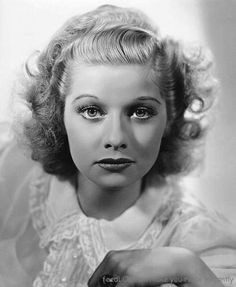 The families of young Lucille Ball and a boy who lived next door were forever changed by a single bullet.

The Lucille Ball we all know and love was the product of lifelong determination; she was a living example of how practice and patience make perfect. Despite legendary comedic talents and abundant career opportunities--Ball was well known as "the queen of the B movies" by major movie studios and audiences for a decade--the beauty eventually decided she'd never really achieve the acclaim she had hoped. She ultimately settled for a little television show that bore her name, I Love Lucy, at the ripe old age of 40. You know what happened next.

What you may not know is that Ball overcame a great deal of tragedy throughout her life, from being rendered bedbound in her youth for three years with a mysterious acute case of arthritis that miraculously resolved itself completely to surviving Hollywood's infamous blacklisting of communists--despite attesting that she had formally (yet naively) joined the Communist Party.

On the heels of President Obama's historic executive action on gun control, Ball's story is also a reminder of the damage that firearms can do at the hands of a certainly innocent child.

In her memoir, Love Lucy, Ball writes that on July 4, 1927, her grandfather, "in a holiday mood, came home from work on the trolley with a mysterious object wrapped in brown paper. It was a birthday present for [Ball's brother] Freddy, who was about to turn 12--a real .22-caliber rifle." Despite Freddy's excitement, Ball's father told him he couldn't shoot the gun until the next day, after he showed him how. True to his promise, Ball's father "set up a tin-can target in our backyard and then in his usual meticulous, careful way explained all about the gun."

Next door to the Balls lived an eight-year-old boy, Warner Erickson, who Ball writes had a habit of stopping by uninvited. He did so on this day. Freddy's "little girlfriend" Johanna took a turn with the gun, and just as she was aiming at a tin can, Warner's mother called out his name from their home. "The gun went off," Ball writes, "and Warner fell spread-eagled to the ground, into the lilac bushes." Ball continues:

"The next few days were a kind of nightmare as we all hung on to bulletins from the hospital. Then we learned the awful news: a .22-caliber bullet is very small, but by fantastic bad luck, the bullet passed right through Warner's spine, severing the cord."

While Ball's grandfather "would have paid the Freddy's medical bills," the Erickson family opted for a lawsuit and won, effectively taking Ball's grandfather's life: "They took our house, the furnishings that [Ball's mother] DeDe had bought so laboriously on time, week after week, the insurance--everything. My grandfather never worked again. The heart went out of him. It ruined Celoron for us; it destroyed our life together there."

Ball's story is a different kind of gun violence tragedy than the ones we are--in our dystopian reality--accustomed to hearing about. It was an accidental shooting on private property, not an inexplicable mass attack in a public space. It didn't leave anyone dead--but it did leave two families in ruins.

Ball doesn't say what happened to Warner Erickson; presumably, he was confined to a wheelchair for the remainder of his days. I was thinking about him yesterday--realizing that when I read Ball's memoir a few years ago, I never thought much about how the Erickson family's life was thrown into chaos by an accidental shooting--after I saw a story shared on Facebook by someone who was in my graduate creative writing cohort.

I was in a couple of writing workshops with Nora Vawter. Yesterday, the Washington Post published a piece written by her that stunned me: in it, Nora reveals that in 1984, she and her mother were shot multiple times outside of a New Orleans library. Then-four-year-old Nora's mother Denise threw herself on top of her daughter, saving Nora's life and sacrificing her own. She didn't die immediately, though; she spent the next 20 years of her life in quadriplegic state, dependent on others for case and in and out of the hospital with pneumonia. Eventually, when Nora was 24, her mother succumbed to pneumonia.

If you're wondering what Nora's story has to do with Lucille Ball's...I'll admit it: I used the story of a beloved celebrity and an accidental, fluke shooting that doesn't really justify demands for better gun-control laws to draw attention to a story that does just that.

Writing workshops often reveal incredibly intimate information about writers' lives--we all tend to write what we know, after all--yet despite the time I had spent around Nora and reading her work, I never knew about this part of her life. And now I am wondering how many other people I know have been affected by similar incidents--many of which are totally preventable. We hear about mass shootings, and we hear mostly about fatal ones. Nora's mother didn't die immediately, but she lost her life immediately and died as a direct result of her shooting; likewise, Warner Erickson lost his childhood and depending on the extent of his paralysis may have suffered health problems similar to those of Nora's mother. Lucille Ball's grandfather wasn't even shot, and yet he gave up on his life as the result of a shooting.

It won't come as a surprise to anyone reading this that I support President Obama's executive action to limit gun violence. According to the Centers for Disease Control and Prevention (CDC), there were over 11,000 firearm-related fatalities in 2013 and over 84,000 nonfatal injuries. In the past, when I heard "nonfatal injuries," I always imagined what we see on cop shows: a bullet to the shoulder, maybe, a bandage, and then life going on. I wonder how many of these injuries are like those of Warner Erickson and Denise Doyle-Vawter, robbing stealing livelihoods without technically robbing victims of their lives.

And I wonder how our country has become accustomed to mass killings of children and young people at schools and colleges. When 13 people were massacred at Columbine High School in 1999, the effect on the country was comparable to that of the September 11, 2001 terrorist attack. When Virginia Tech was locked down in 2011, people asked how this is still happening. Now, it seems, people have simply accepted that these things happen; that's the world today. Or at least our country. I don't have children, but if I did, I would have a hard time sending them off to school knowing that they might not come back.

But homeschooling and paranoid parenting styles aren't going to improve any imminent dangers. Common sense and compassion after we learn about these atrocities, and learn about people like Nora Vawter and her heroic mother, should provoke us to do what's in everybody's best interest and approach gun violence practically, clinging more to our love of life and those who we could lose. But that hasn't happened because the issue has become far too politicized, and so President Obama took a political action that may well save countless lives.