This season's dolphin drive hunts in Taiji, Japan, continue in earnest. We now have reports from CetaBase via the Sea Shepherd Conservation Society's Cove Guardians of numbers from Sept. 1, 2015 through January 17th, 2015, for the killing season. Our thanks to these two organizations for keeping close track of the continuing dolphin slaughter in Taiji, Japan.

As depicted in the Academy Award-winning documentary, The Cove, in the town of Taiji, Japan, hundreds of dolphins are herded into shore every year, to be slaughtered for meat or to be captured and sent to sea pens to be trained for a lifetime in captivity. The season for the dolphin hunts lasts six months, from Sept. 1st through the end of February. 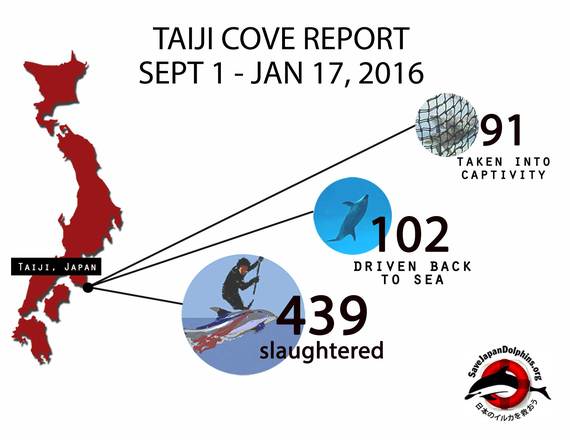 Here are the totals so far this year for the Taiji dolphin hunts:

Both September and October were low kills and captures for the Taiji dolphin hunters, but so far November and January both have seen much larger brutal slaughters of these intelligent and family-oriented animals. This not too unusual - the dolphin migration is usually low at the beginning of the hunt season. Nonetheless, the hunts continue to see lower numbers killed than past years, but continued high captures of animals for captivity.

When Earth Island began our Save Japan Dolphins Campaign in 2004, about 1,600 dolphins were killed in Taiji. Last season, only 751 were reported killed and slaughtered for meat. Our educational work in Japan that dolphin meat is contaminated by mercury, combined with the work of other organizations, is the main reason fewer dolphins are being killed for meat - there is not enough people buying dolphin meat as in the past, due to mercury poisoning concerns.

Last season (2014-15), during the first four and a half months (Sept. 1st, 2014 through January 17th, 2015) of the season, a total of 524 dolphins were slaughtered. So, the hunters are now behind at this time from last season in dolphins slaughtered. The last 6 weeks of the last season saw another 227 dolphins killed, so we can certainly expect more successful hunts in the remaining 6 weeks of the current season.

The numbers so far suggests several important trends. One is that the dolphin drive hunts are turning more and more from dolphins slaughtered for meat to dolphins caught for captivity.

Taiji has become a major source of captive dolphins for aquariums all over the world, and instead of just a handful of dolphins being sold, now Taiji is selling hundreds of dolphins each year. As a trained dolphin can be bought on the world market for as much as US$150,000 or more, the importance of the captivity trade to the Taiji dolphin hunters is obvious, with many countries (such as China & the Middle East) building popular new aquariums.

It is striking that the drive hunts have only managed to catch 4 species this season - bottlenose dolphins, pilot whales, striped dolphins, and Risso's dolphins. So far, no spotted dolphins, false killer whales, or Pacific white-sided dolphins have been captured.

Many aquariums in Japan buy Taiji dolphins, but this season is the first where the Japan Association of Zoos and Aquariums (JAZA) has told their member organizations not to purchase any dolphins from the Taiji drive hunts, due to a successful campaign by Earth Island's Save Japan Dolphins Campaign and other environmental groups to pressure the World Association of Zoos and Aquariums to crack down on JAZA. However, there are many swim-with-dolphins programs and small aquariums in Japan that are not members of JAZA, and Taiji also exports dolphins to aquariums in China, Russia and the Middle East. The Taiji hunters continue to capture large numbers of wild dolphins this season for a life of captivity, despite the JAZA member aquariums' withdrawal from the live dolphin market.

Last season (2014-15), only 108 total bottlenose dolphins were chased into the Cove in total during the entire season. Taiji's quota for bottlenose that season was 509. This season's quota is down to 462. Still, the hunters have only managed to herd in 130 bottlenose dolphins so far, of which 46 were killed and 84 kept for captivity. 67 have been released.

These different catch levels of different species may simply be seasonal variations, but there is reason to be concerned that the hunts targeting these species relentlessly, with high quotas that are virtually never met, are depleting some of these species to the point where they are disappearing from Japanese waters. This would be of particular concern for the bottlenose dolphin species, as it is by far the most popular species to hold in aquariums. Most other dolphin species are quite difficult to keep in captivity for any length of time.

It is highly unlikely that the released dolphins fare well in the ocean. They have been chased and kept in captivity for hours (if not days), they may have suffered injuries in the process and certainly went without any food, and they lost their pod mates to the slaughter or the captive trade. A pod is not just a random collection of dolphins, but is largely built on dolphin families with very close relations. We know that dolphins exhibit signs of grieving for sick or dead animals in the pod. What must it be like for these traumatized animals to suddenly be released and herded back into the ocean? Sea Shepherd has reported several times seeing stranded dolphins along the shoreline that likely died after they were released by the Taiji hunters. Many more likely perish at sea. These dead dolphins, needless to say, are never counted against the hunter's annual quota set by the Japan Fisheries Agency.

The releases of dolphins, especially dolphins other than bottlenose, are often based on the quota system. The government quota is by individual dolphin, so smaller and juvenile Risso's dolphins and pilot whales are released in order to avoid filling the quota with smaller animals that don't have as much meat on them. Some may also be released when the Taiji warehouses don't have any current buyers for the dolphin meat.

The release of bottlenose dolphins in the first month of the season is a scheme by JAZA to try to separate the dolphin slaughter from the captivity trade - to seem more benign by letting dolphins go instead of adding them to supermarket shelves. But it doesn't really mean much - the same people are involved and will kill any other species they find. And after September, they will kill bottlenose dolphins, too.

There are now six weeks to go for Taiji's annual slaughter season. Each day can mean the deaths or permanent incarceration of dozens of dolphins and small whales. These hunts must not be allowed to continue.

For more information on the Taiji dolphin hunts, visit savedolphins.eii.org.