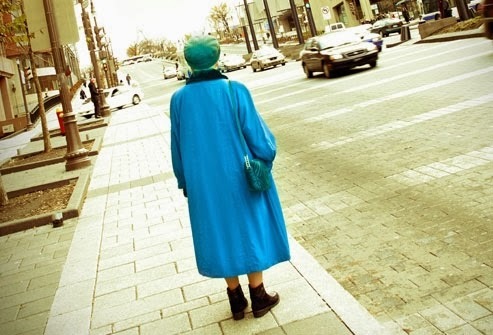 Last month I was traveling by train from Paris to Amsterdam. An elderly woman joined the train in Brussels. She was shown to her seat by two train security guards. The guards were friendly towards her, and as she wasn't handcuffed to the seat, it seemed that their involvement was supportive rather than custodial.

The lady was dressed in a tailored skirt suit and calf length boots. Oddly she wore a sheepskin bucket hat that remained on her head throughout the entire journey. She was seated about three seats behind me, yet was constantly leaning forward to scrutinize her fellow passengers. Her gawking blue eyes made people uncomfortable, and left the impression that there was something abnormal about the woman herself.

Ten minutes after the train departed Brussels, the woman left her seat and started searching the train carriage. Stopping at each seat to glare at the person filling it, before moving to the person in the next row, she made no sound. At the end row, she exited the carriage. She was returned to her seat by a train steward. Apparently she was not looking for the bathroom, but for something or someone she could not explain. This pattern of staring, searching, being returned to her seat by the staff -- continued for the next two hours until we reached Amsterdam.

As the train pulled into Amsterdam, the woman asked me if we were in The Hague. She spoke Flemish, which is similar enough to my second language for me to understand the question. Unconsciously, I responded to her in English. Not only did she understand my reply, she spoke to me in English. I advised her to seek the assistance of the train staff. Eventually a female staff member instructed the lady to stay in her seat until all the passengers disembarked from the train. This staff member promised to return and help the woman clarify her destination plans. The staff member then left the carriage to prepare for the train's arrival in Amsterdam, the final destination for the service.

As the train pulled into the station, the other passengers stood to collect their bags and to put on their coats. The woman also stood up and joined the line leaving the train. Her bag remained on the rack as she disembarked the train. Fortunately, her sheepskin hat was easy to spot, making it easier for staff to intercept her before she wandered into the streets of Amsterdam without plan or possessions.

There is little doubt that this lady had a dementing illness. The holes in her short-term memory removed her ability to make and follow a plan. Somehow she had a valid train ticket, perhaps purchased on a day less hindered by her short-term memory loss, or possibly purchased by someone else wanting to believe that she was capable of safely reaching a specific destination in the capital city of another country. Either way, the dangers of traveling alone without the ability to plan, orientate, problem solve and understand your surroundings and predicament -- are great. Many sad stories exist of people with dementia who have gotten lost and are found dead a few days later. This well-presented lady was incapable of finding her seat on the train, albeit she had been shown the seat at least a dozen times and had her luggage on the rack above it. Her chances of finding her was to an Amsterdam address on a cold winter night, when she believed she was in The Hague -- were very, very slim.