Tuesday's defeat of the Houston Equal Rights Ordinance (HERO) highlights several conclusions that the LGBT movement needs to take to heart for the next decade or so. Foremost is that we will not win transgender issues directly at the ballot box, or in the gerrymandered republican legislatures which dominate the political landscape. 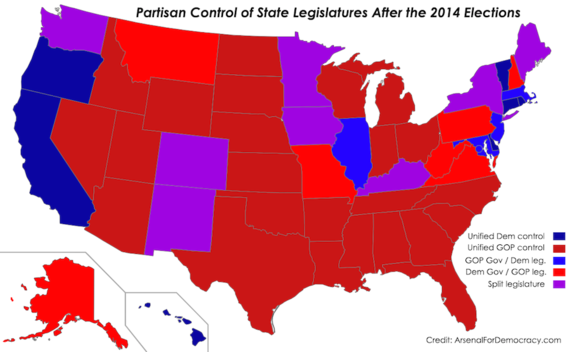 When opponents frame legal protections for transgender people as a choice between a group strangers (who are suspected of being perverts anyway) and the safety your wives and daughters, transgender people will lose every time. So far, anti-LGBT forces have been far more successful at pushing their narrative.
I don't foresee this changing anytime soon.

One has to ask, how many homeless LGBT youth could those $3 million dollars have given shelter to in Houston? What could it have done in terms of community health care? Or educating doctors in Texas on transgender health issues? Or any number of things? Most importantly, though, how do we win on transgender issues going forward if traditional organizing techniques don't work?

Convincing large numbers of people driven by fear and religious beliefs simply will not happen. And 99 times out of 100, these aren't the people who matter. The people who matter are policy-makers who have the ability to change the regulations which make life difficult for transgender people on a day to day basis.

Bureaucrats, administrators, judges, HR benefits, directors, school superintendents, police chiefs: these are the kinds of people who need to be courted, convinced, and motivated to action.

Time and time again over the past seven years we have seen gains for transgender people have come from convincing individuals in positions of authority to make simple policy based changes. Passports, Medicare coverage of transgender health, driver's license gender marker changes without surgery, inclusion of gender identity protections and health care in the private sector: all of these were accomplished with smart and surgical approaches.

Similarly, when we win in court, it is because we have made better arguments in front of someone who is supposed to be a neutral arbiter. Judges are not supposed to be swayed by emotion, fear, or religious beliefs. Their job is to interpret the law, and the law is often decided based on scientific evidence.

We make progress when the courts and policy makers agree with the scientific evidence that holds gender identity is innate (it seems to be, with over 100 studies in support), it is immutable (there's no credible evidence suggesting gender identity can be changed), and that medical care for transgender people meets both the legal and medical definitions of "medically necessary."

For the most part, the people making these decisions start knowing very little about transgender issues, and aren't personally invested in the material. Just as importantly, there's very little blow back when someone issues a nuanced piece of case law, or a policy change is announced in a state insurance regulatory bulletin. In short, the individuals here are able to do the right thing, without fear.

These are the people we as a movement should be targeting. Trying to convince the general public is an (expensive) fool's errand.

This is why LGB people won the marriage fight: not because they won at the ballot box or in the legislatures, but because they had better evidence on their side from the scientific and legal community: including sociologists, psychologists, and doctors. The opposition's attempt to counter science with bad science failed miserably. When the Regnerus study had its day in court, the judge determined the anti-gay study was, "entirely unbelievable and not worthy of serious consideration."

Despite the lessons of winning marriage in the courts, state and national organizations seem hell-bent on doing expensive and futile campaigns to shift opinions that cannot be shifted right now. The three million dollars in Houston could have been used to fund studies that would counter right wing talking points about transgender people, and continue to build the consensus of people who are experts in the field. Alternately that money could have been used to hire a transgender policy experts and advocates dedicated to working transgender issues full time in half the states in the US.

There is also plenty of evidence that this strategy works. The National Center for Transgender Equality has been working and insider, science and policy based strategy inside the Beltway for over a decade. A staggering number of the improvements in federal policy under the Obama administration are attributable to their work, and the strategy they employ. On a micro scale this tactic works as well. Ohio is one of the most legally hostile states to transgender people. However, it has one of the most progressive policies for changing driver's license gender marker as a result of wonkish advocates like Julie Van Dyne pursuing a policy based strategy with in the Ohio Bureau of Motor Vehicles.

There are four ways to change the legal framework that transgender people live under: legislation, ballots, case law, and policy changes. The sooner we stop wasting our time tilting at legislative and ballot windmills, the better. Doing the latter requires building the strongest scientific consensus possible.

Some may question whether I am qualified to comment on these matters. All I can say is that I believe in results.