In the last hours of August 2015, Manchester United signed Anthony Martial, a young teenager who played less than 75 games as a professional player, for the tidy sum of £60m. Basically the same cost as a Boeing 737, if you like to travel, or about 80.000 iPhone 6, if you prefer smartphones.

Huge prices and enormous hype are things that have become all too familiar during the football transfer season, but have we gone as far as to accept them as the norm? What factors are driving the transfer market's soaring prices?

Unlike wine: the older, the cheaper

Some of the best and most established players in the game fetch "low" prices on today's football transfer market. Xavi Alonso stands as a perfect example: with an illustrious history behind him, holding two European Champion titles and with a victory in the 2005 Champions League under his belt, one might expect him to be up there with the most expensive transfers of recent seasons.

Yet, his arrival at Bayern Munich last season only put Real Madrid out of pocket by a rather low £6.5m. Like any other type of buying and selling, a commodity's value is heavily affected by its projected shelf life. Much like when we're in the market for a second-hand car, football clubs have to ask themselves: how far will this player get me, and for how long?

In the case of a midfielder like Alonso, realistically he only has two or three years of good game left in him, whereas a young star with promise like Martial could be a sound investment for near on a decade. The name of the game isn't so much what's behind you but what's in front, with the perverse effect of high transfer prices also being attached to high levels of risk.

This is the reason why some players, like some old coquettes, pretend that they are younger than their real age. This is especially true in Africa, where forging documents is easier than in Europe. Newcastle's Chancel M'bemba has four different birthdays, according to his official papers: a nice strategy to get more presents.

Where the player is currently signed and for how long certainly influences their price on the market. If a player, however desirable, is signed for another three or four years with a club, the buying club is likely to be looking at a hefty buy-out price in order to seal the deal, if the owning team is even willing to sell.

When this drops to a year, the tables turn. If the owning team is looking to replace a player with a year left on the books, they're likely to push a sale forward during the last year, when they can get a little extra money back on their original purchase from the new buyers. This is far preferable to allowing a contract to expire and letting a player go for free.

Striker Gonzalo Higuaín, for example, has a release clause of £66m in his contract with Napoli. Despite his own desire to leave Italy and Chelsea's show of interest in the Argentinean striker in summer 2015, the enormous price of breaking his contract was clearly deemed too high to merit the signing.

All other things the same, position on the pitch can still determine a wide price gap between two players. A striker, in the eyes of the transfer market, commands a far higher price than a goalkeeper for one major reason: the players that win games and sell tickets are the players who score the goals.

In this case, the facts tell the story: the ten largest ever transfers in history have all been earned by offensive players, not defenders and goalkeepers. It's for this reason that negotiations for a striker like Alexandre Lacazette only open at around the £36m mark, as Liverpool found out in their approach to buy the French player this summer. Having scored 69 goals for Lyon so far, it's not a great surprise that he is so highly valued. 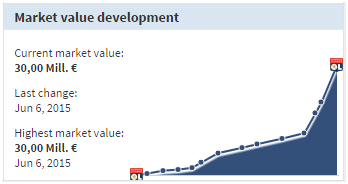 Unlike most commodities, the identity of the buyer is a huge factor in determining price. A big name team like Manchester United or Chelsea will often attract a bigger price tag from selling teams simply because everyone knows that their pockets are deep enough to meet the cost.

Nowadays you would be forgiven for forgetting who Darren Brown is, but there was once a time, 2008 to be precise, when Charlton Athletic demanded £16.5m of Tottenham to have him, and got it. This can, however, work both ways: though a smaller club might demand a bigger sum to sell, the likes of Manchester United can easily beat it down to a price which, though of little significance to their bank account, will still placate a small time club.

Having moved from nightclubs to football clubs, Portuguese agent Jorge Mendes recently cemented his reputation as the biggest boss in the football market. The influence of agents on football transfers is not to be underestimated. In 2014, he made history by brokering four of the seven biggest deals of the summer window, including James Rodriguez and Angel Di Maria.

It suffices to say that when a percentage of the final deal will end up lining your own pocket, you'll work even harder to up the price. Mendes is proof of that, bringing his four biggest transfers of 2014 in at an enormous £195m. If a player comes to the negotiation table with an agent like Mendes at his side, be prepared to see the price rocket.

The last point worth mentioning is a player's personal brand. It is by no means one of the most important factors in determining a football transfer fee and is often disregarded completely, but in some cases it can have a significant impact.

Towards the end of their careers, big name players like David Beckham and more recently Steven Gerrard have been known to fetch high prices from clubs looking to boost their club's international standing. In the case of Beckham, LA Galaxy secured an astronomical five-year deal worth $250 million to have the indisputably talented but aging superstar of 32 in 2007. On the strength of this signing alone, Galaxy went from relatively unknown to wielding $20 million sponsorship contracts and selling an unprecedented amount of season tickets simply because of his fan following. Sometimes a big name, despite all the other factors, fetches a big price.

When there is a big name or a rising star in the picture, media hype is a given. Newspapers regularly fill their sports pages with transfer rumors feeding into a lively fan dialogue on which player is going where, when and at what price. Though it can't be claimed that media hype and fan interest is a driving influence in transfer proceedings, the power of supporters to raise a player to stardom is hard for clubs to ignore.

There's a reason why the football transfer market is called a market. Following the same rules of supply and demand, if a certain player brings their club a lot of success, their value and price will be far higher to any prospective buyers. In the same way, a player who plays infrequently for a club and fails to deliver results will fetch a rather lower price. Factors like age, position, status and a player's current contract can, however, have a huge impact on a deal and bring a certain amount of unpredictability to the transfer windows each year.

On the other hand, unlike any market the identity of the buyer is of tremendous significance. What would be perceived as crude discrimination anywhere else is just standard practice in the realm of football transfers.

With set rules and codes, high levels of fan enthusiasm, betting markets and tips, football transfer season is almost a sport in itself. Its law of value, however, is pure and simple economics.