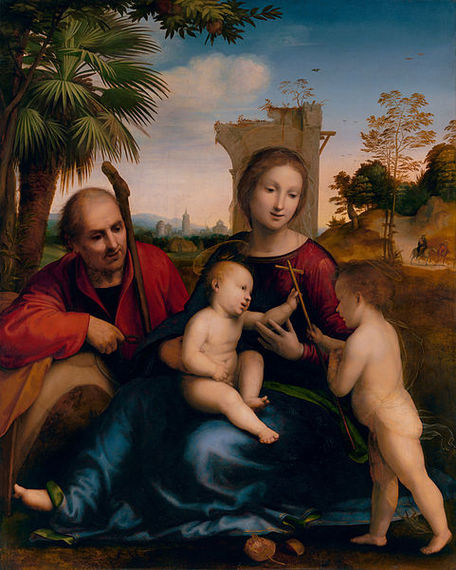 Rest on the Flight into Egypt with Saint John the Baptist (c.1509) by Fra Bartolommeo--wikimeda.org

The four Gospels--Matthew, Mark, Luke, and John-- provide skimpy biographies of Jesus, with huge time gaps. We meet Jesus in brief citations as a newborn, a six-year- old in Egypt about to return to Nazareth, a twelve-year-old at the Temple in Jerusalem, and at age thirty, when his spiritual mission begins as he is baptized by John the Baptist. Not much fodder for a reliable psychological profile.

The controversial second-century Infancy Gospel of Thomas offers some additional details about Jesus up to age twelve. But the purported supernatural powers of the child Jesus fly in the face of the earlier canonical Gospels' depiction: "The text [Infancy Gospel] describes Jesus as a brilliant child, performing a number of miracles in Nazareth, completely contradicting the portrayal of the Nazoraeans as described in Luke Chapter 4. Luke describes the natives of Nazareth responding in shock to Jesus' initial messianic teaching, seemingly unfamiliar that Jesus was anything more than a poor carpenter's son."

The New Testament tells us even less about Jesus' mother, Mary. We first meet teenage Mary when she is visited by the Angel Gabriel and told that she will conceive and bear a child by the power of the Holy Ghost (Luke 1:26-35; Matthew 1:18-25). Despite Mary's pregnancy, Joseph, a Jewish carpenter to whom she is betrothed, accepts her (Matthew 1:24). Next, Mary visits her cousin Elizabeth, who is pregnant in her old age in answer to the prayers of her pious husband Zacharias, a priest in the Jerusalem Temple (Luke 1:38-40).

Mary and Joseph go to Bethlehem, where Jesus is then born. In the Gospel of Matthew's account Mary, Joseph, and infant Jesus escape to Egypt to evade King Herod's decree to kill all male children in Bethlehem two years of age and younger (Matthew 2:16).

Six years later they return to Nazareth. In a brief mention we learn that Mary, Joseph, and the family traveled to Jerusalem each year to celebrate Passover (Luke 2:41). On one return trip after Passover, when Jesus was twelve, Mary and Joseph noticed that he was missing. They turned back to Jerusalem and found Jesus in the Temple debating rabbis on the Torah (Luke 2:39-52). In another mention, Mary and the family think Jesus is mad when he is giving a sermon in Nazareth (Mark 3:20-21). The Gospel of John tells us that Jesus and Mary attended a wedding in Cana, where Jesus performed his first miracle: turning water into wine (John 2:1-3).

We next encounter Mary as one of the witnesses to the crucifixion (Mathew 27:55-56; Mark 15:40; Luke 23:49; John 19:25).While it's not explicit in the Gospels, Mary, mother of Jesus, may have been one of the Mary's or "other women" at Jesus' empty tomb (Luke 24:10). If so, that would have been her final appearance in the Gospels. At the beginning of Acts of the Apostles, the New Testament book that follows the Gospels, there is a brief mention of Mary attending a prayer session in Jerusalem with the disciples after the crucifixion (Acts 1:12-14). Then Mary disappears from the story.

The controversial non-canonical Secret Infancy Gospel of James, dated to the mid second century, purports to fill in some details of Mary's birth and early life. However, the additions have been contested for inconsistencies and practices that are at odds with Judaism and with Mary's later life in a rural community of working-class trades people. Even so, the Infancy Gospel's report of Mary's birth to her elderly parents Anna and Joachim and Mary's life growing up in the Temple in Jerusalem still do not provide an informative biographical profile that illuminates who she was as a person.

Despite the paucity of information about Mary she has emerged as a towering figure in Christianity. She has inspired countless books about her life. Amazon lists over forty-one thousand volumes--and these are only the more contemporary ones. Devotional books abound.

Who was Mary? What was she like in her daily life? What were her beliefs and personal qualities? We can speculate--as many have--but known biblical sources give us little information to go on. We could learn more about a casual acquaintance than we know about Mary by posing the simple request: "tell me something about yourself."

However, one aspect of Mary's life consistently stands out in the Gospels: She is a dedicated practicing Jew.

The few events documented about her are steeped in Judaism. Her pregnancy forecasts the coming of the Jewish Messiah. In accordance with the Torah mandate, Jesus is circumcised on the eighth day following his birth. Afterwards, Mary performs the postpartum Temple purification rituals, also prescribed in the Torah (Luke 2:22). When Mary, Joseph, and Jesus return from exile in Egypt we are told that she and the family traveled to Jerusalem every Passover (Luke 2:41)--an arduous seven-day journey over rough terrain.

The wedding in Cana that she attended with Jesus was obviously a Jewish wedding, attended only by Jews. Jews of the era did not associate with non-Jews. That Mary took a special interest in this Jewish wedding is reflected in her concern that the wine was running out. In every activity we see Mary's Jewish signature.

Given Mary's well established Jewish identity it is surprising that she is not portrayed as such in the trove of artworks of the Medieval and Renaissance eras, when Christian art flourished. Instead, she is depicted as a Christian, with no trace of Semitic features, dress, or surroundings. Mary's Jewish identity, which dominated her life, vanishes in these artworks, replaced by northern European characteristics and backgrounds. I have written extensively about the omission of Jesus' connection to Judaism in artworks. The disconnection of Mary from her Jewish heritage is part of the same falsification.

Paintings of Mary's betrothal to Joseph provide glaring examples. The betrothal (some say marriage) theme was popular with the patrons who commissioned artworks, which explains why so many of them were produced by almost every major Renaissance artist. Typical are the paintings of the betrothal by Michael Pacher (c.1495 ) and Raphael (c.1504). 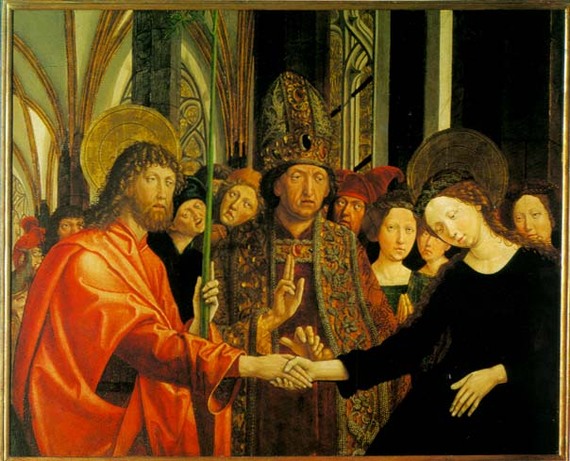 Betrothal of the Virgin by Michael Pacher -- wikimedia.org 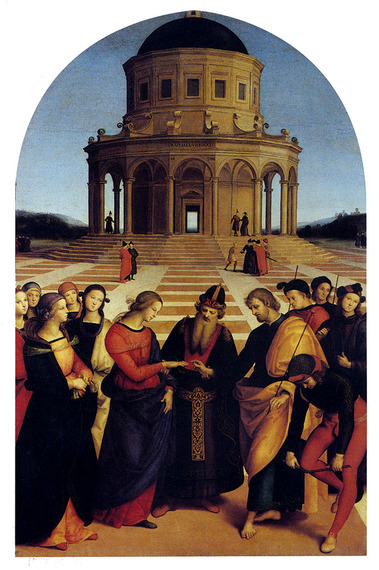 Marriage of the Virgin by Raphael--en.wikipedia.org

In both paintings Mary and Joseph appear as stylish fair-skinned, fair-haired Christians.To emphasize that these are Christian ceremonies they are conducted by high church officials. But these ceremonies and settings are alien to the origins of this Jewish couple from a rural village in Nazareth--when, in fact, the actual betrothal and their lives had everything to do with Judaism. All indications from the Gospel depictions say that Mary was immersed in Jewish life and practices.

Why should we care about these misrepresentations? A contentious and often violent relationship between Christianity and Judaism began in the first century, as the emerging Christianity sought to establish itself as separate from its deep roots in Judaism. Remnants of that divide continue to reverberate today. And art (particularly paintings and stained glass windows) was a major vehicle in Medieval and Renaissance Europe for teaching the populace about Church doctrines and perceptions--ones that often embodied anti-Semitism.

But how could separation be achieved by fostering hate, demonization, and persecution of Jews if two of the most iconic figures in Christianity were dedicated practicing Jews, not the Christians devoid of Judaism as portrayed in art representations?

In the early years of Christianity, separation was a bumpy road, since the new religion was tied to Jewish prophesy and lineage. That's why after a unified church was established at the Council of Nicaea in 325 CE the vilification of Jews and Judaism was stepped up, reinforced by a charge that became an unquestioned mantra: "Christ killers."

Jews were then marginalized, persecuted, and frequently massacred. The Christianization of Jesus and Mary in artworks and other cultural depictions separated them from Judaism and widened the Christian-Jewish divide, enabling rampant anti-Semitism to infuse European societies through the Middle Ages and Renaissance periods. Further aiding the divide, the church banned individual ownership or reading of the New Testament or translations of the bible from Latin into native languages--a moot point since over ninety percent of the population was illiterate. Thus, for over a thousand years the populace would not encounter the Jewish Jesus and Mary of the Gospels.

Artworks, perhaps somewhat inadvertently, contributed to virulent anti-Semitism by picturing Jesus and Mary as Northern European Christians with no connection to the dark menacing "vile Jews," as they were represented in artworks.

But today we are in a new era of reconciliation led by Pope Francis. His bold pronouncement that "inside every Christian is a Jew" reaffirms the common foundation of Judaism and Christianity and seeks healing of ancient wounds and wrongs.

I wish that art historians, curators, and art critics would follow Pope Francis' lead and finally acknowledge the falsification of biblical history in artworks that denied the Jewish identities of Jesus and Mary.

In excruciatingly detailed commentaries on artworks by professionals in the field the glaring feature of identity theft is almost never noted. Doing so would take nothing away from the magnificence of these works and their contribution to the development and enhancement of art and culture. But it would contribute to a long-overdue participation in the reconciliation of Christianity and Judaism. It would affirm the two sides of the Jesus and Mary story: Jesus and Mary the dedicated Jews and Jesus and Mary whose lives inspired a new religion.