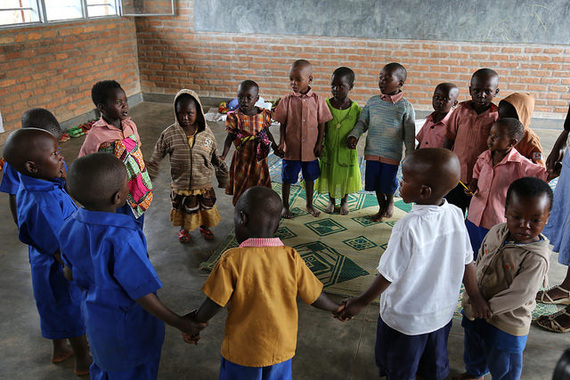 The evidence is vast: exposing children before the age of five to stimulating environments strengthens their language development, social and emotional health, problem solving abilities, memory function, use of logic, analytical skills and ability to cope with new situations - leading to significantly better performance later in school. Positive results are even more pronounced among children from low socio-economic backgrounds.

A growing number of countries around the world, has in recent years embraced this evidence and begun investing in early childhood education.

Around the world, early childhood development programs have proven that they are not just a smart investment in the future intellectual, physical and social well-being of children but also drivers of economic prosperity. For every dollar countries spend on pre-school programs, research shows, there is a $7 to $8 return of economic, health and social progress.

The strategy set out to use early childhood interventions to address some of the challenges Mozambique's education system faced: In 2012, for example, only about half of the country's students completed primary school, a mere 23% made it through their lower-secondary education and about 14% of primary-age children were not in school at all.

But just a small number of early childhood care and education programs were available at the time - most of them in Mozambique's urban areas -- and there was little information explaining to parents the benefits of those programs. Building on a successful pilot of community-based pre-schools implemented by Save the Children in the Gaza Province, Mozambique established 600 more pre-schools in rural, deprived areas across five provinces. This is a good investment with an excellent rate of return considering the long-term benefits of early childhood education.

Most successful early childhood education initiatives include a range of interventions that go beyond a pre-school classroom: pre-natal maternal health, proper nutrition for breast-feeding mothers through their child's first six months, and adult caregiving skills.

For its part, Mozambique invested not just in school infrastructure for early childhood education but also in training community teachers to provide nurturing and age-appropriate activities in pre-school classrooms. And specific programs for parents -- particularly teenage mothers and those in low-income and disadvantaged communities - helped them understand how to turn their homes into engaging learning environments essential for the strong cognitive development of children under age two.

Mozambique's early childhood interventions complement a range of other improvements in primary education, funded in part by two Global Partnership grants totaling $US169 million from 2008 to 2015.

Those efforts have so far shown tangible progress: net enrollment of six-year-old children in Mozambique between 2009 and 2014 rose from 67% to 82%, and almost half of all students are now girls. The gap between the number of students going to primary school in the richest provinces of the South and the poorest provinces of the North has also narrowed.

The full impact of Mozambique's investments in early childhood remain to be seen. But an evaluation of the earlier pre-school pilots showed that, compared with others, children who participated in pre-school were far more likely to enroll on time in primary school and their motor and cognitive development were far more advanced.

It's also a message that we should heed here in the U.S., where more than half of 3 and 4 year olds (mostly from lower-income households) lack access to pre-school, putting us 28th out of 38 developed countries on early education enrollment among 4-year-olds.

The time has come for every nation, from Mozambique to the U.S., to embrace an unavoidable reality: No society can afford not to ensure that all its youngest children get what they need to excel later in school and in throughout their lives.