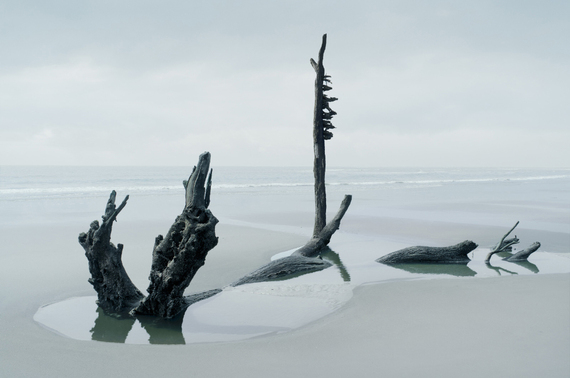 We float inside the vastness of our own emptiness.


The more physical space we occupy, the more space occupies us. This emptiness doesn't refer to a perceptible absence, but to a fundamental ubiquity that flows throughout the whole Cosmos. The effort to reveal the nature of matter eventually dissolves into the void that encloses it. Still, the mystery of its imperceptible nature is already revealed inside us. The emptiness is the womb our consciousness still bears the memory of. This void can be experienced by the body as well, for the body also bears the memory of the very first breath, the intensive purity of an unconceptualized experience of existence. Since then, the very first moment, emptiness is present in every conscious breath we take.

It echoes back to the 5th century BC, when the Greek philosopher Leucippus sensed this void in the existence of a steady and invariable energy, a result of action and reaction, birth and decay. A vast space was expanding inside the nature of all things in which constant movement was generating the effects of form, shape and, above all, life. Three centuries later, the Roman poet Lucretius in his work De Rerum Natura was giving us, with profound confidence and eloquent elegance, the following verses.

About the body, there's in things a void
which to have known will serve thee many a turn,
nor will not leave thee wandering in doubt,
forever searching in the sum of all

We are all connected through this emptiness, which is not contained within our body, but it contains the whole Cosmos instead. A space that expands under our perception, throughout the physical world, imperceptible and vast, continuous and indefinite. Consciousness is pouring out of this emptiness and when it experiences it again, this time through the body, it feels like water poured into water. It is because they share the same nature, they're inseparable and indivisible. Emptiness and the experience of nothingness are not describing a state of non-existence, but they mean that things lack an independent, inherent, isolated self-existence. Exactly like liquids, in which the slightest movement of a single particle sequentially influences all the others.

Back to the 5th century BC, the same period when Leucippus was reflecting on the void, some thousands of miles away from the Greek world another teaching was expressing the nature of reality. There is an enchanting poem in the Pali Canon, the collection of primary texts which constitute the doctrinal foundation of Theravada Buddhism, in which form and feelings are compared with foam.

Form is like a glob of foam
feeling, a bubble
perception, a mirage
fabrications, a banana tree
consciousness, a magic trick.

This has been taught
by the Kinsman of the Sun.

However you observe them,
appropriately examine them,
they're empty, void
to whoever sees them
appropriately.

Today, twenty five hundred years later, scientists tend to compare the fabric of the universe with foam as well. The Quantum Foam refers to the electromagnetic fields that permeate space-time, due to randomly appearing and disappearing particles, called virtual particles, a bustling activity that looks like the bubbles of the foam. The vacuum space is not nothingness at all, but a space of an explosive activity loaded with such fields, whether within the inter-galactic voids or within the space between atomic particles. Leucippus himself was suggesting that the universe is empty but in the same time full, because all things are essentially infinite and the only change that takes place is the transformation of form. The void is a constant source of energy and matter; and it seems to be unpredictable.

According to Epicurus, one century after Leucippus, this constant, unpredictable activity results in what our consciousness perceives as free will. He suggested that atoms, as they move through the void, sometimes they will swerve from their already determined paths and they will cause a whole new chain of events. His school of thought offered an indeterministic view of the Cosmos, in which the unpredictability of events leads to our freedom. The void permits the experience of the free will. Lucretius, once more in his work De Rerum Natura, ties the liberty of man to the atomic swerve, the uncertain falling of particles into the void that leads to unexpected results.

Again, if ev'r all motions are co-linked,
and from the old ever arise the new
in fixed order, and primordial seeds
produce not by their swerving some new start
of motion to sunder the covenants of fate,
that cause succeed not cause from everlasting,
whence this free will for creatures o'er the lands,
whence is it wrested from the fates

We float inside the vastness of our own emptiness, surrounded by the lightness of the void. Forever free in the infinite openness of existence.