We're not talking best. We're not talking brightest. We're talking most desired. After comparing the New York Times' list of 2010-2011 application increases, Collegeprowler.com's "Top Colleges" list (which includes student rankings of academics, the student body, nightlife and campus facilities), Princeton Review's 2010 list of the "Happiest Colleges" and the "New Ivies" lists from Newsweek and unigo.com, we put together a group of schools that, as of 2011, are doing something right.

With drastic application increases and soaring student reviews, we give you 2011's TRENDIEST COLLEGES. 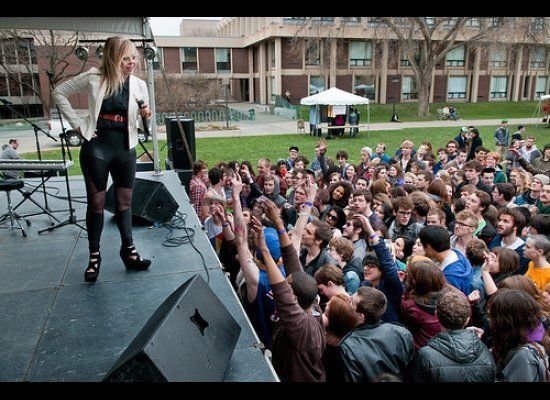 1 / 9
Macalester College: Trendiest "Quirky Intellectual" School
The small liberal arts school in Saint Paul Minnesota would have made this list due to the sheer influx of 2011 applications alone. Specifically, from 2010 to 2011, applications increased by <a href="http://thechoice.blogs.nytimes.com/2011/01/31/total-apps-2011/" target="_hplink">40.63%. (with 4,217 applying in 2010 and 6,071 applying in 2011</a>). In a recent <a href="http://www.macalester.edu/news/2011/04/record-breaking-number-of-students-apply-to-macalester" target="_hplink">article</a>, Dean of Admissions Lorne Robinson attributed the increase to several changes in the admissions process, namely that Macalester adopted the Common Application and offered to waive the $40 application fee if students filled out the first part of the application by November 15. And though a great percentage of the increase may be attributable to technicalities, the school's appeal isn't unfounded. The school was ranked 22nd in the nation in <a href="http://www.washingtonmonthly.com/college_guide/rankings_2010/liberal_arts_rank.php" target="_hplink">Washington Monthly's</a> College Guide. It was named "America's Hottest Liberal Arts College" by the 2006 Kaplan/Newsweek "How to Get into College" Guide. It was listed as one of <a href="http://www.newsweek.com/2006/08/20/25-new-ivies.html" target="_hplink">Newsweek.com's 25 "New Ivies</a>." And in 2007, the Princeton Review rated the college as having the #1 best quality of life. Said one student <a href="http://collegeprowler.com/macalester-college/" target="_hplink">reviewer of her experience</a>, "We're rated among the <em>10 Nerdiest Colleges</em> in the United States, but we always have fun. Every weekend there are campus-organized dances and other activities, student initiated hang-outs, and off-campus options." Haven't you heard? Nerdy's the new hip. And whatever this school has been doing, it's been working!
macalester.edu