With the exception of September 11, 2001, no disaster has ever traumatized New York more than the Triangle Shirtwaist Factory fire of March 25, 1911 - 100 years ago this weekend.

It broke out on a balmy afternoon after someone carelessly tossed what was probably a cigarette butt into a waste fabric basket in an overcrowded Greenwich Village sweatshop.

Flames rapidly spread throughout the tinderbox building on Washington Place. It became the greatest industrial disaster in the history of the city of New York, resulting in the fourth highest loss of life from an industrial accident in American history: the horrid deaths of 146 young garment workers who either perished in the flames or jumped to their deaths in a frantic attempt to escape the inescapable. 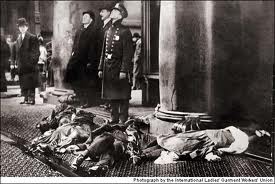 Most of the victims were recent immigrants - girls and women aged sixteen to twenty-three, Jews and Italians from the nearby tenement apartments of the Lower East Side who worked six day weeks. Many of the workers could not escape the burning building because the company's managers had locked the doors to stairwells and exits to prevent theft. Wall-attached fire escapes on the outside collapsed under the weight of desperate workers trying to get to the street. Other workers simply jumped from the eighth, ninth, and tenth floors because the NY fire-department ladders could not reach high enough to save them.

Crowds gathered below in horror as bodies crashed to the street. Some days later when 100,000 workers marched in memorial, more than 200,000 people lined the streets in mourning.

But the tears that were shed for the Triangle Fire's victims also spurred on the fledgling American labor union movement and brought about legislation requiring factory safety standards across the country. Francis Perkins, who witnessed the actual disaster and later became FDR's Labor Secretary, once said the Triangle Fire was the day the New Deal started.

To commemorate the centennial of The Triangle Fire, and remember its victims, there is a long list of events in and around New York. One of the nicest of them took place down at the Old Henry Street Settlement - that Lower East Side bulwark of immigrant aid founded by the legendary Lillian Wald and whose services many of the fire's victims had undoubtedly also availed themselves. At a tea and reception on March 20, a small crowd gathered in what had been Ms. Wald's dining room to hear historian Joyce Mendelsohn, author of the lively Lower East Side Remembered and Revisted, describe the tragedy's terrible events and aftermath. Vivian Sorenson, granddaughter of a Triangle Fire survivor, movingly described how the event marked her grandmother's long life in radicalism (she lived to be 103). Historic gastronomist Sarah Lohman helped prepare a menu of circa 1911 teatime delicacies (including lemon and nutmeg cake).

The official centennial commemoration is organized as it been every year by the textile workers union, Workers United (formerly the ILGWU). It takes place at 11 AM on Friday, March 25 at the Brown Building (former home of the Triangle Waist Company), at Greene St. & Washington Place, Greenwich Village.