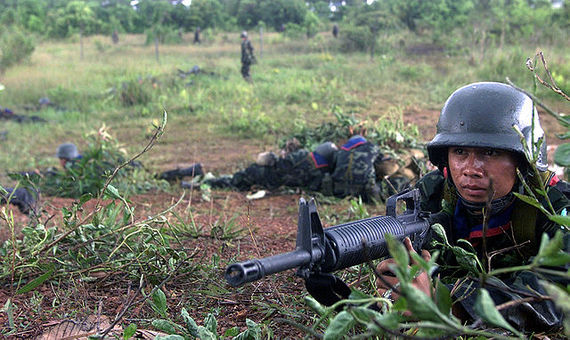 As President Obama welcomed representatives from 10 Southeast Asian nations to California for the US-ASEAN meeting at Sunnylands last week, it became quickly apparent that not everyone was happy with the guest list.

Human rights advocates questioned the wisdom of inviting Thai Prime Minister Prayut Chan-o-cha, who, after gaining control following a coup in 2014, has clocked up a very worrying human rights record, which counts an "attitude adjustment" program and liberal use of the lèse majesté laws among its dubious achievements.

Some, such as Human Rights Watch suggested that Obama should take this opportunity to have some uncomfortable conversations with Asian leaders about their predilection for 'jailing journalists, cracking down on peaceful protestors and dismantling democratic institutions after coups', while others, such as RED-USA pointed out that in hosting the visit, the USA is actually violating its own laws, and suggested that Chan-o-cha's visa should be cancelled.

Predictably, this didn't happen, and is made even more frustrating given that it was a perfect opportunity for Obama to take Thailand to task over the pièce de résistance of junta-led reforms - the latest draft of the new constitution, released on January 29.

Although touted by the Constitution Drafting Committee (CDC) as an "anti-corruption charter", many onlookers contend that "anti-democracy charter" would be a more fitting moniker, arguing that it will weaken elected government while giving the junta even greater powers.

The first attack on democracy comes in the form of the suggested reforms to the House of Senators. All 200 members of the upper house will be appointed, giving the junta the green light to shape a tame Senate - most likely made up from the ranks of senior military and the police - who will be able to veto legislation, appoint judges to the Constitutional Court and resist amendments to the Constitution.

The second major issue is the role of the National Reform Steering Assembly (NRSA), which like its predecessor, the National Strategic Reform and Reconciliation Committee (NSRR) is an unelected puppet of the military. Named by the junta, the NRSA will shape and guide the legislative agenda. Unlike the previous constitutional draft (rejected last autumn), the Cabinet is not obliged to implement the NRSA's ideas, but only to 'cooperate' with it. But dissent is futile - any conflicts must be decided by the Constitutional Court, which, of course, is fully stocked with members nominated by the aforementioned unelected House of Senators. And so the NRSA will function to sanction the junta's plans as it did last week when it passed the controversial National Strategy Bill, which charts the nation's course for the next 20 years, regardless of who is in power. Governments who fail to adhere to these plans will face 'penalties' - though both the crime and the punishment remain amorphously defined at present.

Another significant issue in the draft constitution is the proposed reforms of the electoral system, from a mixed member majoritarian system (MMM) to a mixed member apportionment system (MMA). Although ostensibly more democratic, the consequence - and no doubt certainly not an unintended one - is the bolstering of midsized parties and the weakening of current front-runner Pheu Thai Party, responsible for Thailand's two deposed Prime Ministers: Thaksin and Yingluck Shinawatra. Ensuring neither of them can make a come-back has been one of the junta's main objectives, and the MMA system creates the ideal conditions for a fractured, easy-to-dominate parliament.

Proposals for who can be elected into power are also troubling. Current plans involve parties being asked to submit three names as potential prime ministers, and no mechanisms in place to ensure that these names are those of elected officials. In short, as long as they are sponsored by a political party, anyone can become the next Prime Minister of Thailand, whether a member of the House of Representatives or not.

For many, this constitution is simply a means to ensure the Junta's long-term control, masquerading as a crusade against corruption. Others believe it is simply a means to stall planned elections and prolong Prayuth's rule. Thailand's former Prime Minister, Thaksin argued that the constitution was "crazy" and simply "a charade to show the world that Thailand is returning to democracy, when in reality, it would be like Myanmar before its political reforms." He also suggested that while the constitution allows for a prime minister "the real power would be in some politburo above him, and the economy would suffer."

For what the junta has drafted is a constitution with a triple threat at its heart. Firstly, the sweeping oversight powers bestowed upon the NRSA act as a noose on the Cabinet's legislative autonomy. Secondly, through the House of Senators the junta can influence the Constitutional Court as well as scuttle any piece of legislation that might rub the army the wrong way. And lastly, the electoral reforms will ensure that the Parliament is weak and divided. In combination, these measures mean that while Thailand might ostensibly give a voice to its people, the tools are in place to ensure that they can be shouted down whenever they say anything in opposition to the junta. It's democracy in theory, but certainly not in practice.

With another power shift in the country likely to duplicate the problems caused by the junta, many commentators argue that the only way to encourage sustainable reform is for the international community to apply pressure through policies such as trade sanctions. Whether this will come to pass remains to be seen, but it is undoubtable that in not making the international community's displeasure of the direction of travel in Thailand apparent, Sunnylands has been an opportunity missed.