On May 13, Russian Deputy Prime Minister Dmitry Rogozin announced that Russia will stop its ISS activities in 2020 in response to U.S. sanctions over Russia's annexation of Crimea. According to some reports, they have even forbidden the ISS from flying over Ukraine after 2020. This may just be political posturing, and a lot can happen between now and 2020, but if Russia goes through with its threat we may have a problem that goes beyond ferrying astronauts and supplies to the ISS. 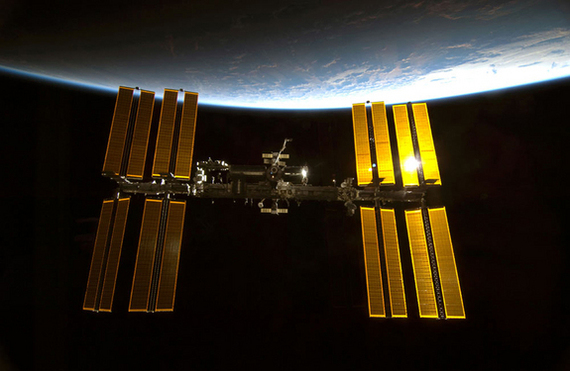 With the help of commercial companies such as Space-X and Orbital, the United States has recovered most of its ability to re-supply the International Space Station with food, water and equipment on what is becoming a regular schedule. The latest commercial re-supply was by the Space-X, Dragon spacecraft launched on April 18. Orbital Sciences Corporation completed its first Cygnus re-supply mission to the Station on January 9. The European Space Agency also has an Automated Transfer Vehicle (ATV) launch on July 25, 2014 called the Georges Lemaitre, and the Japanese Space Agency has two re-supply missions scheduled for 2015 and one scheduled for 2016. Beyond 2016, the dominant re-supply missions will be presumably be provided by Space-X and Orbital Sciences. Meanwhile in 2014 there have been two re-supply missions provided by the Russian Progress spacecraft on February 5 and April 9. The next one is on July 23, followed by one on October 29, and four in 2015.

This all sounds very promising, but there are two more issues.

First, these are un-manned missions. The rotation of astronauts on the Station is still being handled by the Russian Space Agency through contracts to the participating partner countries. Astronauts are ferried up in the Soyuz TMA vehicles, three at a time. Currently, the United States pays about $70 million per astronaut to bring them to the ISS, and return them to ground after their rotation is over. The next scheduled manned flights will be in May, September and November of 2014, and March and May 2015. The expectation and hope is that by 2016, the Space-X, Dragon capsules will be human-qualified and able to transport astronauts safely to the ISS. Also by 2016, Boeing will be flight testing is own manned capsule capable of docking with the ISS. NASA, meanwhile, plans to have its Orion spacecraft ready for maiden flights by the end of 2017 capable of sending humans to deep space destinations such as an asteroid and eventually Mars, but not the ISS.

Second, the ISS orbit is losing altitude. The ISS orbits Earth and encounters friction with the upper atmosphere, causing the ISS to constantly lose altitude by about 50 to 100 meters each day. This graph shows its altitude since April 2013 (Credit: Chris Peate, Heavens Above). 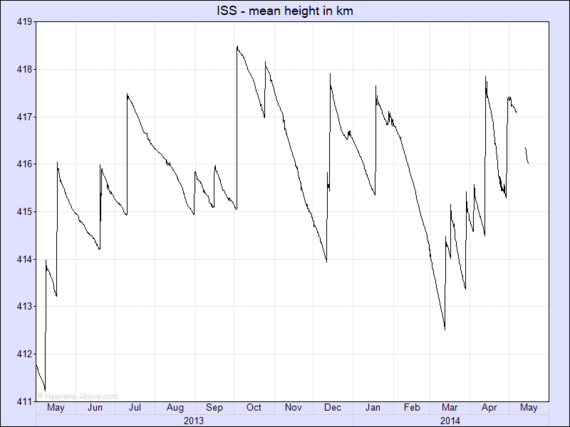 A combination of re-boosts by visiting Space Shuttles, ATVs and the Russian Progress vehicles have helped to maintain the orbit against atmospheric decay. The last Space Shuttle visit was in 2011, so the re-boost capability fell to the Russian Progress and the European ATV vehicles. In 2011, ATV-2 boosted the ISS orbit from 217 to 250 miles. In 2012, ATV-3 raised the orbit to from 245 to 260 miles. In 2013, ATV-4 boosted its orbit to 259 miles. Currently there are no more European ATVs being built after ATV-5 to be launched July 25, 2014, and only the Russian vehicles will provide this service afterwards.

The difficulty of predicting altitudes in the future is that solar activity increases the density of the atmosphere at the ISS orbit and produces increased orbit drag. Between 2020 and 2024 we will be approaching the next sunspot maximum (ca 2024) and drag will increase. The last time we were in this sunspot cycle situation was between 1999-2000 when the altitude decreased from 250 to 200 miles in just one year. At that time we had the Space Shuttle to help gradually re-boost the orbit back to 250 miles by 2003. That will not be the case after 2020. It is likely that without any Russian assistance, the ISS altitude will fall well below 200 miles by 2024. At these low altitudes, air friction grows enormously and the altitude loss rate will dramatically increase to one mile per week or even higher. At some point after it reaches 200 miles, ISS will have to be abandoned for safety reasons.

Without the Russian Progress vehicles after 2020, ISS re-entry and burn up will be inevitable, and may not be controllable to the degree NASA, and Congress, had originally hoped. Currently, the 2013 NASA plan involved two Progress vehicles providing the fuel for a controlled re-entry. A new plan could force the de-orbit to occur soon after 2020. This means the future of ISS would revert to the ca 2020 disposal plan in place before 2010. In fact in 2009, the plan was to de-orbit the station by 2016!.

So, the Russian abandonment of ISS (for now) will not drastically change the future of the ISS after 2020, which has always been uncertain. Only now the end of ISS will revert to a political decision not an engineering or scientific one. At that point, there will be no place for astronauts to go except perhaps the Chinese Tiangong Space Station due for launch in 2020.

It seems that, without ISS, American manned space travel beyond 2020 will have to go "all-in" on the politically controversial destinations of the Moon, an asteroid or Mars to keep itself relevant!