Heart beats are meant for hearts, not brains. Yet, for the past few days, that is all I have felt it in my forehead: throbbing headaches that are due to my lack of sleep. I blame it on this creative high that I have had recently, much of which has turned into a repetitive rat race between my mind and how quickly I can write down its ideas. I have been at the mercy of my writer's muse and my ambitious heart -- writing pieces, pitching some of them, creating resources for my readers, intensely brainstorming, filling out applications, watching DIY tutorials -- all in the name of living a life that is reflective of what I am most passionate about. Many people would call this 'hustling.' And as I dig deeper into what this is, what appears to be a hunger for success quickly turns into a dark reality in which we figuratively starve ourselves. But before we get into that, we need to explore the origin of "the hustle."

The History of the Hustle
The concept was birthed in one of the pivotal elements of the post-Civil Rights era, that being the creation of hip hop music in the 70s. The theme of needing to survive was not only part of hip hop lyrics; it was the overarching reality of those who pioneered this creative means of storytelling.

[Hip Hop] artists developed a sense of entrepreneurship because they had to. Hardly anyone wanted to do business with hip hop. The first rap records were released into the most hostile environment for black music since the 1950s. In the midst of the early 1980s backlash against disco, big music companies viewed rap as an even less palatable offshoot. And so for half a decade independent operators built a scene on their own -- until Rick Rubin and Russell Simmons signed a distribution deal for their indie label Def Jam with CBS Records in 1985, when the major could no longer ignore the beats in the streets.
-Dan Charnas, A History of Hustling Gives Hip Hop Its Entrepreneurial Edge

In other words, the driving force behind the early days of hip hop was survival. Not only was there the desire to tell authentic stories about the black experience, but there was a desire to make a living from it. They knew the worth in their poetry, the worth in their ability to interweave their narratives with the rhythms rooted in Jamaica and Africa.

The Hustle Today
Fast forward to the early to mid-2010s and "the hustle" has become a part of millennial culture. Unlike any other generation before them, many millennials desire meaningful careers that are part of a larger purpose. We are the giving generation, the ones who value authenticity in all facets of our lives, including our jobs. We want our livelihoods to be consistent with the things we are most passionate about. For many of us, this includes loosing ourselves from the prison of the corporate world and becoming our own bosses instead. And in order to keep our goals in focus and our drive locked in full gear, we recite mantras like the following: 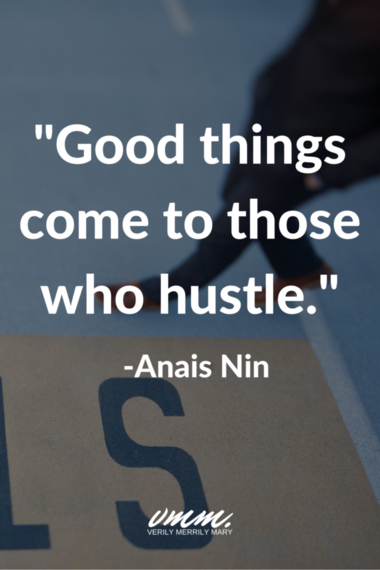 Hardly anyone would have issues with that quote. You put in work, you reap your reward--end of story. But despite the motivation this simple quote brings, there is a dismal side of the hustle that rarely discussed.

One of America's worst crimes, according to cultural historian and social critic Morris Berman, is the cultivation of a "culture of hustling." Hustling--the surrender of everything to market forces and the sacrifice of life to consumer culture--is an energizing and often enriching enterprise, but it is ultimately empty, depressing, and destructive.
-David Masciotra, How America's Culture of Hustling is Dark and Empty

Very few of us would equate the hustle with emptiness, depression, and destruction. Perhaps, our performance of profound ambition has us blinded. Maybe, in pursuit of being our most authentic selves in our livelihoods, something went wrong. And perhaps, we need to be reminded of the heart of the matter. 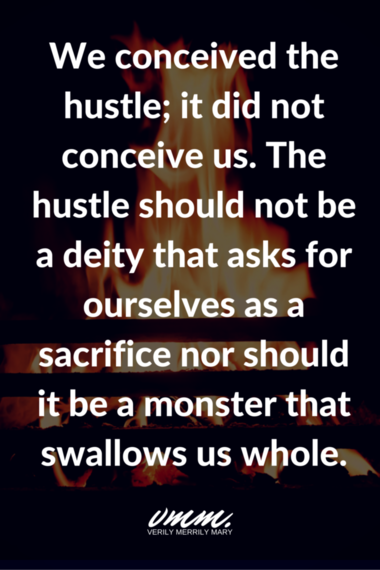 The Missing Component That is Essential to the Hustle Conversation
In the pursuit of being trailblazers, the flames consumed us instead. Frequent burnouts become our reality and conversations surrounding this condition are drowned out by firm but encouraging calls for us to work hard. Topics of wellness and self-care are rarely brought up alongside the hustle talk. They are often brought up in different conversations entirely, sometimes after the fact. One could argue that it is an issue of pride, confirming society's need to equate mental health care with weakness. After all, American society continues to successfully stigmatize it. It is the same society that fails to give men paternity leave and gives women a short maternity leave, showing that rest and proper bonding with a new human in a family unit is not near as important as the parents' careers.

Where to Grow From Here
Our jobs, even the fulfilling ones, are not our everything. Fervently pursuing our calling while neglecting to check-in with ourselves will eventually have us completely spent. Given this realization and the recent events in my life, I want to do a better job of prioritizing my rest and wellness. I cannot do or give my best if I am running on empty. After all, we set up ourselves for failure when we don't attach our self-care to our hustle.

What are your thoughts on hustle culture? Is self-care implied in the hustle or does the hustle only focus on one's drive to success, completely neglecting their wellness? Let me know in the comments section below.