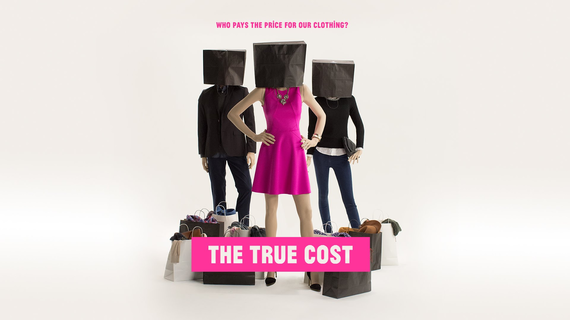 Andrew Morgan's new film, "True Cost," shows us the devastating environmental impact of the cute, cheap, dresses and shirts we buy and then get rid of to buy some more. While the price we pay for clothing has sharply decreased, the human and environmental costs have grown dramatically. One reason is the difference in how many articles of clothing the average American owns and how long we keep them. There has been a 500 percent increase in clothing consumption in the past two decades. But the U.S. has gone from producing more than 90 percent of our clothing in the 1960s to three percent today. The clothes we buy are produced in factories that do not meet US standards for protecting workers or the environment. What we pay for fashion is only a small fraction of what it really costs. The film says that fashion is second only to the oil industry in its devastating environmental impact.

Morgan talked to me about tracking down the true cost of fashion and how choosing what we wear can be world-changing.

How have your clothing choices been affected by what you learned in making this documentary?

Hugely. Two years ago, before I started this project, I never thought twice about anything that I bought. Experiencing what I experienced making the film, very practically speaking I made a choice to start buying second hand just while I figured out what I wanted to support with my purchases. And that process alone has been fun and challenging and yes, changed the way I shop. Also we have four kids at home, so it changed the way we talk about clothing in a really big way. And now that I'm coming out of that experience I'm excited to support some of the brands that we have got to know in the film and make purchases that are really meaningful.

The movie really takes a comprehensive view of every element of the fashion industry, from manufacturing to marketing and to the massive impact of just getting rid of all the discarded clothes.

I think this business model and this industry has been predicated on the assumption that you and I will not care and that we will not ask too many questions. And I think it's sort of remained hidden as an industry say from a lot of these other thing that we talk a lot about. We focus a lot on oil and energy and some of those things and yet fashion ranks right up there with them in terms of the resources it is using which is huge, and the waste that it's generated which is astronomical. And that's really the heart of the film. I wanted to connect a lot of dots. I wanted to take a lot of things that seem disconnected and actually reveal how connected they all are.

How have corporations been able to prevent any meaningful oversight from governments or consumers?

Let's start with the fact that companies have made a concerted effort to communicate to the rest of the world that is a problem that they can solve. And I think a lot of CSR [corporate social responsibility] energy beyond "green washing" and marketing is really a very intentional effort to prevent government or outsiders from getting involved. Beginning with what we saw from Nike in the 90s and on, they realized there was a problem and they worked really hard to communicate to everyone else involved, "Hey we can fix this ourselves and we don't need real traceability and accountability." That's proven false.

I think one of the striking things about the collapse of the Rana Plaza factory in Bangladesh a couple of years ago now, was that it had just passed with flying colors some of the major audits just days before. The second part of this is we've created an economic model in our world where we only are assessing bottom-line profits. And in a model that only assesses and only incentivizes narrowly defined bottom-line profits. These companies actually have a responsibility to shareholders to do everything in their power to increase this quarter's profit. And that comes at the expense of a lot of these other things, so how do we improve it? I think we start to look more carefully at what as it says in the film, what the true cost is. When you look at the environmental costs, natural resources and waste, are totally externalized from the equation. They are not even been calculated. When you look at human labor that can be pressed and pressed as the one point in the supply chain that can get cheaper, you very quickly just to start to realize, "Hey this is an outdated model and we just need to adjust and evolve to a more humane place moving forward."

We've created a world that is increasingly being led by the interests of multinational corporations and that is proving to be incredibly problematic. You look at an industrial disaster on this scale and then two years later the changes that have been made are marginal and at best they're treating some of the symptoms, and not even that very effectively by the way. We have a worker compensation fund that hasn't even been filled which is just a tragedy. The model itself has to adjust and I think that's what I'm focused on. The model has to evolve if we are going to see the people involved to be anything more than exploited.

I loved the skit from Saturday Night Live about the disposability of suits from Jos. A. Banks that you used in the film.

Our sound mixer on the film, a dear friend of mine, actually showed that to me when we were in production and I couldn't believe it, I had never seen it before and it made me laugh but also in a really painful way. I think one of the things that we really found and include in the film in terms of popular media references is this idea that a lot of us have this growing suspicion that there are some things taking place that are not so good when it comes to clothing. Even as we're sharing the film with people I don't think this is a revolutionary thought that there is careless environmental behaviour or human exploitation involved in these supply chains and to know something that we are even laughing about like that's a very interesting statement, I think.

Did you try to get representatives from the fashion industry to talk to you for this film?

Yes and honestly some of them we got quite far in the dialogue. H&M was one of them. I offered them a lot of ways for them to be very safe and we went to great lengths but they all said no, we want no part of this.

What would you have asked them?

They are spending millions and millions of dollars every year trying to communicate that they are a company that really cares and I think a lot of people that work there do but I would ask them to explain to me how their model is doing anything other than leading us in the opposite direction that we need to go. And how we are going to square away a growing population and limited resources with a model that is treating people and clothing as disposable things. That to me at the end of the day and that's the model adjustment that we have to see changed.

What do you want people to do differently when they think about purchasing clothes?

I'm not trying to communicate to people, "Hey, here's another problem that you need to think about." We're all busy, we have so much going on in our lives and nobody wake up this morning thinking, "I need something else going wrong in the world to take on and care about." But what I want to communicate to people and specifically younger people is just to say: Hey, there is actually like a way for you to be a part of creating the kind of world you want, living with choices as simple and small as clothing.

There is a lot people who are beginning to care deeply about some of the major issues facing the world today, global inequality and in poverty and the environment. But I think a lot of times we feel very helpless. When we start to bring those big issues down to choices as simple as clothing and just begin to realize that even if I can't change this whole industry today, I could start to be more conscious, I could start to be more aware, more kind, I could start to make better choices, I could leverage some of my influence as a customer. That's a moment that stuff could really begin to change.

And I will say that when we make a film like this the purpose is I want to crack this wide open because I want to get the attention of the world, I want to get people leveraging their purchasing power and also just the power of awareness to begin to see the need to move because business can make changes to move forward but they typically only made that when customers demand they do.

I hope that does for other people and what it has done for me the last two years. It actually added meaning to my life, it connected me more to the kind of world that I want to live in.