The world wastes an astonishing amount of food. As a recent Chicago Council on Global Affairs' blog post outlines in stark detail, about one third of all the food that is produced is wasted, which amounts to about $1 trillion worth of food loss each year. A shocking 7 percent of global greenhouse gas emissions come from food that is thrown away, and the water that goes into producing food that is eventually wasted could fill Switzerland's Lake Geneva two times over. More nutritious foods are wasted more often: Fruits, vegetables, and fish are wasted in much greater quantities than grain because they are more difficult to transport and require refrigeration. This makes it all that much harder to make nutritious foods available. Given food waste's economic costs and the fact that nearly a billion people around the globe don't have enough to eat, it's time reducing food waste become a major priority. 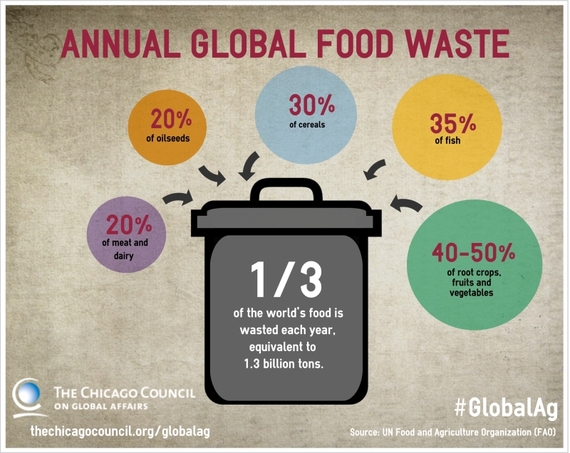 The U.S. and Europe are responsible for about 60 percent of the world's food loss. People in these countries prefer fruits and vegetables that are cosmetically appealing, which means that produce that is imperfect-looking yet still perfectly nutritious is discarded. Suppliers, restaurants, and consumers also purchase more than what they eat and often incorrectly store food that needs refrigeration, meaning that as much as half of what people buy at the grocery store or restaurants can end up in the trash can. It's a true embarrassment of riches -- we waste food because we can.

In poorer countries, food is wasted not because people buy too much but because infrastructure is too poor. In many cases, farmers do not have containers to store the food they harvest, and most people do not have refrigerators to keep fish, milk, or produce chilled. In sub-Saharan Africa, more than 40 percent of all fruits and vegetables spoil before they even reach the market. With that level of waste, it's no surprise that one in every four Africans is chronically malnourished.

As a congressman and as Secretary of Agriculture I focused on ways to encourage gleaning and food recovery efforts, but tackling this problem anew can produce big gains for nutrition, the environment, and economics. In countries like the U.S. and Europe, a lot of food waste can be prevented by providing more accurate information on when food will spoil. Right now, expiration dates on food are inconsistent and often exaggerated. We can also make a big dent in food waste by investing in how produce, fish, meats, and dairy products are collected and stored, and incentivizing consumers to be more aware of the importance of only purchasing what they will eat. Grocery stores in France and the UK are also selling "ugly" fruits and vegetables, or those with cosmetic imperfections, which is fostering a new market for produce that would have otherwise been wasted.

Developing countries need places to store their food and refrigeration equipment in which to transport and sell it. Even expanding basic processing capabilities, a cause nonprofit groups like Partners in Food Solutions are spearheading, will go a long way toward lengthening the shelf life of foods. Many companies that are starting to source foods in Africa and Asia, such as Coca-Cola and Unilever, are making these important investments.

Reducing food waste will pay off. A new report by the UK Waste & Resources Action Programme (WRAP) projects that reducing food waste by 20 to 50 percent per year by 2030 could save $120 billion to $300 billion annually and reduce greenhouse gas emissions by 200 million to 1 billion tons, which is more than the annual emissions of Germany. Perhaps more importantly, it will make it much more likely that we will be able to produce enough nutritious food for everyone on the planet. That fact in and of itself should give us a reason to clean our plates.