If Massachusetts is any indicator, the increased demand for services will lock up general medicine in many states.

Eventually, when it works, the Affordable Care Act will increase enrollment by the millions. Visitors to Healthcare.gov nearly topped 10 million in the first week alone, and demand is still quite high.

What has not been so openly discussed is the actual impact of increased enrollment. What does it mean for hospitals, providers, and practices to absorb the additional 47 million uninsured Americans?

To examine the potential impact, the data from Massachusetts provides insights on what happens when more individuals used Medical Care. Admittedly, a small New England state with a tech economy and above average spending on healthcare is not representative of the entire Union. Examining the results may prove insightful, however, if the correlations hold.

From 2006 to 2010, the percentage of uninsured individuals in Massachusetts dropped from 6 percent to 2 percent according to the Department of Healthcare Finance and Policy. During the same time period, wait times for Internal Medicine Specialists jumped from 47 days to 53 days (increase of 13 percent). Simultaneously, the percentage of offices accepting new patients dropped from 66 percent to 51 percent.

If the correlations seen in Massachusetts hold in a state like New York, we can approximate the anticipated strain on the system. The analysis assumes that the delays in wait times etc. were a direct result in the increase of the additional number of patients caused by more universal coverage. The relationship may not hold completely, but if it's a bellweather, New York should be anticipating a major surge in wait times, and a drop in availability. 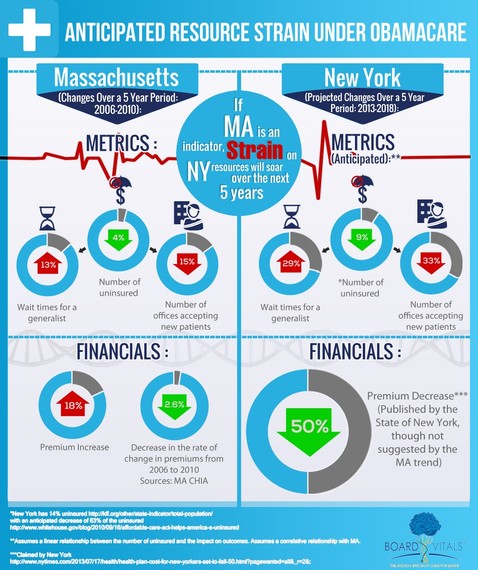 The last option may be the fastest fix. The number of graduating Nurse Practitioners has been fixed at 8,000 for the past several years, but that number could be increased over a three year period. In order to handle the impact of the ACA, new programs need to emerge that focus specifically on the primary care functions that will be in high demand.

In either case, the state of New York will need to rapidly adapt to the changes, and find more efficient or alternative means of providing general primary care. Many other states will likely need to do the same as access to care is reduced. Rethinking the educational system may alleviate the inevitable strain that many states will now face.

CEO in the Healthcare Education Industry