It's an age-old saying that behind every great man is a great woman. In the last few years, a number of fantastic novels have told the fictionalized stories of the wives, mothers, sisters, and girlfriends of the men who've shaped our history, and how the ladies have done just as much to contribute. These books are wonderful to read, but every once in a while, you might go looking for the real thing. Enter Lily Koppel's The Astronaut Wives Club, the true story of the spouses of America's Mercury Seven, a group of astronauts selected by NASA in 1959 to head a number of new space missions. When their names were announced, the women--Rene Carpenter, Trudy Cooper, Annie Glenn, Betty Grissom, Jo Schirra, Louise Shepard, and Marge Slayton--went from being everyday military spouses to certified American royalty, appearing on the cover of LIFE magazine and having tea with Jackie Kennedy. 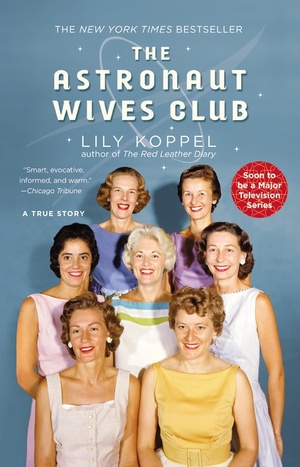 The first thing that's great about The Astronaut Wives Club is that it's not just about the names you know (Armstrong, Aldrin, Lovell). In fact, those famous faces don't come into play until the latter half of the book, when their wives join the club as part of "The New Nine"--the wives of astronauts in the Gemini program, which launched in 1962--and "The Fourteen" and "The Nineteen," which crewed the Gemini and Apollo missions from 1963 onward. The book's focus rests squarely on "The Seven," the original wives, who had little to no experience with space and laid much of the groundwork for those who followed.

Each of the women, from bombshell Rene (JFK made it clear that he liked her best) to the "Ultimate Astrowife" Annie Glenn, had their own distinct personality and outlook on life as an astronaut wife. With no one to tell them how to act, many just guessed. For example, when Marge Slayton, horrified that her husband Deke had been bumped from a mission because of a heart murmur, uses her kitchen's rotary phone to call an operator and demands to speak to President Kennedy, certain he'll make time to speak to her.

Pride, rivalry, hierarchy, technical malfunctions, fear, patriotism, support, infidelity, and jealousy are just a few of the minefields the wives had to navigate as they faced down the final frontier, and Koppel is not afraid to explore the human moments behind these larger-than-life milestones. Even though this is history and you know how things end, you are terrified at every blastoff, relieved at every landing, and proud at every photo op. The '50s and '60s come to life with the detail and knowledge that Koppel presents. Want an even cooler experience as you read? Check out the Astronaut Wives music playlist that she made. I'm especially excited to watch the television adaptation that premiered last month on ABC, which is bringing this vivid portrait of modern Americana to another level of Technicolor.

What I found--and still find--to be the most amazing part of reading The Astronaut Wives Club was hearing from my mother how firmly these women's faces and names were imprinted on her childhood, yet they'd never even come up in my own. (Any of them could have been my grandmother, still alive today.) As I was learning about the first men to step onto the moon and travel through space, I had never once thought about the people who stayed behind while they made these historic journeys. Compulsively readable and eye-opening, the book serves as a welcome and happy reminder that sometimes the best stories are the ones behind the headlines.