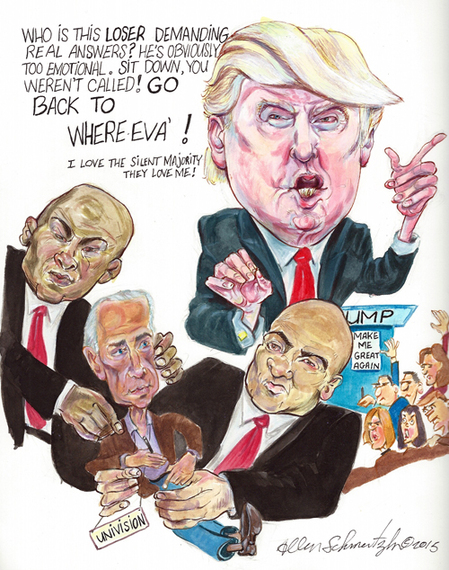 This is getting really interesting, "bing, bing, bong." Pay attention folks. Labor Day has come and gone and the real push for a new president begins. Hillary is on an apology email tour as she is tanking, Joe is jogging, for the last time, Jeb inaugurates Colbert, and Trump proves he is no chump as he "bing, bing, bong" trash talks the minority on the stump to reincarnate Nixon's Silent Majority.

This is exactly what America needs, The Donald trumping "bing, bing, bong" on the stump, his new rallying song to impassion Nixon's secret reactionary social militia to come out from the political shadow to help him make America great again.

Remember those celluloid heroes that stood up to a changing America, the ones that represented the sentiments of Nixon's silent majority, the Hollywood caricatures of that hardhat working class cursing, racist, misogynist "Joe," played by Peter Boyle, or the living room sexist and racist, "Archie Bunker," or the white redneck professional original drive-by hit men types from "Easy Rider?" Now, they are in the flesh at Donald Trump rallies. Finally, real, original Americans have their blue-eyed, blonde ( or whatever ) haired warrior, to lift us to the Promised Land.

Trump has coyly "loonied" them back from their Hollywood Boulevard star-grave to take America back. If we include the Moral Majority and then Phyllis Schlafly for his Vice President, I know the Chinese, Russians, Iranians and Mexicans will run scared. And, with Trump, Bible in-hand, but none of the content in-head, bullies to keep soaring in the polls promising lots of "bing, bing, bong" and maintains his front-runner status, our enemies will know we have become great again by unleashing our most deadly weapon, "Dr. Strangelove, the one who flew over the civilized nest," the one who will verbally beat up anyone, the one who knows how to close the deal, and they will know there are no stupid people left in Washington. Trump will loom larger than the combined spirits engraved at Mount Rushmore.

Donald Trump, the really smart guy figured out, it's about attitude, it's about we are so sick and tired of platforms, ideological diatribes, soaring rhetoric, mind-numbing position stump speeches recycled and polled to target the hand-crafted organic, natural ingredients of a political party base. He knows we are madder and crazier than hell and will not take it any more. He knows we want a president with authenticity, who is raw and un-melting pot racist, misogynist, that hits a bellow the belt sucker knee jam into the delicate privates of the establishment, and who will viciously tongue-fu back against press elites who hide behind the skirt of the first amendment.

Trump knows we just want to be great again, and playing nice and civil and making apologies makes us look weak. We want a great man who repetitively says he is great to lead us to the great land that is free from illegal immigrants.

So, he stumps and insults. He stumps and thumps. He stumps and dumps with his eloquent low information "bing, bing, bong" until he, Donald Trump the chump, falls not too far from his stump, with his 30% of the 15% and claims because of him, because he made us talk about problems, made America great again.