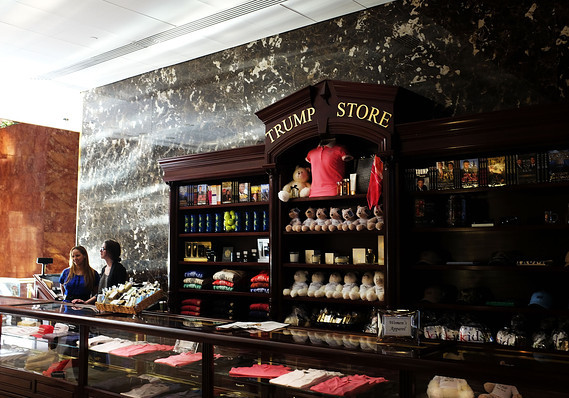 Donald Trump not only tells lies, he sends his minions out to do so as well. Corey Lewandowski recently stated that the store in Trump Tower generates 500 million dollars per year in sales. Yes, half a billion dollars!

Until recently, this "store" was a merely a counter in the Trump Tower lobby offering cufflinks, polo shirts, whiskey flasks, dice, handbags and other Trump items, so the half a billion dollars in sales seems wildly inflated. However, that counter was placed there illegally by Trump and was ordered removed, because Trump was given a zoning bonus by the city in exchange for building public spaces in a privately owned building.

The Trump store has been moved to the lower level of Trump Tower and is nothing more than a souvenir stand than anything else, and while it has a website, it does not actually sell its wares on the internet, making Lewandowski's claim of half a billion dollars utterly ludicrous.

To offer a comparison, Stew Leonard's is a grocery store chain comprised of four stores that have been called the best the world. They employ 2,226 people and gross sales last year were approximately 341 million dollars.

I don't know how many people are employed at the Trump Store on Fifth Avenue, but when I arrived on Saturday afternoon for my visit, it was closed. When Trump gets caught in a lie he makes no attempt to apologize but will instead bad mouth an opponent, claiming they also lie.

Forget about Trump being President of the United States of America. I wouldn't want him to run a souvenir stand. He's already botched that job on Fifth Avenue.