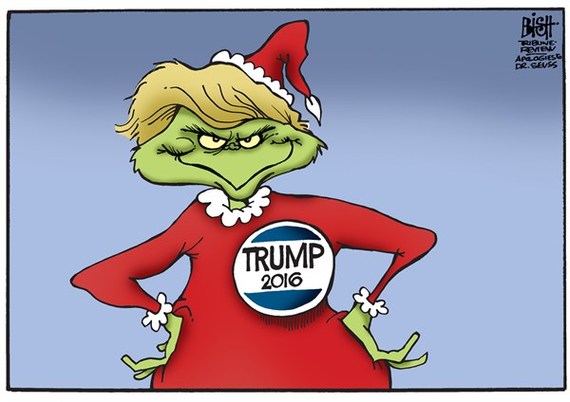 Many of us have been shaken to their cores that Trump has won these elections. The fact he has not won the popular vote does nothing to soften the blow. Many have been loosing sleep after the upset as it dawned on them their worst nightmare has indeed materialized.

Many took to the street in peaceful protests to feel like they were not just lying down with no resistance, as the candidate who ran on a bigoted and intolerant platform, more than any in recent memory, became the representative of all Americans.

Muslims and their kids live in fear they will be targeted, and prevented to leave or re-enter the country.

Latinos are worried their parents or family members will be rounded up, placed on a truck and deported or placed in internment camps indefinitely if no country agreed to cooperate on the mass deportation scheme.

Gay people fear that new conservative justices of the Supreme Court will reverse their marriage equality rights and annul their legal status.

African Americans are fearing the worst when Trump makes good on his promise to institute Stop and Frisk policies across the country, in an environment where already many innocent people are being shot during random police stops.

Jews are mortified that the blatantly Anti-Semitic rhetoric the Trump campaign has used in order to appeal to White Supremacy groups will draw racists out of the woodwork and bring on an unprecedented wave of hate crimes.

It is true that since both the House of Representatives and the Senate are now in Republican hands, there is little in the way of stopping Trump from implementing many of the things on his agenda. And yes, it will be nearly impossible to fight the Trump administration and Congress on every single issue. While we pick which issues to fight some will inevitable slip by with little to no resistance.

However it is important to recognize a few things that will provide a silver lining and soften the blow.

1. ALL RESPONSIBILITY NOW RESTS ON THE REPUBLICAN PARTY
At this point all power is now held by the Republican party. Both Senate and House of Representatives, and in fact all three branches of government (Executive, Legislative, and Judiciary). This means one thing to anyone who can rub more than 2 brain cells together. Any thing that get's messed up falls clearly on the shoulders of Republicans. There will simply be no one else to blame. I am sure they will try, but I can not imagine that the American people at large would not see through that. This by itself should have the effect of restraining Republicans and this administration from instituting radical policies that could boomerang, and come to haunt them for many elections to come.

2. VOTERS WILL EXPECT TRUMP TO DELIVER ON HIS PROMISES
Trump in his campaign promised many things that sounded good to his followers, but that are either unconstitutional, like Muslim ban of entry based on religion, or simply very hard to accomplish, like deporting millions of illegal aliens and their children.

Already, even before anything started, Trump has demonstrated nepotism and conflict of interest by appointing 3 of his close family members to lead the Transition Team, which will wield its power by selecting who is going to constitute the administration. Further he has already contradicted his rhetoric on lobbyists, by including some of the most powerful ones in the transition team.

Supporters who elected him on basis of his campaign rhetoric may soon turn on their candidate as he disappoints their expectations. This ties in with the first point, he will not be able to blame failure on the opposition.

3. ESTABLISHMENT REPUBLICANS WILL NOT AGREE WITH TRUMP ON ALL MATTERS
We know already that there is day light between some of the establishment parts of the party and Trumps agenda and views, as there already is division between the Tea Party, which everybody has forgotten about, and the other two.

So the question arises what will happen after Trump and Congress exhaust the list of overlapping issues. It is doubtful Congress will capitulate to Trump to avoid conflict. It is more likely that a chasm will open up between the 3 sectors of the party, which is likely to interfere with their ability to conduct business efficiently.

4. POLITICAL CAPITAL WILL BE STRETCHED VERY THIN
Though all reigns of power are in the hands of the Republican party, each issue that is invoking a genuine and deep division in the citizenry spends limited political capital. The administration and Congress will find themselves in the same political quagmire Democrats were in while trying to pass comprehensive health care in the first Obama administration.

As mentioned, the more issues and policies are introduced, the more difficult it will be for an opposition with limited resources and supporters to battle, but it is ultimately a double edged sword. Depending how fierce the opposition is, it may waste a lot of cycles for this government to battle. They will realize that if they attempt to pass outrageously egregious policies and laws, many people will go out of their way to protest, and pressure politicians on a local, State and National level, and cause a lot of resistance to gum-up the wheel of power.

So, while there is much cause for concern, and no space for complacency right now, one has to look at the larger picture and not fall into despair.

Personally I will be putting a lot of effort towards reform of the Democratic party, so it is once again representative of the Blue Collar worker and the ordinary folk, by flushing out fiscal conservatives out and replacing them with progressive politicians. This will be necessary to reassert the relevance of the Democratic party in the next elections and beyond.

Sadly I will also have to raise my political activism and put it on Turbo-Mode for the foreseeable future to help shape the resistance to Trump's agenda. I urge you too to do so!