The first questions in a public opinion poll about a conspiracy theory centered around the death of Hitler. Although the Soviets had quickly confirmed via dental records that the remains collected in Berlin in May 1945 were indeed Hitler's, Stalin told Truman at Potsdam that Hitler had not died. As a result of this disinformation, just 16% of Americans believed Hitler was dead in a September 1945 Gallup poll. The British government attempted to dispel this myth by requesting former British intelligence official Hugh Trevor-Roper to write a book documenting Hitler's suicide. The Last Days of Hitler was published in 1947, but 45% of American that year told Gallup they still believed Hitler was still alive.

The truth is out there.

No poll broached the subject when New Mexico residents first told tales of strange flying objects and falling bodies in the 1940s, but surveys since have found that the conspiracy theories about UFOS that began in that decade have proven long-lasting and resilient. In 1997, the Air Force issued a report meant to put such stories to rest, stating that those witnesses had actually seen weather balloons and crash-test dummies. This effort failed; only 25% of Americans believed the report. Three years later, 40% of the country said that the U.S. government was withholding information about the existence of UFOs; an additional 11% didn't know.

Man's excursions into space have proven less fertile ground for conspiracy theories. Although speculation that NASA faked the moon landing started from the moment that famous first step was taken, polls in 1995 and 1999 found just 6% of the country believed the event was staged. 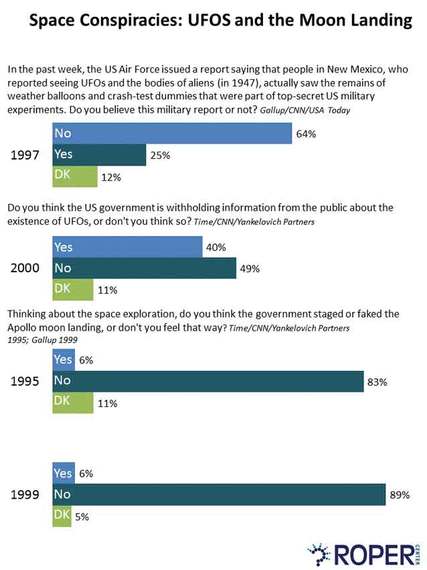 The Kennedy assassination resulted in the granddaddy of all American conspiracy theories, with suspicion about what really happened emerging soon after JFK's death and continuing to this day. In 1966, half the country believed there were others beyond Oswald involved in the shooting, a proportion that rose to 81% in 1976, then began to decline. After Oliver Stone's movie JFK came out in 1991, belief increased again. In the last few years, lower proportions have reported that they think others were involved, but still about six in ten Americans say Oswald did not act alone and there was an official cover-up. 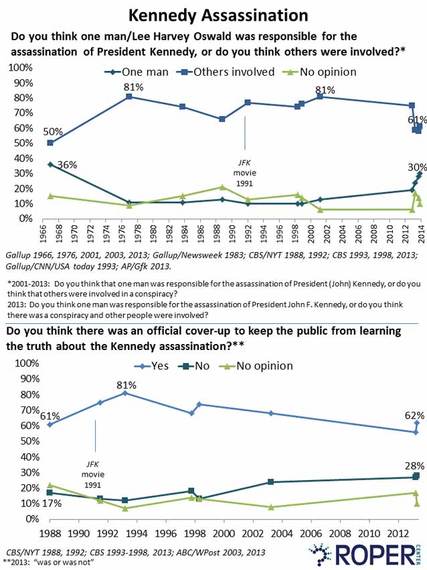 Though the official narrative of the assassination may have been viewed with skepticism in 1966, the specifics of the conspiracy theories do not seem to have solidified at that point. When asked who was behind the assassination, 29% said they weren't sure, and 14% wouldn't say. Communists were mentioned by 11%, and other possible collaborators and combinations by less than 10% of respondents. Castro was favored for involvement by nearly a third of the country in the 1970s, but in 2013, the CIA and the Mafia were under the highest levels of suspicion. 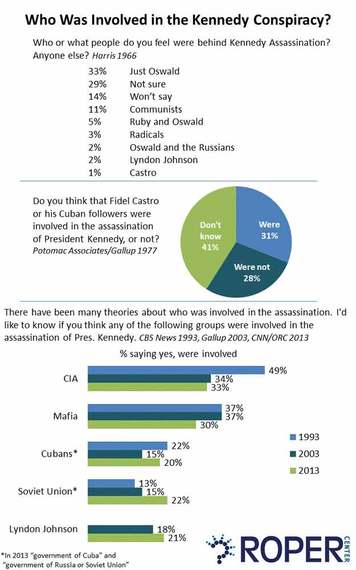 The assassination of President Kennedy was just the first in a series of murders of American leaders that left many wondering if so many tragedies could possibly have been the works of unrelated, lone individuals. A year after Martin Luther King, Jr. was killed in 1968, 82% in a Gallup poll of black Americans said they thought King's assassination was the result of a larger conspiracy. A 2008 poll found that 86% of blacks still believed so. Half of whites agreed. 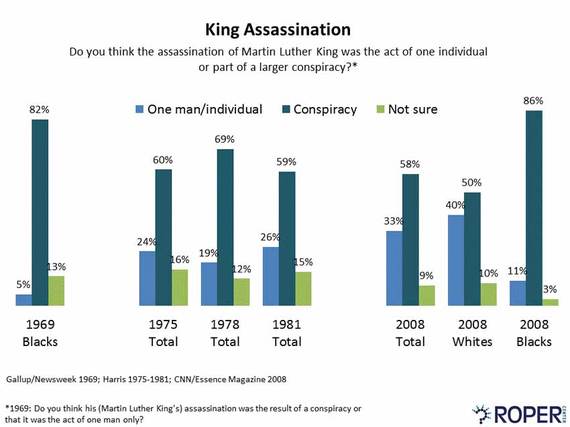 Of the three assassinations that shook the country in the 1960s, Robert Kennedy's murder was considered a conspiracy by the lowest proportion of the public by 1981. Still, nearly half the country believed that Sirhan Sirhan was part of a larger conspiracy. 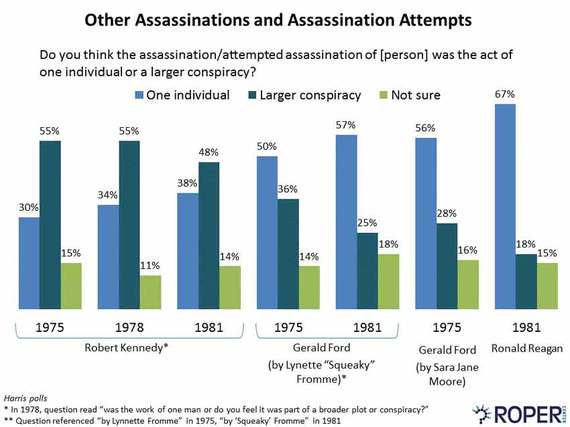 Elvis has definitely left the building.

Conspiracy theories about famous deaths have not been confined to political figures. Rumors emerged in the 1980s that Elvis Presley hadn't died in 1977, but had faked his death and gone into hiding. CBS News first asked about this in 1989 and found support only in the single digits, where it has remained for many years. In 2002, the last time CBS asked about Presley being alive, 88% of the country said it was not possible such rumors were true; just 7% thought it was possible.

Given the level of Princess Diana's fame and the suddenness of her death, the emergence of conspiracy theories was perhaps inevitable, though majorities rejected them. Six years after her death in 1997, a CBS poll found that 58% of Americans thought that the car crash that killed her was probably an accident, 26% thought it was probably planned, and 16% didn't know. In the same survey, 20% of the public thought the British Royal Family was involved, and 12% thought the British government was.

New conspiracy theories continue to emerge from major events, particularly those that trigger deep fears. The September 11th attacks spawned a number of conspiracy theories, the most well-known of which was that the George W. Bush administration knew about the attacks before they were planned. In a Fairleigh Dickinson University poll in 2012, a quarter of the country thought it was very or somewhat likely that President Bush knew. Just 56% said this was not at all or not very likely; 19% were unsure or didn't know.

Perhaps the most broadly believed current conspiracy theory is that Barack Obama faked his birth certificate to conceal his real country of birth. Two different questions asked in April of 2011 found that just under six in ten Americans were certain Obama was born in the U.S., but there was some differences based on question wording in how many of the remainder believed firmly that he was born abroad and how many weren't sure. 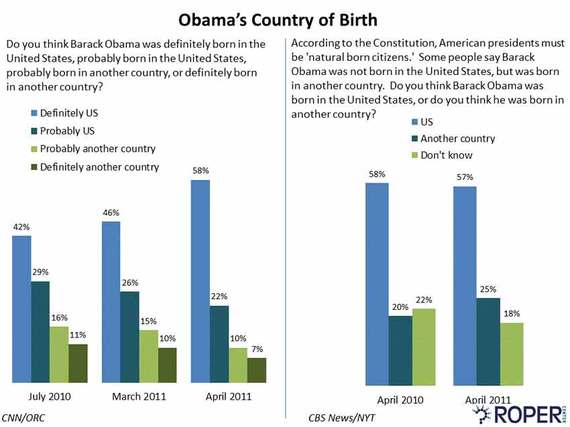 Only time will tell if current conspiracy theories will be nearly forgotten in the coming years, like the idea that Hitler escaped alive, or continue to capture the public's imagination for decades, like theories about the Kennedy assassination. But the polls of the future will disclose all -- if the pollsters themselves aren't in on the conspiracy, of course.