Picture in your mind a farm chicken -- the kind bred to be eaten. Can you see it? Maybe the image comes from a movie or a children's book, or from Old MacDonald's idyllic and fictional ranch. But if you think that image is similar to the actual chickens bred and raised for production and eventual distribution to your supermarket, think again. 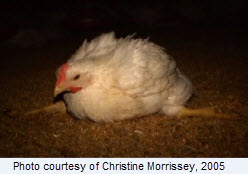 The sad truth about today's chickens -- nearly 9 billion of which are slaughtered annually in America -- not only confirms our worst fears, but raises all-new concerns about their welfare... and our health. And in case you're wondering, the FDA and USDA are way off the case.

Here are eight truths you should know if you care about what's on America's plate:

Because we're dedicated to stopping animal cruelty and abuse, and care about your health, the ASPCA is calling on the chicken industry to do better -- but we need your help getting their attention.

We need to show the industry that even people who buy their product and rely on them to do the right thing care about how chickens are raised. That's why I'm proud to share news of our new campaign: The Truth About Chicken. At this time, the ASPCA is the only large-scale U.S. animal protection group working specifically to improve the lives of chickens raised for meat.

Stay updated, sign our petition, keep track of the campaign's progress, and take action by visiting TruthAboutChicken.org and spreading these Eight Truths to friends, family, and colleagues. Talk about the issue of chicken breeding and welfare with managers at your local supermarket. Tell them how important it is to you that chickens are both bred and raised without cruelty.

Regardless of what you consume, it's time for us all to 'think again' about chicken. Because if we don't, clearly no one else will.