This morning I heard an expert from a respected economic think tank talk about China on a nationwide radio show. He started off his comments by saying that China's currency had devalued by three percent against the U.S. dollar, which was a "dramatic drop." He then went on to say that it was probably an attempt to correct the "market collapse" that China had experienced the week before. He said that China's economy was slowing much faster than the government anticipated. Finally, he conceded that by some measures the Chinese economy was almost as large as the U.S. economy.

Every comment above is misleading, untrue or an outright lie. Below are six facts on China and the U.S. that are very under-reported in the Mainstream Media, where misleading information and data are rampant. Getting the facts right will help you to navigate your investments and safeguard your assets in the years to come. No matter how inaccurate the comments are, the numbers don't lie.

China vs. the U.S. Facts

And here are the facts.

China vs. the U.S. Facts

2. Chinese Yuan vs. the U.S. Dollar.
As you can see clearly in the attached chart, the overall trend of the Chinese yuan against the U.S. dollar is one of great strength. While the euro and the yen have weakened against the dollar over the past decade, the yuan has increased in value by a significant margin. In 2005, it took over eight yuan to exchange for one dollar. Today, it takes only 6.40 yuan to purchase a dollar. The "devaluing" that occurred last week is a gross misrepresentation of the relationship of the yuan to the dollar. The yuan dipped about three percent, after years of soaring strength against American currency. 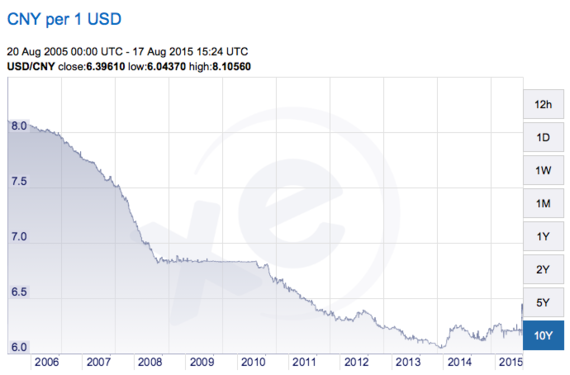 3. The Chinese vs. the U.S. Stock Market.
The Chinese stock market did have a drop of 32 percent over the past few months. That is definitely a correction. However, it is not a collapse, particularly when you measure it against the two most recent collapses in the U.S. markets (see below). As of today, the Shanghai Stock Exchange has already recovered a lot of ground, trading at 3,994, vs. the high of 5,166, set on June 12, 2015.

A collapse is what occurred in the U.S. stock market during the Great Recession, when the Dow Jones Industrial Average dropped 55 percent. Yes, the stock market is back to all time highs, however, it took five years to come back to the October 2007 highs. 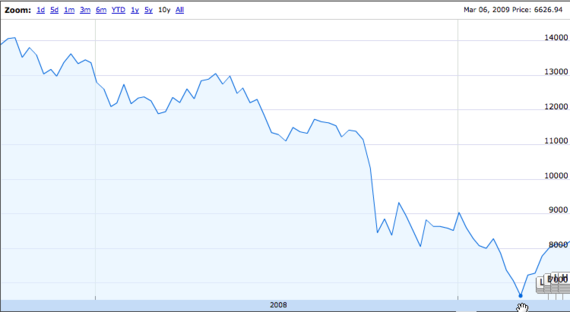 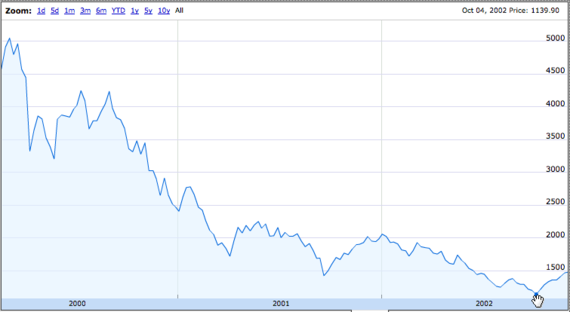 4. Chinese Currency as a Global Reserve Currency.
As I indicated in my article on Global Reserve Currencies back in February of 2014, the U.S. dollar is no longer the global reserve currency. The International Monetary Fund has included "unallocated currencies" in its reporting, which has become the largest global reserve holding. The IMF is not providing details on just what unallocated reserves are. (Trust me, I've probed.) However, the most likely conclusion is that the unallocated reserves are largely made up of the Chinese yuan, particularly when you see that the massive growth began in 2001.

It is no secret that the Chinese want the yuan to become an official global reserve currency and are pushing for the IMF to acknowledge the yuan officially. The Chinese move to allow the free markets to determine the value of the yuan is a move to gain IMF acceptance of the currency - not a move to specifically devalue it. Some pundits say IMF approval could come as soon as November, while others, including Dr. Lawrence Yun, the chief economist of the National Association of Realtors, believe it will take up to ten years for this to occur.

My two-cent analysis is that November 2015 is too soon. However, I would not be surprised if the announcement occurred sometime over the next 12-24 months. The currency is just too large of a presence on the global stage to ignore for much longer. The IMF can stall the process by demanding more gold in the Chinese reserves (which is happening) and a longer period of time of free-trading of the yuan (which just began).

6. Chinese vs. U.S. Debt to GDP Ratio.
Experts frequently talk about the Chinese government "propping up" its economy, intimating that China is unique in this regard. In the U.S., our debt is $18.152 trillion (source: TreasuryDirect.gov). The U.S. Debt Ceiling will have to be raised again this Fall in order for us to pay our bills. Otherwise, the government will shutdown and there will be a default on certain payments. Our GDP is currently $17.84 trillion (source: BEA.gov). In other words, our total debt exceeds our GDP. If you include the $12 trillion consumer debt (source: New York Federal Reserve Bank), the U.S. debt problem becomes alarming, at over $30 trillion. This astonishing number does not include corporate debt.

China has come into the news lately for its alarming increase in total debt. According to a study by McKinsey & Company, China's total debt is $28 trillion, up from $7 trillion in 2007. According to McKinsey, the total debt to GDP ratio is 233 percent in the United States and 217 percent in China (including government, corporate and household). Both are crazy high. However, at least China is growing at the fastest pace in the world, whereas the U.S. is using every trick in the book to boost the economy and is still only a hair's breadth above a recession.

The sooner we acknowledge that China is a larger, faster growing economy than the U.S., the sooner we can spark the competitive, entrepreneurial spirit that made our nation great in the first place.