Just like everyone in the Northeast has a favorite road rage swear word, so too does every man, woman, and child in the urban Northeast have a favorite diner, and I mean everyone: Steak-lovers, vegans, calorie-counters, good politicians, bad politicians, Average Joes, kids, seniors, people who put ketchup on their eggs, celebrities, crazy drivers, foodies, American Gladiators, the cholesterolly-challenged, people who eat tapioca pudding... everyone. 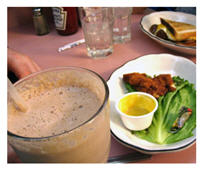 To be fair, you can find diners in many more places than the Northeast, but as a rule of thumb, if it has a tablecloth or a Happy Meal, it's not a diner. It's not clear what draws such diverse people to this particular kind of eatery, but in my 40 years of in-depth diner observation, I've noted similarities so striking that there must be some kind of secret society, complete with secret rules and an official secret handshake (so long as they wash hands before returning to work).

These rules and regulations -- let's call them the Officially Recognized Diner Eatery Regulations for Universal Patronage (or O.R.D.E.R. U.P.) -- would have to look something like this:

A diner must be able to make basic foods well, like club sandwiches, eggs, burgers, simple salads, mashed potatoes, tuna fish, and pancakes. But it also must offer every other conceivable dish under the sun, from moussaka to pastrami Reubens. It doesn't matter if 99 percent of traditionally-ordered items come from 1 percent of the menu; a diner must always be prepared for that one customer who doesn't realize he could get a better Penne a la Vodka almost anywhere else.

Menus
A diner menu, the U.N. of restaurant menus, must be no smaller than a car windshield cover, and laminated for guaranteed protection through the year 2050. Handwritten "specials" may be clipped to menu, but they must contain grammatical errors involving misused apostrophes: meatball's, dinner roll's, chicken finger's, etc.

The diner must also have a separate kids' menu, preferably doubling as a colorable placemat. This menu must be accompanied by the cheapest, most easily-broken and most unwashable crayons in the bad crayon industry. This food portion must offer spaghetti, grilled cheese sandwiches, hamburgers, and some sort of chicken formation which is 83 percent fried batter, 15 percent thoroughly-processed chicken and 2 percent something else entirely.

Wait Staff
Diner waitresses and waiters have to be courteous, but not overbearing, with a touch of attitude at no additional cost. They should also be qualified to steer you in the right direction. For example, a man sitting next to me at a certain New Jersey diner counter once told the waitress he wanted a slice of the grey-looking lemon meringue pie in the display case.

O.R.D.E.R.U.P. Rule of Thumb: When a diner waitress says you DON'T want something, trust her without hesitation.


Food Displays
The refrigerated display case usually behind the counter must be stocked with several 16-layer cakes and deep dish pies, but also many food items you can't imagine people ever ordering, such as rice pudding, pineapple topping, green Jell-O, and Oreo cheesecake. Where these foods go or where they come from is like asking how socks get lost in the dryer or wire hangers mysteriously multiply in our closets. It just happens.

The Check
O.R.D.E.R.U.P. stipulates that the check should be handwritten and illegible, especially to someone wanting to know if he was charged for that extra Diet Coke. It should contain a math mistake corrected with a huge slash or overwritten numbers. The back of the check can have no more than two of the following three features: a first name, a goodbye greeting, and a smiley face. Use of all three should be reported immediately to the O.R.D.E.R.U.P. protocol crimes division.

And I'll compare my hometown diner's egg's, toast's, and potato's to anyone else's, any time.