By Sasha Emmons for Parenting.com

When we moved from New York to Toronto last year to create a less hectic life for our kids, one of the things I was most excited about was eating family dinners together every night. Between long commutes home to Brooklyn and early bedtimes, sitting down en famille just wasn't happening, and it ate away at me. My nanny fed the kids and then my husband and I suppered late, um, usually in front of the TV.

But in Canada, things would be different. I would expand my recipe repertoire and we'd eat delicious fresh food. We'd all share the day's happenings and then discuss world events. My husband Justin and I would raise sparkling conversationalists who always said "please" and "thank you." In the process, we'd lower our kids' risk for depression and teenage pregnancy and boost their grades. In my mind's eye, we'd wear artfully mismatched ensembles from J. Crew while we did it.

Here's the reality, from our dinner last night: There's ground turkey on the floor, along with a fork, and a smear of guacamole on the placemat. To diffuse the nightly argument over who gets to sit by Mommy, Julian is sitting on my left, with Chloe on my right, and Daddy all by his lonesome on the other side.

Despite the fact that tacos used to be our no-fail go-to, Julian, whose 3-year-old superpower is being contrary, is whining that what he really wanted was pesto pasta. He's been out of his seat three times already -- once to pee, once because he fell off his chair, and once just to Chinese fire-drill the table.

Meanwhile, Chloe's happily chowing down tacos -- with her mouth wide open. I nag her relentlessly about table manners, but my lovely 8-year-old daughter could not care less that there's a ring of taco seasoning around her mouth. I've asked her what happened at school today, but I'm reminded by her shrug that the worst way to get that information is to ask directly for it. Julian's main contribution to the conversation is to announce periodically that, yet again, he has farted.

Plus: This is 8 Years Old

Justin and I look at each other and sigh. Why are we doing this again?

To be fair, my kids are actually not all that finicky. Chloe even asked to try hot sauce last week. If incentivized with some kind of treat, both kids will almost always try something new, and will usually eat a respectable amount of what's on their plate. Despite its lack of pesto pasta-ness, Julian did end up eating the tacos. I would appreciate some big ups for the homemade guacamole but I will settle for grudging consumption.

The more galling problem for us is table behavior. There's no other time of day I nag and scold more than at dinner.

And so I went to Jenny Rosenstrach for help. Years ago, Jenny committed to eating dinner with her husband and two daughters pretty much every night, and she started a blog (and then wrote a gorgeous book) called Dinner, a Love Story to encourage other parents to do the same. She says in her book that family dinners have "done more to foster togetherness and impart meaning and joy into my family life on a daily basis than just about anything else I can think of."

How can I get what she's having? And what are we doing wrong?

Jenny assured me it's not just me. "It's why people give up family dinners, because of that romanticized version of it," Jenny told me. "When you're actually in it, you have to recalibrate. Figure out your new normal, because it's always changing, and embrace it. And know that every year the normal will get closer to your ideal."

She kindly sympathized that I share the table with a preschooler on a nightly basis (her daughters are older and presumably less gaseous now), and then shared her wisdom.

Set the bar low. Like, way low. Jenny says I should consider a little kid sitting for a 10-minute dinner a success. So that taco dinner was actually a win.

Don't set the stage for anxiety. Some nights I sit down already stressed out -- and that's before anyone's even spilled. It's not easy to plan, shop for and pull together dinner when you work full-time. When little people -- little people who are extremely accident-prone -- are hanging around and trying to "help" in the kitchen, it's enough to send me over the edge. Sure I'll, look for the easy, safe jobs my little guy can handle without me hovering, but I am hereby letting myself off the hook if Julian watches a little TV while I drink wine and cook. That way, I can be in the right frame of mind to make the dinner table a "delicious and happy place," like Jenny recommends.

One thing at a time. No one's perfect, and kids are particularly imperfect at the end of the day. Jenny assures me that family dinners everyone actually enjoys are achieved bit by bit. Focus on using your napkin this week; not interrupting the next.

Remember why you're doing it and keep at it. There are a lot of good reasons to come together at the table, but here's another great one I hadn't even thought of: "Kids don't know how to have conversations anymore because the currency is texting and e-mailing, and all these conversation skills are being erased by electronic devices," Jenny says. "The dinner table is the answer to that."

Plus: Dear Daughter, Here's Why I Work

Although the idyllic family dinners Jenny describes in her blog and book feel like a pipe dream, she assures me they are the result of many little hard-won milestones, and well, just kids growing up.

And really, when I look back over the months since we moved, I see progress already. I have mastered a dozen new recipes. I even cooked with kale, and one of my kids actually ate it. My kids clear their plates from the table every night, sometimes without me asking. Cribbing from the Obamas, we've gotten the kids to open up by playing Roses and Thorns, although Julian's never really not sure if what he came up with is a rose or a thorn.

Family dinners are an investment. It's that block of time every day where we do the hard work of de-animalizing our children and turning them into people you'd like to sit next to at a dinner party -- or at least ones who won't let one rip during the salad course. And as I tell my kids, hard work isn't always fun but it's worth it.

So tonight, I will smile, we will eat, and I will kindly ask my children to sit on their bums. Because the 507th time's a charm. 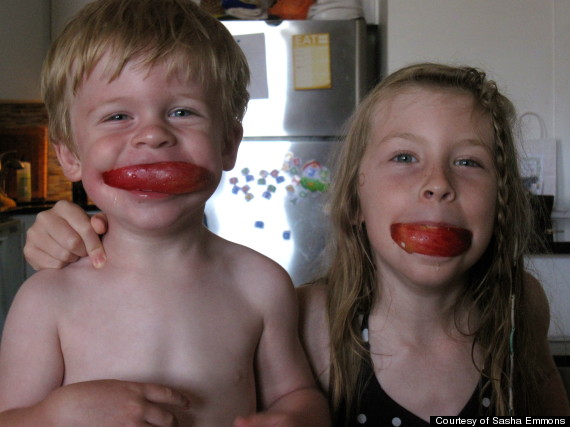