The Page Six cartoon - caricaturing the police shooting of a chimpanzee in Connecticut - has created considerable controversy. The cartoon shows two police officers standing over the chimp's body: "They'll have to find someone else to write the next stimulus bill," one officer says.

More recently, a photo emerged, taken from a window display at a Georgia bookstore. It shows several books featuring Barack and Michelle Obama, and then shows another book, positioned squarely in the center of the display, that features a monkey. 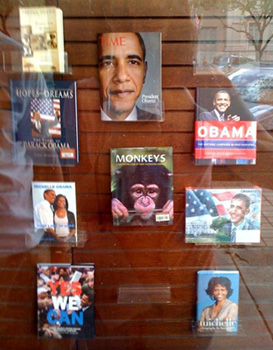 While this demonstrates the undercurrent of racism in the collective consciousness, what is less apparent is how race and racism operate predominately at the subconscious level, which in many respects, makes it more insidious, less apparent and, seemingly insolvable.

It seems insolvable because no one has addressed the real, underlying issue: cultural conditioning.

There is a tool called the Implicit Association Test or the IAT. The Race Test measures unconscious or automatic associations of "good" and "bad" with Black and White people.

When it comes to gender and racial equality, most people know what their opinions are. Most people have no idea what their unconscious attitudes are about race. While many IAT testers would declare themselves racially neutral, more than 80 percent of all of those who have ever taken the test end up having pro-white associations.

The election of the first African-American president appears to be triggering and resurfacing racial perceptions at the deepest unconscious levels. The reason that these perceptions have not disappeared, permanently, is because they have not been addressed at the level where they have the most impact: the subconscious level. Until we can address it at that level (not just white people, all people) true healing will never occur, and we will continue to witness the external manifestation of internal belief systems.

It is critical that everyone get clear about their own belief systems, so that they effectively navigate their cultural conditioning, and ultimately, create the seeds of a society that is tolerant, loving and inclusive...from the inside out.

To find out more about cultural conditioning and its impacts on performance, visit www.theblackpaper.com To take the IAT visit www.understandingprejudice.org/iat.