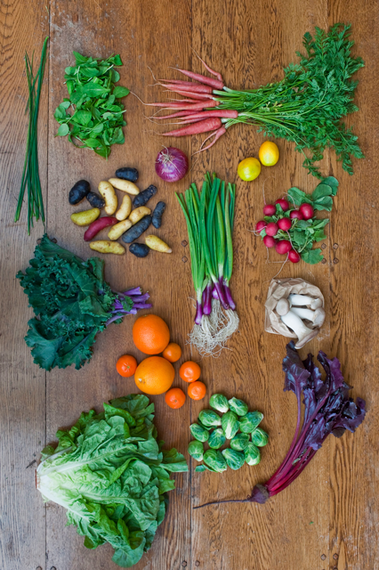 When it comes to diet decisions, there are few things more divisive than the issue of genetically modified organisms, a.k.a. GMOs. These crops, which include ubiquitous ingredients in our food supply, such as corn and soy, make news regularly whenever yet another food company decides to take a stand against them: Chipotle, Del Monte, and Hershey Foods are among the biggest names that have bowed to consumer pressure to offer non-GMO products. Well-meaning activists applaud these efforts, but is there really any reason to avoid GMOs?

Despite GM foods' controversial reputation, scientists have yet to find a link between these crops and health or environmental issues. Last week, the National Academies of Sciences, Engineering, and Medicine released an exhaustive report -- the largest safety review yet -- that concluded that genetically modified organisms pose no greater risk than their conventionally grown counterparts.

Yet many people still believe GMOs are inherently dangerous. Ahead, we cover the findings of the report, along with some much-needed myth-busting.

What is a GMO?

If you don't know what a GMO is, you're not alone. In a 2014 survey of 300 shoppers, 59% of respondents expressed concern about GMOs, even though only 32% could come up with a definition. And it's not that people are stupid; it's that sussing out what, exactly, counts as a "GMO" is a complex and ever-changing process.

Farmers have been selecting and saving certain seeds for millennia in order to increase crop yields or improve their products. These days, plant scientists can choose from all sorts of different crop-breeding methods, including simple cross-breeding of plants with various desirable traits (which gave birth to honeycrisp apples) or mutagenesis, which relies on exposing seeds to radiation to induce mutations until you get a desired result. Seed developers created the ruby-red grapefruit with mutagenesis. As scary as radiation sounds, each of these methods safely causes changes to the genes of plants that we eat (as evidenced by how many people eat ruby-red grapefruit without issue), and neither of these examples are considered controversial.

Nowadays, when we are arguing over GMOs, we are mostly talking about transgenic crops, which are "genetically engineered" (GE), not just "modified." With transgenesis, scientists select a desirable trait, such as resistance to the Papaya Ringspot Virus, and transfer the gene into the recipient plant. Examples of transgenic crops include non-browning apples, disease-resistant papaya, and rice fortified with vitamin A, though most of the GE crops actually being grown and sold today are herbicide- or pest-resistant corn, soy, and canola.

What's most important to know about the transgenic method is that it's precise. While the word "frankenfood" suggests a technology that's out of control, in fact just the opposite is true. Whether it's a Vitamin A boost or pest resistance, plant scientists only transfer the gene that possesses the desired trait. "Since about 1996, major seed developers were already asking whether the source of the transgene is known to be allergenic or toxic. If it is, they're very cautious," explains Richard Goodman, PhD, who studies genetically engineered crops and allergenicity at the University of Nebraska.

What this means, the authors of the new report conclude, is that we can't lump all of these foods together as either "horribly dangerous" or "perfectly safe." Especially as techniques for creating GMO foods evolve and expand, it makes much more sense to evaluate the individual new foods for potential risks, rather than focusing so much on how the crop came to be.

Why GMOs can't be blamed for our health problems

Anti-GMO activists insist that there is good reason to avoid foods with genetically engineered ingredients. According to some of the most extreme voices, "GMOs" are responsible for all sorts of health problems, like obesity and even cancer. Others say that we simply don't know enough about how these crops, which were mostly introduced in the '90s, will affect our health in the long term.

But the reality is that it is very difficult to assess how any food, genetically engineered or not, will affect health in the long term. And although we need to continue to be cautious about thoroughly evaluating each new GE crop, there is no reason to believe the currently available GE foods are more risky than than their non-GE counterparts.

According to the new report, scientists have been studying the health effects of the current GE crops for decades, and so far have found no evidence to link these foods to rising rates of obesity, Type 2 diabetes, kidney disease, or celiac disease, nor is there reason to believe they cause cancer. One of the most persistent beliefs about GMOs is that they are behind the skyrocketing food allergy rates, because the first GMO commodity crops hit the U.S. market around the same time food allergy rates in children began to increase. But just because two things happen at once doesn't mean they're related.

That kind of oversimplification ignores the fact that we have an intense regulatory review process in place for evaluating these crops before they're brought to market, says Anastasia Bodnar, PhD, plant geneticist and policy director for Biology Fortified, Inc. In order to gain regulatory approval, biotech companies have to prove they've conducted sufficient testing -- and the FDA, and in certain cases the EPA as well, has to be satisfied with the evidence that these crops are comparable to the currently available crops, and that they don't introduce new allergens to the food supply.

The oversimplified reasoning also ignores other more plausible theories as to why we might be seeing more food allergies. One of those is the so-called "hygiene hypothesis," which posits that our increasingly sanitized lives -- complete with the "over-prescription of antibiotics and living indoors, with limited exposure to 'normal' bacteria and sunlight (vitamin D)," Dr. Goodman says -- could be affecting our immune systems in a way that makes food allergies more likely.

Another theory: "In the early and mid-1990s, many pediatricians began recommending that allergic parents or parents of a food-allergic sibling avoid introduction of peanuts until after the age of two. Then, over 10 years, the prevalence of food allergy to peanuts in children more than doubled," Dr. Goodman explains. "Recent evidence suggests that delaying the introduction of certain allergenic foods (peanuts, cow's milk, eggs, and wheat) in infants until after six months of age bypasses the optimum time for infants to acquire immune tolerance to those foods."

While this report likely won't persuade the die-hard anti-GMO activists, its conclusions should help you feel a little more confident about what's actually going on with the food you buy. Wayne Parrott, PhD, who studies plant breeding at the University of Georgia, says GMOs are really neither the ultimate "panacea" nor "dreaded monsters" that they're made out to be by either camp. "The inescapable conclusion," he says, "is that GE crops are pretty much just crops."