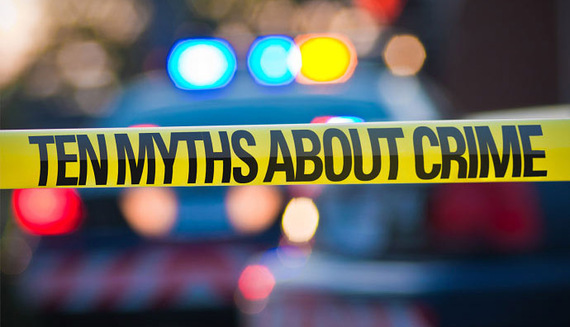 On the same day as the Navy Yard mass killing, new FBI data showed that the violent crime rate declined in 2012 for the sixth year in a row.

Most Americans wouldn't believe it. Gallup has asked Americans in five out of the last six years whether they thought there was more crime in their area than the prior year. Each year, less than a third of respondents say that crime is going down. The sad juxtaposition of the mass murder and the release of crime data makes clear why there is such a disconnect, but the perception that America is getting more dangerous is not supported by the facts.

Here are 10 other popular crime myths and the true story behind them:

Myth #1: Crime is getting worse, if not in your neighborhood then certainly in the "bad parts" of town, which are much more dangerous than when you were a kid.
Fact: If you are under 40, on average you are safer now than you have ever been.

Myth #2: Suburbs are safer than cities.
Fact: True, on average, but the trend is better for cities than suburbs. At the peak of the crime wave in 1991, there were 138 homicides in Prince George's County and 479 in Washington, D.C. Last year, there were 82 homicides in PG (down 40 percent) and 82 in D.C. (down almost 75 percent).

Myth #3: Criminal investigators have enormous data systems at their fingertips that track virtually everything about all of us.
Fact: Police do have access to lots of data, but typically use it to find a known suspect rather than identify an unknown suspect.

Myth #4: Forensic examiners (CSIs) investigate crimes, carry weapons, and can process complex crimes in minutes.
Fact: The typical piece of DNA collected from a crime scene takes months to process (if it is at all) and the civilian processing it is not aware of the facts of the crime.

Myth #6: Fingerprints can definitively match a person to a crime scene.
Fact: Fingerprint matches are entirely subjective and we have no idea whether the cliché that all fingerprints are unique is actually true.

Myth #7: There is an epidemic of children being kidnapped from their homes in the dead of night.
Fact: The FBI estimates that in 2008 a total of 115 children were kidnapped by strangers. A child is more than five times more likely to drown than be kidnapped.

Myth #8
: There are two typical types of offenders: