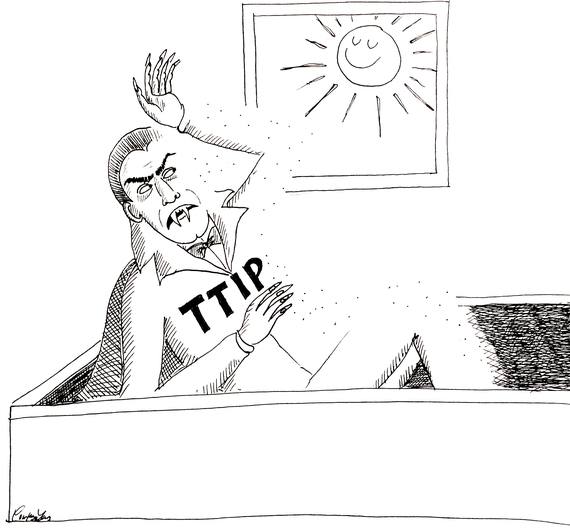 What do Halloween and the proposed Transatlantic Trade and Investment Partnership (TTIP) have in common? Both are packed with things that should make your skin crawl. Earlier this October, I joined a meeting hosted by the Catalonian Campaign against the TTIP in Barcelona to discuss the many risks of the TTIP, a massive proposed free trade agreement between the U.S. and EU. That same weekend, towns and cities across Europe protested the TTIP and its corporate-empowering, fracking-enabling rules. These events reconfirmed that Americans and Europeans share many reasons to fear the trade agreement, including these ghastly features:

1. Secret trade agreements are like vampires. In Barcelona, trade policy expert Susan George stated that, like vampires, the TTIP could not survive the light of day. Even though the agreement would have huge impacts on everything from the food we eat to the energy we use, the European Commission and Office of the U.S. Trade Representative are negotiating the TTIP in complete secret. The U.S. and EU public, press, and government officials are not allowed to see the negotiating texts.

Meanwhile, in the U.S., hundreds of "trade advisors," almost exclusively representing corporations, do have access to key texts and are actively influencing the pact. Our government should allow the public, at the very least, to have the same access to the texts as Halliburton has. And as Senator Elizabeth Warren has stressed, "If transparency would lead to widespread public opposition to a trade agreement, then that trade agreement should not be the policy of the U.S."

2. Rise of the toxic sludge (in your drinking water). The U.S. is pushing for the TTIP to contain rules that empower corporations to sue governments--before private trade tribunals-- over virtually any policy that the company claims could impact its expected future profits. Similar rules in the North American Free Trade Agreement have empowered a U.S. oil and gas firm to sue Canada for $250 million in response to a fracking moratorium in Quebec, demonstrating the threats that "investor-state" rules pose to countries and provinces' policy-making processes.

Like in North America, countries across Europe are implementing fracking moratoriums and restrictions, often to the frustration of fracking companies. For example, when France implemented a fracking moratorium in 2011, a U.S. oil and gas company took this decision to court--and lost. Now corporations are pushing for the TTIP to give more "protections" to oil and gas companies, which - based on the NAFTA precedent-- would allow foreign companies to circumvent government and court decisions over energy policies, and sue taxpayers over policies that companies deem inconvenient. In light of the air and water contamination and climate-disrupting emissions associated with fracking, the last thing communities need is rules that threaten their ability to regulate it.

3. The rise of Frankenfoods. In the EU, safeguards around genetically modified organisms (GMOs) are some of the strongest in the world. The EU bans or restricts the import of GMO products and requires that GMO foods are labelled. The U.S., however, has no national laws requiring the labelling of GMO foods, even though polls indicate that more than 90 percent of Americans would support GMO labelling. In response to citizens' concerns, more than 20 states have introduced over 60 bills that would require GMO labelling in these states--proposed rules that GMO-producing agribusinesses vehemently oppose. The TTIP would give industry a new vehicle to threaten these policies, as the trade agreement would likely identify GMO-labelling policies as "barriers to trade," which could both stymie U.S. states' efforts to label GMOs, and threaten the EU's GMO regulations.

Be afraid. The TTIP could prevent countries and states from implementing policies that protect communities and stabilize the climate. Fortunately, people in the U.S. and EU are mobilizing to highlight the many tricks-- and no treats-- of this pact. With enough public pressure, U.S. and EU negotiators may finally be compelled to release the TTIP texts. Then we'll see whether the TTIP can survive the light of day, or will go the way of the vampire.