In a bloody season where Turkey's vibrant summer has given way to the turbulent environment caused by frequent terrorist attacks -- including this weekend's IS bombing near a wedding in Gaziantep as well as the July failed coup attempt -- there are still those who passionately continue to believe in Turkey's strength, universal stature and its natural reputation as the gateway of the East and West.

His first name Emre literally means: "the one who loves to love" and his last name "Erturk" means: "a soldier of Turk." The tall, calm, flamboyant designer is in his early 40s. His day job is from politics yet he believes that the arts may very well be the answer to many of today's global calamities.

"I think the problem in this world is the lack of love, which are resulting all these wars and chaos in our world." said Erturk as he took a sip of his Turkish tea, shook his head, and looked into the sky in a quiet cafe in Istanbul. "That's why I believe artists and designers have a great responsibility right now. Art creates unity, love, and mutual understanding, and that's why artists from all over the world should get on this mission."

His clients range from Hollywood stars and celebrities from each side of the Atlantic to political figures and movers and shakers from around the world. Erturk explained that through his designs and paintings he also aims to share his love of humanity, compassion, and tolerance that goes far beyond the material value of his handbags, sunglasses, and clutches -- all of which are adorned with unique symbolism. The most well-regarded of these symbols are his "evil eye" paintings and designs as well as his "horse shoe" symbol that according to him represent the essence of his work, "to love and to spread love."

He started painting when he was only four years old, close to the time when he had a traumatic episode in the sea that almost took his life. "I was walking on the shore and suddenly the waves took me in," said Erturk as he explained how suddenly, as he was drowning in the sea, a powerful force pushed him out of the water and threw him back on the beach. "I don't know what it was, but it was that universal energy, that magical moment that later on made me realize I'm here for a reason."

When he was still a teenager, at age 18, he was donating much of his minimal income to different charities in Turkey -- including the Aids charity in Istanbul. At 23, he went to London to work on his fine arts and design degree at Schiller university. There, while still a student, he put on his first solo exhibit, where he dedicated the entire collection and all its proceeds to the war victims in Bosnia and the orphans of the Bosnian war. "I remember when I was 24, I did a whole campaign for people to bring their used clothes so we can ship them to the orphans and children in Bosnia." 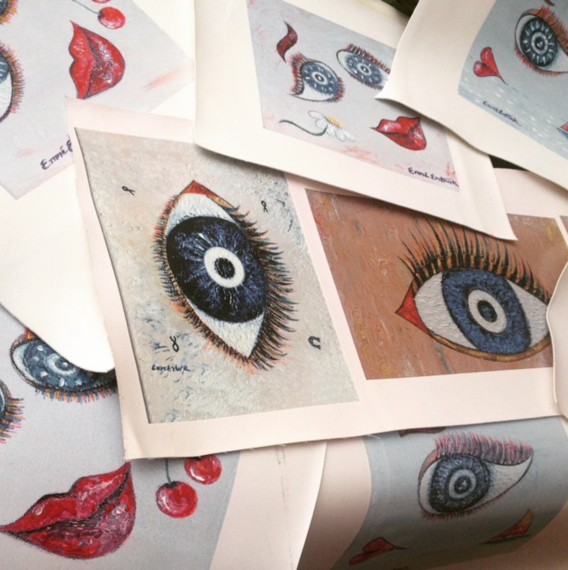 The Artist's Famous "Evil-Eye" Paintings In His Studio In Istanbul

"In beginning, there were times that I would give back everything I would make -- and so many people -- including my mom would think I'm just crazy." said Erturk with a big smile, as he remembered his work in London and New York, where he officially launched his accessories brand "Emre New York" back in 2000. He was one of the first designers in the United States to officially launch "in-flight pet friendly" luxury bags and for many consecutive years was the official handbag designer for the Academy Awards.

Through his art exhibitions and infamous "evil eye" paintings he has supported many global charities and foundations in the US, UK, Europe, India, and Turkey. "Your work is a contact from the universe" said Erturk, as he emphasized on his personal belief in the "Golden Age" discipline -- a "cosmic and mystical" way of life that takes its roots in the teachings of the great 13-century Persian poet Rumi and his reincarnation.

"It teaches us to love unconditionally. Imagine if our politicians, law makers, and those in power would also follow the same beliefs." said Erturk.

The Turkish designer physically transcends his philosophy of unity and love into his accessories and fashion must-haves, like his recently launched "organic, toxic-absorbent" sunglasses that are made in Italy with a unique base that's made of wood, oil, and cotton-seed. He explained that people need to understand "how severely the world is missing love, humanity, and acceptance." Whether it's the political chaos we see here in the region or the climate change we witness globally, Erturk says, "we are all responsible to do our part." 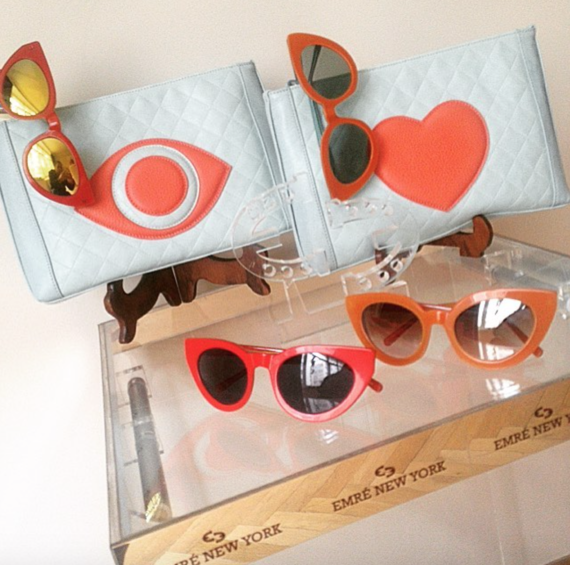 The designer's "Organic, Toxic-Absorbent" Sunglasses and His "Evil-Eye" Inspired Clutch In His Studio in Istanbul.

Holding his sunglasses in his delicate hands, he suddenly recalled the failed Turkish coup in July. He explained how the country and people reclaimed their unity after the coup. "Sometimes things are born out of chaos, but unity prevails at the end. Governments can change, but it's important that people unite together." Erturk's optimism and passion for Turkey's inherent universal nature came through his hopeful sighs as he explained that after the July 15th events, "the non-practicing Muslims are now united with the Muslims, the Turkish Jews are now united with the Muslims; out of that chaotic moment, people didn't forget each other and stood by one another--that's how the world needs to be."

As he got up to leave, he looked at the teenagers begging for money on the streets and said, "you know, this is why I came to this world, to just do a little with my art." 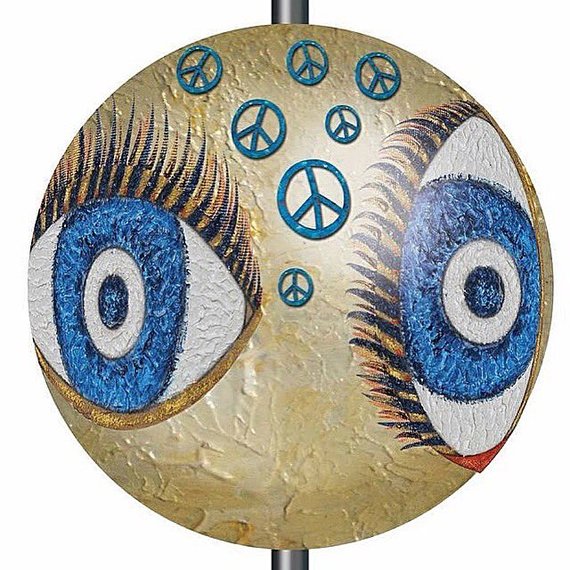 One of Emre Erturk's "Evil-Eye" Sculptures