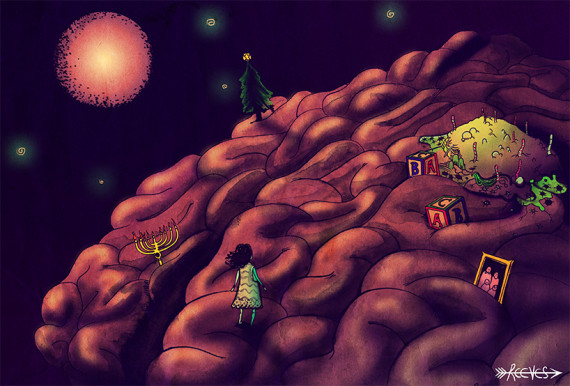 We were most of the way between lunch in Eau Claire with M's cousins and dinner in Milwaukee with a deploying friend. In the hour before, the sunset stretched from horizon to horizon. Bright purples and reds and orange puffs of clouds, hovering over fields glowing gold beneath the sky. Now the sun was beyond the tree line to the west, and a deep rainbow still clung to the air where it submerged, casting a warmth to the wintry purple of the sky ahead.

RH couldn't see the pages of her Pocoyo book, and she called to me from the rear of the car.

"Mommy, can you make the sunshine come back?"

Oh, God, how I wished I could.

I wished I could make the sun stop and go backwards, and spin the Earth the wrong way round, until time reversed itself and I could freeze it exactly where I needed it right then.

I would spin the Earth backwards 2,735 full rotations, and freeze it on a sunny day in July when the heat danced on the outside of our basement apartment, and M and I lay beneath the midday glow of summer -- wrapped in each other's love and the endless flavors of possibility.

I would never give up the now: the dark, cramped, cold hours on a freeway between family and friends, after the chaos of the holidays has mostly passed, with the same awful rendition of The Alphabet Song playing on a loop from our back seat for eight hours and then some, winding out the gloomy December day.

I would never give up the darker times that always seem to follow the bright.

I would hold onto those hours after the Christmas presents were opened and the house was asleep, when I lay in bed and cried silent tears because it had been so good. It had been so joyous, and full, and there had been so much laughter and so much love, and if this was his last Christmas there was nothing anyone could have done to make it better.

There was nothing anyone could do to change it that would make it less painful in future years, if this was his last Christmas, so I cried because I wasn't ready for the best to be here. I bit my knuckles while my tears flooded my ears and I waited for Xanax to calm me to sleep, because these are my dark times. The moments when the not knowing, the endless not knowing, is so much I can't bear it.

If I could bring back the sunshine, if I could make the sun come out from behind the clouds...

On the heels of every happy moment, doubts follow me.

When I collected his photograph from the studio, framed and matted with its velvet backing, I cried. The nice girls in the nice shop smiled kindly, used to weeping mothers and wives who come for their happy memories.

I cried for the child in the picture, the toddler with her lips pursed, ready to kiss her daddy's cheek, because we don't know. For another few hours yet, I won't know. I'll sit in the friendly lobby of the MRI suite and not know until the news is ready. And this month I'm worse at waiting. This month I'm frazzled from lack of sleep and a house knee-deep in empty cardboard boxes from Chanukah and Christmas presents that are somehow already broken or lost and replaced again. I have an image in my mind of a toddler grown into a girl whose best memory of her father is a framed photograph of how much they loved each other when she was small. 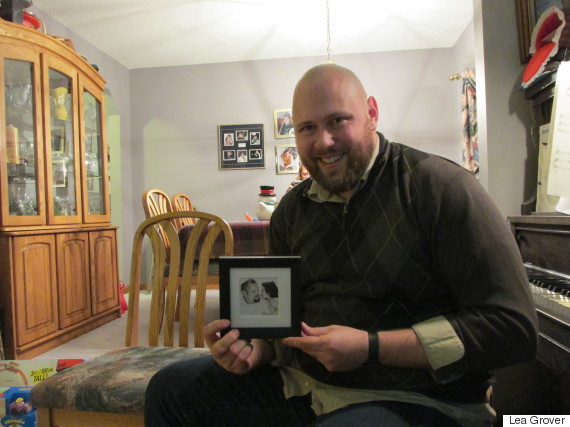 She asked me to bring back the sunshine, but I have no power over light. I have no control over tides and clouds and microscopic infiltrations of a tumor we beat years ago, like a vampire chased away but never killed. Whose ashes we never sprinkled into running water to ensure they would never return.

It's a specter of destruction, our unknown, and some nights I laugh louder and drink faster and dance harder and hug tighter and read all the stories that mock the darkness and do the funny voices for the children. Sometimes I find myself teaching them to laugh at shadows, to find familiar friends in their darkness, because I can't bring back the sunshine.

The children spent their vacation in Minnesota climbing all over their father. Burying him in pillows, playing catch with him, chasing him around the house and snuggling onto his lap. As though somehow they shared the dull anxiety I carry increasingly longer and sooner before these days when I wait and our friend the oncologist can wash it away. 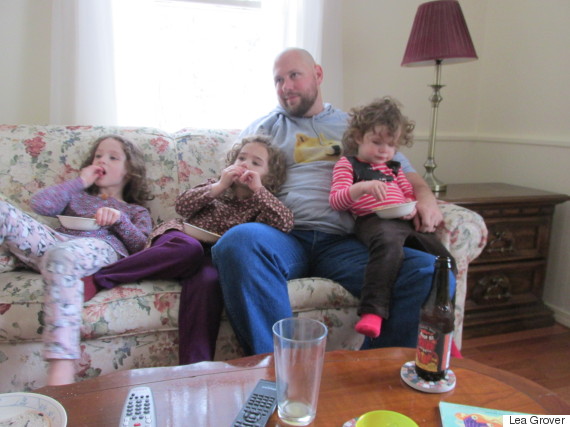 I can't tell myself any longer that each time is the same, that one day it will be different. The truth is that every time is different now. Every time we're waiting to see if THIS is the time, not that there's something, because now there will always be something, but that there is enough something. That it's time again to pick our poisons and spin the roulette wheel of radiations and surgeries and consultations and brave faces.

My brave face is always on for the children, always firm but kind as I say with a sigh that I can't bring back the sunshine. But I wish I could, honey. I wish I could.

If I could spin the Earth backwards around the sun, I would go back to the sunny days when he tickled his daughters and they laughed and squealed and jumped all over him because they love him so much, and no matter what the stresses at work he knew everything was worthwhile.

I would go back to the mornings we lay in a different bed, the sunshine coming under different curtains, and listened to our children laughing. Listened to them singing their songs, and telling their stories, and laughing with each other; and us, aside. Other. Clockmaker parents in the sunset of the greatest joy I never knew I could imagine.

I would stand outside of those moments, after spinning the sun, so I could always know. This is the thing we chose together, these children we had no idea we could love so much, these girls we didn't know would have the sweetest smiles and the brightest eyes, who would look so much like us and yet like only themselves, who loved us so intensely. Who love him so much they could never understand why I lie in the dark and cry over happiness.

But because it's not fair. It's not fair to see the sunshine, to see it shine so bright and so warm and know the day will end. It's not fair to choose between long afternoon naps in a family puddle and adventures outside with the sun on your cheeks. 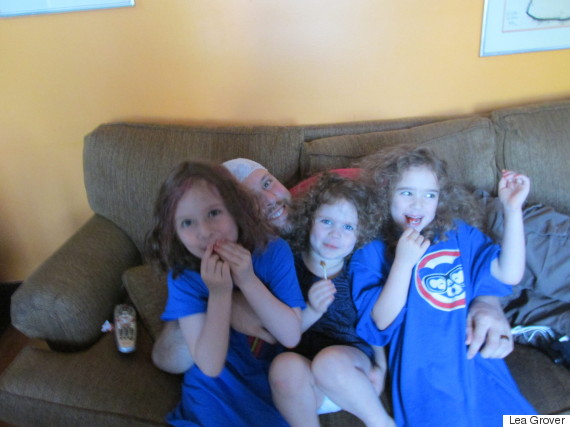 And if I could bring the sunshine back...

If I could only bring the sunshine back...

"Mommy, can you make the sunshine come back?"

As simple and straightforward as passing her a bag of crackers, or picking her book up off the floor. Because I'm Mommy, I'm the omnipotent creator of darkness and light, of food and clothing, of routine and chaos. To her, I am just as capable of bringing back the day as I am of opening her juice box. 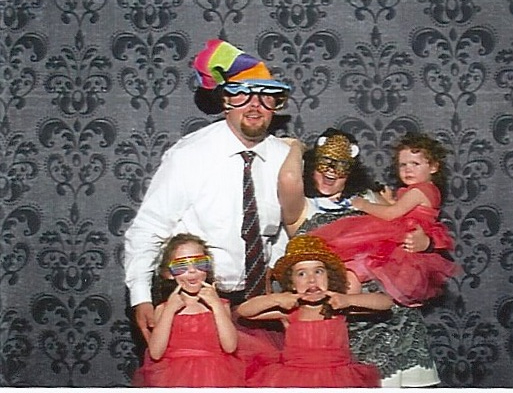 I am the man behind the curtain, pulling levers to emit puffs of smoke and the rumble of thunder, crying myself to sleep when the children are tucked into bed. Because I can't bring it back.

This might be twilight, but night is coming. And I have no way of knowing if tomorrow the sun will shine again.

This post originally appeared on Becoming SuperMommy, and was one of four winners in the Term Papers competition at the 2015 BlogU Conference in Baltimore, Maryland.

I'm A Teacher Who Works Hard For Your Children. Unfortunately, I Can't Afford To Have My Own.