This is a guest post from my friend Barbara Drake, a freelance writer living in Peru who blogs at An American in Lima.

Two years ago Barbara wrote an article for The Miami Herald about bullfighting in Peru and the public's disenchantment with the brutal sport.

According to one study, 79.7% of Peruvian citizens living in Peru's capital city of Lima oppose bullfighting. Likewise in Spain, discontent with the cruelty has led the Catalonia region to consider banning the sport. About 250,000 bulls are estimated to die each year in the nine countries that allow the sport, with 60,000 of the kills occurring in Spain.

Last year as the bullfights in Lima came to a close, Barbara reflected on her experience.

Confessions of a Redhead in the Callejón: What I Learned at the Bullfights

by Barbara Drake, An American in Lima

Near the end of November, the penultimate bullfight of the Señor de los Milagros festival was held in Lima's historic Plaza de Acho bullring.

My photographer husband and I didn't go to any of the corridas this year, and we don't plan to in the future. A native Peruvian, Jorge is grossed out by bullfighting, even though he admits the sport makes for great picture-taking, especially when you have permission to stand inside the callejón, as we did last November. (The callejón is the low-walled alley surrounding the bullring where the toreros enter and exit the sand circle or ruedo. Occasionally a bull will leap or knock over the wooden wall, injuring or even killing onlookers.)

My response to bullfighting is more complicated than Jorge's, but the end result is the same: I'm staying away from Acho.

My husband and I were allowed in the Plaza de Acho callejón as reporters covering the event for the Miami Herald last year. (See "Battle of the Bulls," MH, Nov. 21, 2008.) Jorge had been dragged to the bullfights as a child by his father, a gregarious, cigar-smoking businessman who thought his two sons should experience "true" Peruvian culture by watching the ceremonial carnage in the sombra (shaded) section of the stadium. The exercise of claiming one's cultural patrimony was lost on Jorge, who hated witnessing the bloodbath and didn't like the heady smell of anticuchos that permeated the pink-walled arena.

When Jorge and I covered the bullfights at Acho last year, it had been more than 30 years since he had stepped foot in the world's second-oldest bullring, built in 1766.

As an American, I was a newcomer to the pomp and carnage of a bullfight. Like many first-timers, I was nervous that I might become nauseated or even faint once the killings got underway. However, unlike Jorge and his brother in the '60s, nobody was forcing me to go to a corrida; it was my idea. I pitched the story to The Herald, I convinced Jorge to take pictures, I coerced him to help interview lanky Spanish torero José Uceda Leal at the stadium one afternoon.

Jorge and I saw two bullfights last season: a novillada featuring the 10-year-old bullfighting prodigy "Michelito" along with a 19-year-old female bullfighter Milagros Sanchez and a hapless Mexican girl who got tossed by the bull and booed; and a full-fledged corrida with Uceda Leal and two other top toreros who went up against six bulls. Those two days of bullfighting showed me the best and the worst of the sport.

On a few occasions the top bullfighters performed mesmerizing pas de deux with the massive one-ton animals, turning the ceremonial killings into taut meditations on death and combat. There was blood, but the killings took only a few minutes. As long as the deaths went quickly and smoothly, the cruelty appeared to be justified (just barely) by the elaborate ritual, which turned the bloodshed into a catharsis for some spectators. Timing was everything. It didn't hurt that the men were painfully handsome to look at.

Anything less than perfect mastery, however, and the spectacle degenerated into a tedious, sickening massacre, particularly at the end. Inexperienced bullfighters, or great ones on an off day, often meant that death strokes missed their mark. Swords failed to pierce the heart on one thrust, bulls staggered around vomiting blood for 10 minutes or simply stood looking at their human tormentor not like toros bravos but as confused, suffering animals that just wanted to lie down and take a long nap. Those scenes tore at my heart. The toreros no longer resembled heroes; they were sweaty guys in tights taking too long to kill a cow.

When things got really bad, even the toreros themselves broke down. Chubby little Michelito burst into tears after stabbing a young bull repeatedly in its bony back without success. His father or a manager comforted the sobbing child by passing a handkerchief. Finally, the helper toreros rushed to reposition the sword so the blade passed through bone and gristle into its beating target. The whole affair was disgusting, repetitive and pointless -- the antithesis of the fiesta brava that fans romanticize. And lots of bullfights are like this. 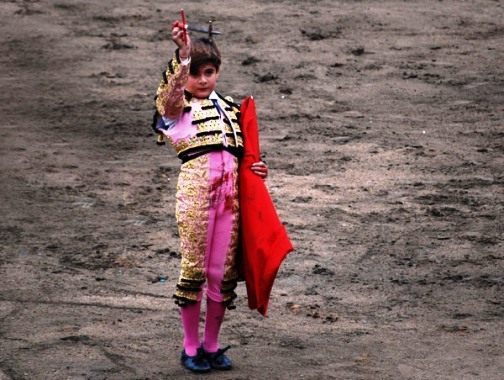 Halfway through our second corrida at Acho last year, Jorge announced: "I've had enough." That was on the day when Uceda Leal and David Galán were in the bullring, doing some amazing footwork and working the well-dressed female spectators into a lather. Ladies in wide-brimmed hats were throwing red carnations over my head as they shouted Ole! At that point, I too was caught up in the spirit -- I had forgotten the sordidness of the previous day's novillada -- and I didn't want to leave.

But Jorge was adamant. He had gotten his photos. He didn't need to see any more killings.

I didn't want to tell Jorge but I was having an unexpected reaction -- not to the bullfight, per se, but to being inside the callejón with the bullfighters and their costumed assistants.

I wanted to jump into the ring and fight the bull.

Five minutes earlier an enormous black bull had rammed the wooden wall I was crouched behind. The impact sent shock waves through my body, making my heart race with adrenaline. Toro bravo, my neighbors called out, nodding with commiseration. Suddenly I was part of the inner circle. All around me were tough guys in embroidered outfits, some of them stout, muscular Peruvians who obviously lived to assist at Acho one month out of the year. Those assistants ducked in and out of the ring, deflecting the bull's attention from the matador at key moments, assisting with swords and even picking up a fallen bullfighter when he was tossed on his back. I watched these athletes leaping into the ruedo, and it gave me the feeling that I could do it too -- that I could grab a red cape and taunt a bull and come away unscathed.

I had no desire to stab a bull through the heart. Live and let live. I wanted to wave the matador's cape, pivot and trick a ferocious 2,000-pound horned beast into charging within a few centimeters of my slender hips (yeah, right). The toreros made it look so easy.

I guess you could say I was having a testosterone moment out there.

While I was struggling with this hugely unexpected response to being in the callejón, where women are traditionally banned, Jorge was packing up his gear and motioning me toward the exit.

I saw the weariness and disgust on his face, stuffed my reporter's notepad in my pocket and crept out of the callejón, unwillingly.

Earlier in the afternoon, a loudmouthed man in the stands had called out, scandalized: "There's a woman in the callejón-- and a redhead, yet!" (Who knew my hair color was a curse in the tradition of tauromaquia?)

Now I was losing my status, stepping out of the elite danger zone into boring Everyman's Acho. What a letdown.

Once he'd prodded me through the rear press gates, Jorge raced to the front of Plaza de Acho and began photographing the 200 or so anti-bullfighting protestors gathered there. "Assassins!" shouted the young, earnest antitaurinos. They waved signs of bulls vomiting blood and mucus, of crazed-looking matadors holding up severed ears as prizes. None of it was Photoshopped. The images were the outtakes that editors reject.

It was a sobering moment that helped shake my ridiculous fantasies of becoming the next great female bullfighter -- the Americana who defies the bull's death-giving horns but abstains from killing the toro itself. La Colorada, the merciful bullfighter. What horseshit, really; Peru isn't ready for bloodless bullfighting. But hunkered in the callejón, a part of me had wanted to become that girl torera.

My husband and I hailed a cab and went back to our so-called normal lives in Lima where the closest we come to physical danger is dodging kamikaze combi buses on the street.

I never mentioned my personal experience of being in the callejón. I wrote the news story and did a few blog posts about bullfighting, but I kept that surprising, somewhat shameful epiphany to myself. When the 2008 bullfighting season ended, I forgot about it.

But a tiny voice inside me said, 'You know you want to risk standing in the callejón again. You could do it. You could get a press pass and be there as a reporter and get off on the macho buzz of the thing. You could.'

I listened to that thrilling, seductive voice and knew I was on morally shaky ground. At the end of the day, Spanish-style bullfighting means a pile of dead bulls with their ears sawed off.

I made the choice to say no to Acho this year.