Recently the CEO of Twitter, Dick Costolo, said that "We suck at dealing with abuse." Something those of us who use Twitter already knew. He vowed to act tougher on it, but here we are over two months after that statement, and the sucking at controlling abuse continues. Suckety, suck, suck.

Every social media outlet has its trolls, some platforms deal with it better than others. Even news outlets like HuffPost had to make radical decisions to deal with trolls. They decided to end anonymity and poof, the trolls were gone, and so were the death threats. Arianna Huffington has been very vocal about the dangers of anonymity:

Freedom of expression is given to people who stand up for what they're saying and who are not hiding behind anonymity.

Twitter's troll problem is not new, and by their own admission it has been a huge issue. Twitter is a private platform just like comment sections in news outlets, so it can control the trolling any way it wishes, but it hasn't. What makes this especially bad is that most of this trolling is misogynistic in nature. The gamergate hashtag is just one example of that.

This same misogyny and harassment can also be seen with the Gunsense hashtag -- a hashtag used by gun safety advocates and Shannon Watts from Moms Demand -- a grassroots organization working for gun sense in our country. This hashtag is trolled regularly by pro-gun, NRA types which results in shameless comments. Shannon's tweets and Moms Demand tweets are also trolled non-stop.

As a matter of fact, if you say anything pro-gun safety you will be trolled -- hashtag or not -- by a legion of trolls. I have personally been the victim of that many times. But by far, nobody gets it worse than Shannon Watts of Moms Demand, and her organization. Check out her timeline on Twitter any time and you will see what I mean.

Here's one that was sent to the Texas Chapter of Moms Demand from "Ross". Ross seems angry.

As does Eric Reed. 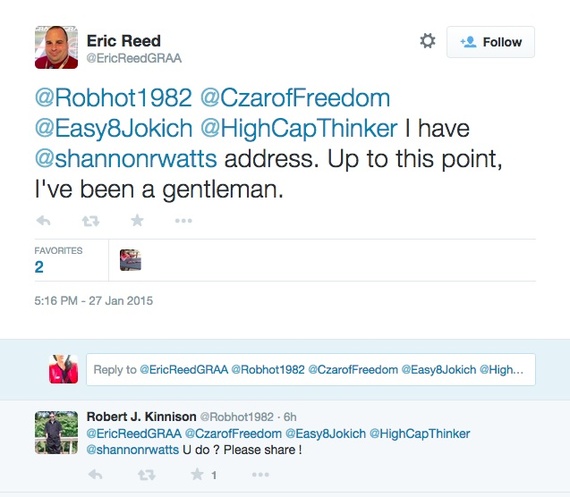 So, sucking at abuse control continues.

Shannon Watts had this to say about all of the harassment:

We take these threats seriously, but we are also emboldened by them. We also know that these are the extremists we are dealing with here -- and that a majority of NRA members and gun owners support the common-sense public safety measures we're fighting for. But no fight for cultural change comes without resistance and given the enormous influence and impact the Internet has on our daily lives, this type of extremism is an unfortunate part of the fight.

Twitter, Facebook and blogs make it easy for extremists to make threats, but these platforms are also integral to helping Moms spread our vision of gun sense - the simple idea that we can be doing more to protect our children, families and communities from gun violence.

All of these folks seem angry, at women mostly. And doxing -- a practice that outs the addresses and locations of those who wish to remain private is a tactic that pro-gun activists use often. An app was just removed from the Google Play store that was being used to dox Gun Safety Activists, most of whom were on Twitter not using their real names. For what use, I will leave it up to you to decide.

Many people are choosing to leave Twitter or take a break to avoid this harassment as Chrissy Teigen famously did after receiving death threats after posting a tweet about a shooting:

active shooting in Canada, or as we call it in america, wednesday

This is what happened as a result of that tweet:

and this is where @twitter needs to step their game up. pic.twitter.com/oGmTXgEwdL

We review all reported content against our rules, which prohibit targeted abuse and violent threats.

Not too enlightening, nor does it express any change has taken place.

Twitter has a problem, like many others before them, and it is failing in protecting their users -- women in particular against misogyny -- and other threatening behavior. Others have acted, time for them to act.

Activist and Writer from Chicago