TV shows like Girls and Broad City have made vibrators mainstream, but the sex toys still aren't exactly easy to choose, especially if you're a first-time vibe-buyer.

Pamela Doan of the New York establishment Babeland, gave us the lowdown on the store's most popular vibrators and toys, depending on what the buyer is looking for. Her main advice? "Go to the top of your budget," says Doan. You don't want to skimp on something you're putting near your genitals, apparently.

She suggests the small Jimmyjane Iconic Bullet ($16). "It's kind of buzzy and hard plastic, so it's easy to clean," she says. "This is an external toy, so you would use this for clitoral stimulation, primarily." The small vibe has two speeds.

If you're ready to spend a little more, Doan likes the Lovelife Cuddle G-spot Vibe ($69). "This toy has a lot more customizations," she says. "It has a motor, it's rechargeable and it has a lot more functions. It has seven different speeds." Doan says go for rechargeable vibrators instead of battery-operated vibes if you're looking for more power. The Cuddle's medical-grade silicon material makes it softer -- Doan calls it "velvety" -- but it's still just as easy to clean as the hard plastic material. An added bonus: Silicon vibes tend to be quieter than the hard plastic ones.

Lelo's Gigi 2 ($119) is sleek and comes in a variety of colors. "It's beautiful," says Doan. "They're really discreet -- the Gigi is your aspirational sex life." The Gigi also has several settings, patterns and styles.

Want to keep your vibe close? Try the Crave Vesper ($69 to $149). The sleek toy functions as a necklace and looks like a bullet or nail on a chain.

Years later, it's still a hot item. The Rabbit's "ears" stimulate the clitoris ($39 to $90), while the main shaft of the vibe hits the g-spot and provides fullness. You can operate the main shaft and the bunny ears independently on some Rabbits.

Couples love the WeVibe 4 Plus ($179). The toy fits inside the vagina on one end and provides clitoral stimulation on the other. The best part? The g-spot side is slim, so the woman's partner can still fit inside with the toy. "Men like it, too," says Doan. "It's one of those things where you need to use lube. On its own, it's a great toy to use."

The JimmyJane Form 2 ($145) has rabbit-like ears. "It's flexible so you can move these around and it kind of nestles right into the vulva," says Doan. "This is going to cradle the clitoris. It's waterproof and rechargeable -- it's very powerful." 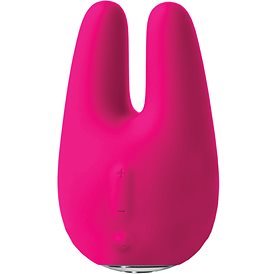