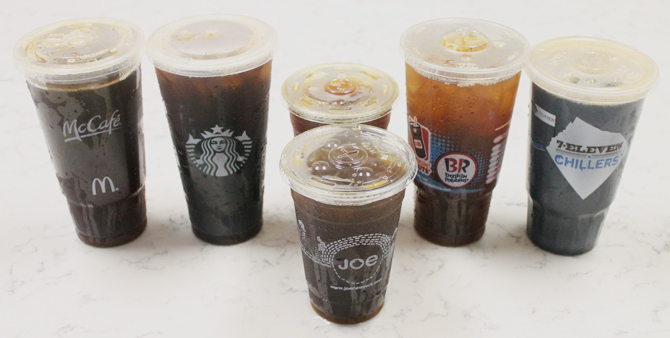 Iced coffee: It's a refreshing jolt of caffeine that keeps us going on long, hot summer days. We all have a go-to iced coffee, whether it's from a chain or independent coffee shop. So naturally, while we fight off a heat wave, we had to find out -- who makes the best iced coffee? (Credit: Jane Bruce)

Of course, the art of iced coffee boils down to a science; some chains use the cold-brewing method, while some independent shops use pour-over or double-strength brewing methods. To learn more about the processes, we talked to Major Cohen, Starbucks coffee educator and product manager with 18 years of Starbucks experience. The chain used the common cold-brewing method for its iced coffee beginning in 1971, in which baristas put coffee grounds with water, let the concoction sit for a significant amount of time (often overnight), and allowed the flavors to slowly seep into the liquid. The chain later switched to the double strengh brewing method it uses today. This means doubling up on the amount of coffee grounds but leaving the amount of water the same. This way, the ice melts into the drink and makes up for its absence at brewing. The result is a coffee that is often crisper and less acidic (that lemony or grapefruit tang) than hot coffee. Cohen says that pouring hot coffee over ice isn't necessarily less refreshing, it just has a different taste profile.

We also talked to Eva, a barista at Joe the Art of Coffee in New York City, where they cold-brew their coffee and saturate the grounds for 24 hours. Iced coffee connoisseurs (including ones at The Daily Meal) say they buy coffee from independent shops because of their cold-brew methods. But Alisa Martinez, Starbucks' communications manager, says that there is a certain stigma associated with supporting the large coffee chain (one whose humble practices haven't changed much since its beginnings in the 1970s). "We've been sourcing and roasting the finest coffee in the world for more than 40 years," Martinez says. So who makes the better iced coffee: the cold-brew guys or the big coffee chains?

On a warm, humid New York day, we braved the heat to get iced coffees from six chains -- Starbucks, Dunkin' Donuts, McDonald's, Burger King, 7-Eleven, and The Coffee Bean & Tea Leaf -- and two independent shops -- Joe the Art of Coffee and Stumptown Coffee Roasters. Eleven participants performed a blind taste test of the unsweetened, black iced coffees (no sugar, milk, creamer, or flavoring added). (After all, we're avoiding plenty of the sugar bomb iced coffees this summer.) We then tested for bitterness, aftertaste, and flavor notes. Once you taste them all in one sitting, you realize how different the coffees are.

After our taste test, some of our tasters are sticking to their morning favorites, while others may be changing where they head for their iced coffee runs. But do we reach for a cup just because of its logo? Do you think you know which coffee reigned supreme? The results may surprise you.

The Ultimate Iced Coffee Taste Test
More:
caffeineiced coffeeCoffeeslidepollajaxsummer
Newsletter Sign Up
The Morning Email
Wake up to the day's most important news.
Successfully Subscribed!
Realness delivered to your inbox