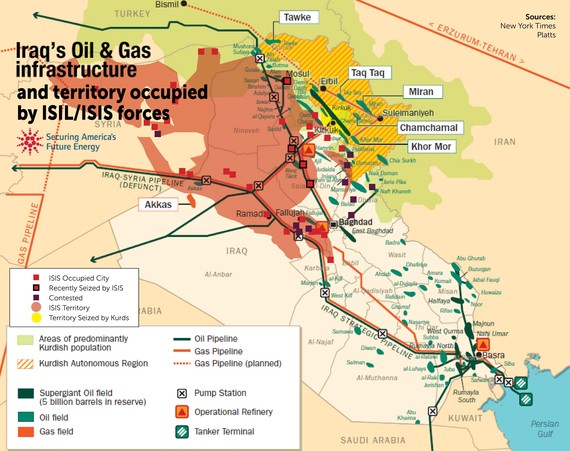 The United Nation Security Council dramatically escalated the conflict with the Islamic State of Iraq and Levant (ISIL), Al Nusra Front (JNF) and other al Qaeda splinter groups by passing UN Resolution 2170 in August 2014, thereby expanding the range of retaliatory measures (short of military action) against individuals associated with those groups. This UN Security Council is the latest in a series of draconian UN Resolutions against terror groups pursuant to its responsibility of Forgotten Obligations and affirming its primary role as peacekeepers enshrined in the UN Charter.

The cumulative effect of these resolutions recognizes the long term threat posed by ISIL which was addressed by President Obama in a White House briefing on the August 18. What Obama did not address however was ISIL's threat to global energy security, which forms (in part) the premise of this article.

The implications of these UN resolutions for ISIL are clear. The UN Security Council has effectively decided to cut off ISIL's main lifeline, which is the illicit black economy derived mainly from the oil resources under its control. Consequently, ISIL's ability to recruit and equip members, consolidate gains if not expand its theatre of operations will be affected. Furthermore, middle men including financiers, arms dealers, traders and Member States now face punitive action for failing to comply.

Whilst I have aired my thoughts on the main features of ISIL's black market economy, I set out in this post, my analysis of the background and significance of the UN's latest bold move against ISIL, ANF and other al Qaeda splinters.

Contrary to the media's one dimensional portrayal of ISIL as a bunch of nihilist extremists, ISIL have moved relatively fast and in a relatively sophisticated manner to create an "ad-hoc" black market economy over the territories it controls. ISIL is no longer desperate for donors' funding to continue and expand their operations given they now possess a loosely integrated and thriving black economy consisting of approximately 60 percent of Syria's oil assets and seven oil producing assets in Iraq. It has successfully achieved a thriving black market economy by developing an extensive network of middlemen in neighboring territories and countries to trade crude oil for cash and in kind.

ISIL's estimated total revenues from its oil production are around $2 million a day! Put simply, ISIL are in a position to smuggle over 30,000 barrels of crude oil a day to neighboring territories and countries at a price of between $25 to $60 per barrel depending on the number of middle men involved.

In order to maintain its black economy, ISIL are operating a "basic" supply chain including arrangements with truck owners to transport crude oil as well as controlling smuggling routes. The crude under their control in Iraq is also sent to rudimentary refineries under ISIL control in Syria which require a sustainable supply of feedstock which ISIL can then sell on as refined products. ISIL also rely on oil products smuggled back from southern Turkey in exchange for their crude.

Apart from the threat of self-financed terrorism which poses a major long term threat to global security, the immediate concern of international investment banks and countries, particularly those in the MENA region must now be an increase in money laundering. The fact that thousands of ISIL members hold western passports will render stakeholders in the financial services, legal and property development sectors vulnerable to falling foul of local and international anti-money laundering laws and regulations. The phrase "know your client or business partner" will take on new and urgent meaning.

Can the impact on ISIL's control of oil smuggling from Northern Iraq and Eastern Syria have a significant effect on supply to global oil markets? In the short-medium term the answer is negative.

This is due to the fact that Iraq's main oil fields in the North, particularly Kirkuk which produces approximately 600,000 barrels a day before it was taken offline, is under the protection of the Kurdish Pershmerga forces. The remainder of Iraq's oil production which constitutes approximately 80 percent of oil production is located in the South and will continue to be available with no disruption in supply given the distance to the territories controlled by ISIL and the local imperative to safeguard the producing oil fields and some of Iraq's holiest shrines.

Can we then breathe a sigh of relief? I'm afraid, the answer is also negative.

Any continued hindrances by ISIL to thwart the Government's efforts to reach its target of producing 9 million barrels of oil per day by 2020 will detrimentally impact on international oil markets ability to forecast and plan the availability of global oil supply. By way of illustration, the International Energy Agency in June reduced forecasts for Iraq's oil production up to 2019. Perhaps this is indicative of the IEA's forecast of an escalation in hostilities impacting on Iraq's ability to produce and export oil.

International oil companies' ability to continue operating under the terms of their concessions will be prejudiced which may impose additional financial burdens on Iraq's Federal Government as well as the KRG if those companies are not able to enjoy a stable political and economic environment. Naturally, the safety of IOC employees working in concession areas remains paramount in their consideration.

Furthermore, ISIL's territorial gains may reverse the trend of an increase in foreign direct investment which the United Nations Conference on Trade and Development estimated this year as rising by 20 percent compared to 2013 which was before ISIL's takeover of Mosul and its surrounding areas.

Main Features of the UN Resolutions

The UN resolutions deal with a number of obligations on member states to enforce punitive measures against listed individuals in the UN Sanctions list, including international travel bans, asset freezes and arms embargos. More importantly measures include the prohibition of their "nationals or any persons and entities within their territories from making any funds, financial assets or economic resources or financial or other related services available, directly or indirectly, for the benefit of persons who commit or attempt to commit or facilitate or participate in the commission of terrorist acts."

Countries in the GCC region have publicly indicated their willingness to comply with this latest UN resolution by blacklisting or arresting recently named nationals if not forcing senior officials suspected of falling foul of the resolution to resign. It will be interesting to see the level of transparency in Arab Governments in enforcing such resolutions and taking legal action pursuant to money laundering laws and regulations on individuals or groups suspected of converting or transferring their illegal cash in the global financial network or even real estate sectors.

The UN Security Council have wisely established a team designed to monitor violations of the sanctions regime under these resolutions, to report in the short term on the extent of the threat posed by ISIL and al Qaeda splinters, and finally make recommendations for "further action" to deal with the threats posed by these groups. It is worth noting that such further action whilst not explicitly referring to the option of direct military intervention remains a theoretical possibility for now.

I welcome the UN Security Council's explicit reaffirmation in this latest resolution, of the critical role of the United Nations in leading and coordinating the role on combatting terrorism in Iraq. The UN by force of successive resolutions is serious in striking back at ISIL and JNF's ability to conduct its operations and further destabilize Iraq and Syria.

The reality in Iraq as we go to print, is the Iraqi Army and Kurdish Peshmerga have apparently recaptured the strategic dam at Mosul in the North and continue to encounter heavily armed resistance from ISIL. This demonstrates that in the final analysis, only unequivocal support for the Iraqi Armed Forces and the Kurdish Peshmerga from the Sunni tribes in the North with concerted full scale military support from foreign powers will be decisive to overcome ISIL and Al Nusra's control of territories controlled by these groups.

Iraq requires all the help it can get from UN Security Council members, if it is to prevail in this long term conflict. Countries that decide for now to adopt a "wait and see" approach with limited military objectives may look back with considerable regret.

President Obama was quoted as stating in the Hague earlier this year that "given the catastrophic consequences of a single attack (in the context of a nuclear weapon detonating in Manhattan), we cannot be complacent."

The lives of the residents of Manhattan may ultimately depend on the level, extent and nature of foreign military support the Iraqi Armed forces and Kurdish Peshmerga require (which must be re-evaluated as circumstances dictate) and their ability to fight with the local tribes as a cohesive force and more critically their ability to prevail.