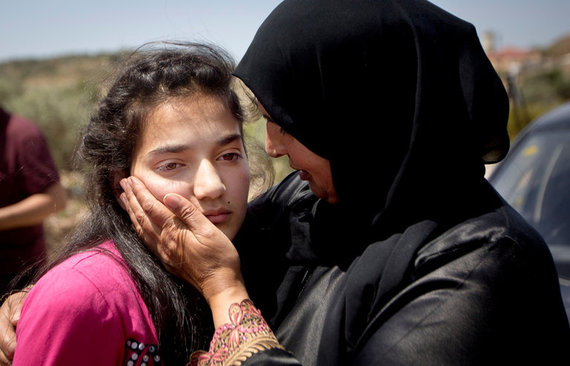 Last Sunday the Israeli prison service released Dima al-Wawi, a twelve year old Palestinian girl who had been arrested for attempting to stab a security guard at a Jewish settlement on February 9. On arriving at her hometown of Halhoul in the Southern West Bank she was received like a celebrity. Large banners were strewn all over Halhoul and Dima was escorted by a convoy of cars to her house. Over an ice cream cone (her first since her arrest) Dima told reporters that she had intended to kill the security guard she attacked and that she had "dreamt of being a martyr".

Dima is not the only Palestinian child involved in such attacks. Israel is holding four hundred Palestinians under the age of eighteen all of whom are alleged to be involved in rock and knife attacks. The youngest is Ali Alqam, eleven, accused of wounding a security guard at a light rail station last October.

As is well known, child soldiers are a tragically common phenomenon in places such as ISIS controlled territory in Iraq and Syria, Kurdistan, Ivory Coast and South Sudan. In such circumstances the norms that regulate a society have broken down and children are recruited through kidnapping, intimidation or after being orphaned. However the Palestinian situation is unique in that it is not in a state of conventional warfare that the incidence of violence by children is increasing. These are children still living with their families and have homes to go back to. They still attend school and have a semblance of a functioning community. So this raises the question, what is propelling these children to commit these attacks?

As is often the case with human behavior, there is not one but many possible answers that need to be examined.

The West Bank has been visited by violent conflict several times. It was caught between Jordan and Israel in the Six-Day war. Those who had fled to Jordan were slaughtered in their thousands by the Jordanian Army in the "Black September" civil war of 1970. It was invaded and much of Palestinian Authority infrastructure destroyed by the IDF in 2002. While living conditions in the West Bank are better than in the Gaza Strip, they are still harsh. Many areas lack adequate food supplies and malnutrition rates are high. Restrictions on using land for agriculture contribute to the sense of forced impoverishment. Meanwhile the population of Israeli settlements has grown by more than 25% since 2009. There is much to be enraged about and much that would engender a sense of hopelessness and loss of autonomy. Of living in a prison where the walls are shrinking and the warden does not care about you. However, horrific as life can be in the West Bank, this alone is not enough to move people to violence.

In order for violence to occur, and especially for children to resort to deadly violence, there must be pro-violence rhetoric along with direct and vicarious exposure to violence that ultimately makes killing a normative behavior in the mind of the child. In this, the role of Palestinian militant leadership has been central, and vile. Hamas produced a show that ran for two years on their media mouthpiece Al-Aqsa TV about a militant mouse that urges children to take up arms.

Another Hamas affiliated channel Al-Kitab telecast a children's play last Tuesday that included little boys with guns and girls with knives simulating violence against Israelis. Children are more impressionable and susceptible to such brazen propaganda. Violence is being both glorified and normalized through such harmful catechisms disguised as entertainment. There is no excuse for such depravity.

Israel must cease its bullying, stealing land and enforcing economic blockades. There can be no peace without a cessation of this state of apartheid.

However, Palestinian leadership must root out and ostracize those who seek to turn children into murderers. Acts of violence only do harm to the Palestinian people and the Palestinian cause. Global opinion has shifted enough where the emphasis can now be on political efforts to gain United Nations recognition and pressure Israel to grant true autonomy and work towards a lasting solution of the conflict.

Those who gave Dima a hero's welcome must realize that they are destroying the innocence and the future of this little girl. They are harming her more than her stay in an Israeli prison harmed her.

Dima told her mother on arriving home, "Mom, I didn't even cry once!" When her mother asked, "Not even for us?" she replied: "Only under the covers, at night."

For the love of God, spare the children.