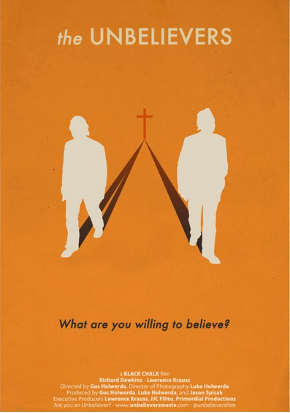 The Unbelievers is a documentary that stars Richard Dawkins and Lawrence Krauss. (It's streaming on Netflix right now!) These two scientists travel the world preaching a simple message: Science is awesome, and religion is not. If you haven't watched the trailer yet, it's worth viewing.

After watching the movie, I have some good news and some bad news. Just like the Rock's character from Fast Five, I like good news before bad news: Dessert first, then the veggies.

Creation is not primarily some distant event; rather, it is the on-going complete causing of the existence of all that is. At this very moment, were God not causing all that is to exist, there would be nothing at all. Creation concerns first of all the origin (source of being) of the universe, not its temporal beginning.

What if someone proved that the universe is eternal? Well, that still wouldn't disprove the doctrine of creation. (Aquinas, for example, thought God could have created an eternal universe.)
Saying religion and science are incompatible is
not
a scientific statement. If Dawkins says that accepting evolution means accepting atheism, that's a philosophical conclusion, not a scientific one. For an atheist with a better take on the relationship between science and religion, see
Eugenie Scott
.

Even though I have serious problems with the movie's main argument, it's worth seeing. It provides a great window into how Krauss and Dawkins think; it's cinematography and soundtrack rock.