"... if the other side isn't nuts then we can talk to them, and that is good news."
Joe McGovern, from the documentary film "The Other Side"

We are in a civil war, although one being waged with words not weapons. This conflict has been caused by differences in political perspective that are no longer seen as something to reconcile but rather as the beliefs of an enemy. It might be called "The Uncivil War."

As many as 750,000 people died in the Civil War, yet when that war was over, our nation united and became the wealthiest and most powerful nation on earth. According to Wikipedia, "Abraham Lincoln led the United States through its Civil War--its bloodiest war and its greatest moral, constitutional, and political crisis. In doing so, he preserved the Union, abolished slavery, strengthened the federal government, and modernized the economy."

It is becoming questionable whether we will be as successful reconstructing the current divisions in our union as Lincoln was in ending the Civil War.

We have lost, somehow, the ability to merge our differences over issues into solutions that are better because of those differences. We have lost the ability to use the strengths that can come from diverse perspectives and have no modern Abraham Lincoln to glue opposing views together. Today, the public leaders of each side say "we are right" and attempt to destroy their opponents politically if they can't achieve or avoid change in their own way.

"... all across America, regular people, Democrats, Republicans and Independents alike, are talking with each other and asking why our problems can't be solved in a rational way?"

In his Gettysburg Address, Lincoln said "that this nation, under God, shall have a new birth of freedom--and that government of the people, by the people, for the people, shall not perish from the earth."

We need a new birth of democracy as it was once practiced in the U.S, so our country will not morph into something less noble and more egalitarian than it already has.

Many of our leaders don't seem to know that all across America, regular people, Democrats, Republicans and Independents alike, are talking with each other and asking why our problems can't be solved in a rational way?

Two separate news items on October 26 illustrate the depth to which politics have become more important than country.

The first came in an article in the Washington Post quoting the head of the House Oversight Committee, Jason Chaffetz, who said he would spend the first two years of a Hillary Clinton presidency investigating her. "Even before we get to Day One, we've got two years' worth of material already lined up," he told the Post. "She has four years of history at the State Department, and it ain't good."

Chaffetz's strategy is contrary to a rational democracy. While presidential contests are by nature adversarial, when a winner has been chosen, the common goal has to be forward progress. The efforts of the Trump campaign to convince supporters that Clinton is a criminal combined with the new promises by Chaffetz make it clear the focus would be on taking down the opposition after the election should Clinton win, not on fixing the country's issues and repairing differences in a Lincolnesque way.

The second news item on October 26 was a tweet by Trump Campaign Manager Kellyanne Conway celebrating the FBI's decision to reopen investigation of the Clinton emails:

"A great day in our campaign just got even better. FBI reviewing new emails in Clinton probe," Conway tweeted. 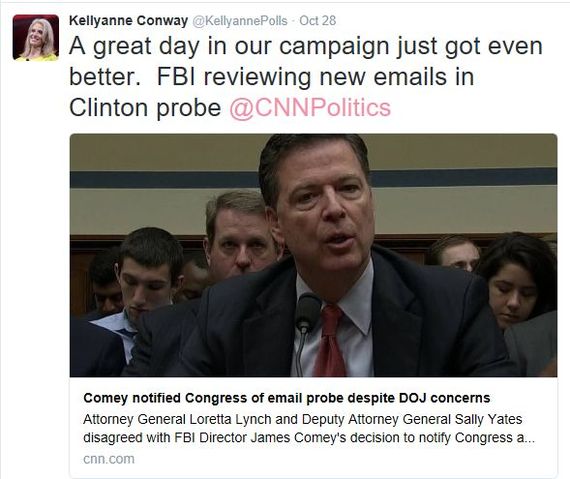 The political value to Republicans of the FBI announcement is obvious. However, no American should celebrate a potential criminal case against a former U.S. senator and secretary of state. This is not cause for defining a day as "great," This should have been a reason to express sorrow that a former secretary of state is being investigated even while gaining the same political benefit without the joy.

We really are fighting "The Uncivil War."

The two items reported on October 26 involve Republican tactics to discredit a Democrat. But there is plenty of blame to go around. From a "basket of deplorables" to other derogatory statements about the Republican candidate, Democrats have not always been civil either.

But there is hope. Joe McGovern, an actor turned film maker, has released "The Other Side: A Liberal Democrat Explores Conservative America." McGovern travels America in an old van with his dog Charlie and interviews conservatives to get beyond the talking points. He learns that "underneath the rhetoric there are good people with honest values and valid concerns" and it changes him. In his words, he becomes "a new kind of liberal who cannot only see my side's virtues and the other side's flaws, but the other side's virtues and my side's flaws. It gives me hope," he says, "because if the other side isn't nuts then we can talk to them, and that is good news."