Thirty-five years ago I recall a teacher explaining to me at school that jet airplane travel had, for the purposes of travel and trade, shrunk the world from the size of a huge beach ball to the size of a golf ball. Since then it has shrunk again and again. The world population is now well over seven billion, and our highly integrated existence therefore requires an evolution of our imagination to successfully manage global problems.

These challenges, chief of which I believe is climate change, are layered in force fields of complexity so strong that they repel easy answers or conventional problem-solving approaches. No wonder then that experts often describe climate change as a "wicked problem".

If we are to successfully navigate such complex challenges, we must first recognize some hard truths about what it means to lead in our age. As Tzeporah Berman, an environmental activist, noted at the Business Climate Summit at the end of last month, "leadership is uncomfortable, because it is about going to an edge."

The uncomfortable truth about leadership is exactly that - it requires embracing some degree of discomfort. Solutions to our complex challenges will be forged only when individuals, governments and companies put themselves out there.

Few people embody this leadership better than Christiana Figueres, the former head of the UNFCCC. She assumed the responsibility of the global climate change negotiations after the notable failure of the Copenhagen talks in 2009. Being tasked with saving the planet when we had just reached a nadir in our faith in global cooperation was an impossible challenge. But as she so eloquently explained in her TED talk this year, impossible is not a fact, it is an attitude.

Figueres' ability to successfully weave together the interests of global investors, corporations and cities with the ambitions of national governments provides an inspiring example of what can be achieved when optimism and pragmatism combine to deliver shared objectives.

As a result of her, and many other individual's, efforts, we now have a historic and ambitious global climate change agreement. That is only the first step. The hard part is how we go about achieving these ambitions.

So what can business learn from this form of leadership? It may not be the immediate instinct of corporates to embrace different new strategies, but an increasing number are recognizing the need to do so. Since the adoption of the Paris Agreement, more corporations are committing to tackle climate change. Two companies a week are signing up to set emissions reduction targets that are in line with limiting temperature rises to below two degrees through the Science Based Targets initiative, set up by CDP, the UN Global Compact, WRI and WWF.

This is no CSR exercise. Companies who participate will, with the support and guidance of the initiative, review their business strategy to see how to bring their emissions in line with the global carbon budget. It is no easy feat. But it brings many opportunities - one of these according to Sally Fisk from Pfizer is an opportunity "to continue to challenge" themselves.

Reading the quotes from the companies who are setting science-based targets reveals an implicit understanding that while it may not be simple, the payoffs for their business could be huge. Those who have signed up, such as Kellogg Company and Mars, are also calling on their peers to join them in setting targets grounded in climate science, because the payoffs for our planet will then be even bigger.

Companies setting these targets have ultimately put themselves in a stronger position to succeed, because they have understood the need to push themselves. Testing out new approaches and ideas will require some level of discomfort, but the complexities of climate change demand that we do and the resulting opportunities are boundless. There is now a rapidly building vanguard of leaders willing to go down the road less travelled. It is up to all of us to follow. 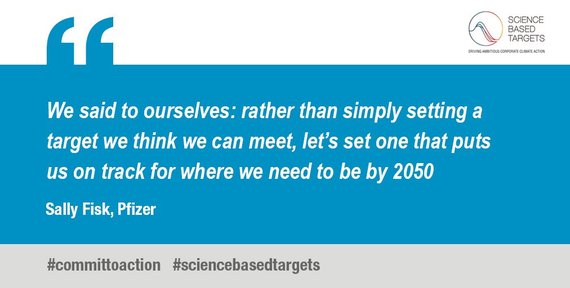