If you're not familiar with the terms sartorial contraceptive, birth control glasses and lady boner, then you're obviously pitifully unaware of fashion's latest verb going viral, man-repelling, a phrase birthed by The Man Repeller herself, Leandra Medine. After stumbling upon her blog, becoming a reader, then realizing I had subsequently referred to it countless times in my own conversations about fashion, I knew it was high time I spoke to the girl behind the glasses. This is what she had to share about being Miss Man Repeller. 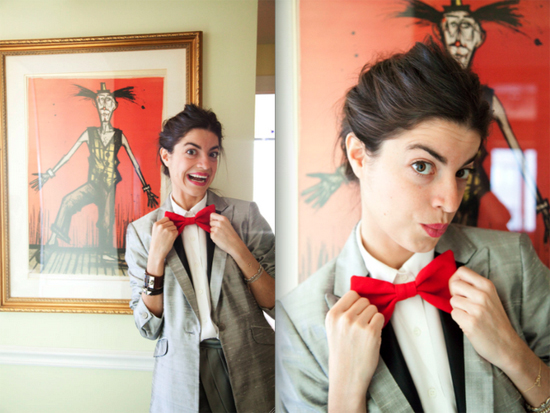 Barely a year ago Leandra Medine, a young fashion student living in New York City, thought hard about how to create a style blog that would distinguish itself from the vast sea of fashion-centric blogs flooding the web. Having been praised by family and friends for her funny and distinct voice, Medine knew she would have to do something different then the thousands of other young style bloggers, posing coquettishly for their photographer boyfriends' cameras in varying degrees of high-low ensembles, some pontificating on what little they actually knew of the fashion industry, some rambling on about their own supposedly stylishly lives, others simply happy to pout, hand on hip, designer bag dangling.

The Man Repeller is 21-year-old Medine's hilarious meditation on just how repellant much of women's fashion is to (straight) men, especially the outfits that are feted on prominent style sites like Jak&Jil and The Sartorialist. Harem pants, bow ties, large geek-chic glasses, turbans -- all man-repelling trends according to Medine. Not content with merely featuring the top man repellers from around the web, along with the best man-repelling fashion and accessories, more and more Medine is featuring photos of herself in aggressively man-repelling outfits, many of which she will teach readers how to accomplish with a step-by-step tutorial dependent on inventive layering and creative accessorizing. 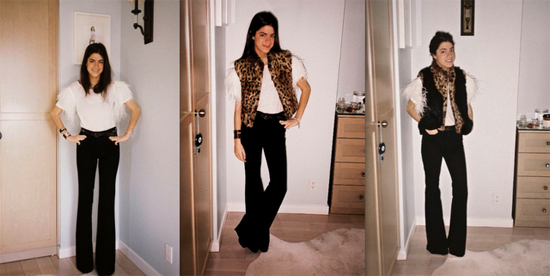 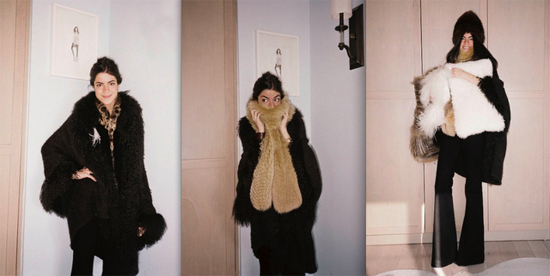 Anyone who has visited The Man Repeller knows just how refreshingly unconcerned Medine is with wearing the mantle of vanity worn by so many style bloggers today, in fact, she'd rather have giant '80s-style padding on her shoulders. But despite her entertaining musings on women's fashion and comical recreations of different man-repelling outfits, Medine did have some initial reservations with her blog's name. "I was really nervous that people were going to think I was mocking fashion, which I wasn't," says Medine earnestly. "I'm so deeply immersed in it and I love it so much, I was just addressing something that was already manifesting itself."

Indeed, the discussion of women dressing for women versus women dressing for men is not a new one. Years ago a Harper's Bazaar article compared the Versace-clad woman with the woman who dressed religiously in Prada. Not difficult to infer which type of woman was dressing for men and getting them, not difficult to see what type of clothing that entailed. Yet no one has ever articulated and more importantly curated fashion's peculiar fascination with unflattering, sexless garments and accessories the way Medine has on The Man Repeller.

In a year's time the incredibly quirky Medine has turned what could have been an eccentric, little known blog into a must-visit site that defined a trend before fashion heavyweights could pin it down. She has been written about in The New York Times, Harper's Bazaar, various international editions of Vogue, the Wall Street Journal, Women's Wear Daily and in many, many more print and online publications (see the full list here.) She has over 20,000 followers on Twitter and over 8,000 'likes' on her blog's Facebook page. She covered New York Fashion Week ("like summer camp, but more hectic") this past season for New York Magazine's The Cut and popular online fashion retailer Shopbop. She's got a number of designer collaborations in the works, and of course, like any popular style blogger, is getting sent a lot of things for free. How did it happen, and so fast? 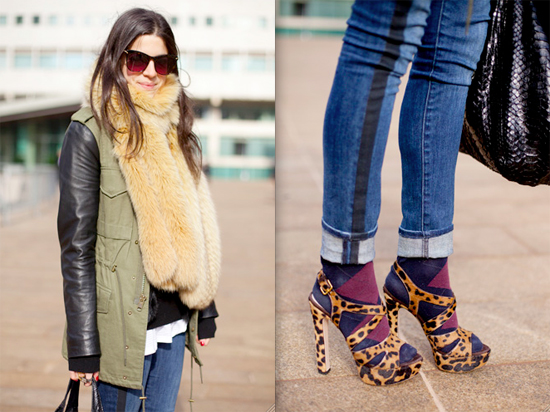 Medine is quick to credit the power of social media for her blog's popularity, her own newfound dominance in the blogging hierarchy and the various opportunities for collaboration that have quickly come her way. "It's made the internet accessible for everyone [and] it's given people the opportunity to become someone for no reason," says Medine. "'Who the hell am I?' I'm no one, I'm just a girl who wanted to blog... but because of Twitter and Facebook I was able to connect with PR people at huge brands and different publications." Laura Brown from Harper's Bazaar found Medine on Twitter and commissioned her to write an article for the magazine entitled "Can You Be In Fashion and Still Get A Man?" Fashion designer Rachel Roy found Medine on Twitter and they are now collaborating. Irina Aleksander from The New York Times wrote "Fashion Triumph: Deflecting the Male Gaze" about Medine after she heard about her through women at Vogue who had started following Medine on Twitter. As Medine enumerates these milestones she comes to the full realization that Twitter has been the real key to her success. "This is the first time I'm expressing it, verbalizing it, I'd never really made the connection before but yes, everything that's happened has pretty much been from people finding me through Twitter. Twitter has been the foundation for everything."

If her rapid rise to blogging fame has affected her unusual man-repelling charm it's not evident on her blog and certainly not during our conversation. I ask her whether she feels obligated to feature the freebies being sent to her by PR companies and fashion labels and she insists she does not. "Most of the time people send me things deliberately that are man-repelling, so I would feature them anyway. It just gives me more content which is nice and relieving so I don't have to go shop. I don't want my readers to think that I'm in it for the free goods." Monetizing a site is always an issue for bloggers, and many choose to feature items from online retailers, getting paid for the number of clicks on the links to the online stores. Advertising banners are also ubiquitous. Medine has done both with her site, but none of it seems disingenuous -- she has managed to keep it all "on-brand," as she says.

Another rewarding perk of Medine's online popularity is that it has translated into real life, most often on the streets of downtown New York City. "When I'm in SoHo on a Sunday I get stopped a lot, it's really fun and I really like it," says Medine with genuine enthusiasm. Young women are quick to praise her humor and originality on the site, some could even be considered devoted fans. "Sometimes people recite things back to me from my blog," says Medine, "I'm like, 'you're quoting me, that's huge!'" At high street shopping mecca TopShop a woman asked Medine if she was the author of The Man Repeller. Medine confesses, "it was the first time I had been referred to as an author and I was like, 'well yes, yes I am.'" 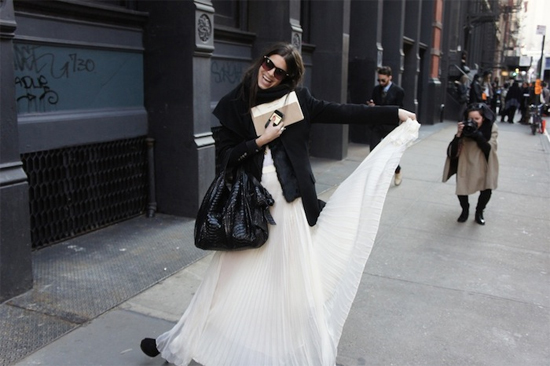 Millions of hits, thousands of followers and handfuls of man-repelling fans aside, Medine is still happy living in her parent's Upper East Side apartment. I tell her that living with her parents is actually quite fitting for a master man repeller such as herself and she laughs, considering this for what sounds like the first time. "It's very easy to be at home, I have a good relationship with my parents," explains Medine, but I know there is another facet to this amiable living arrangement. "There are so many things in my closet that belong to her [my mom] I'm not sure I could give up leaving those things here and going to another space!"

As our conversation comes to a close I can't help but tell Medine how surprised I am that talking to her is exactly like reading her blog, there is no disconnect between the outspoken, adjective-laden, contraceptive-referencing narrative on The Man Repeller and how Medine communicates in real life. More than just refreshing to hear, it's nice to know that she lacks the artifice other style bloggers and fashion types all to often adopt. She tells me she has heard this before. "I was on the phone with the PR girl from Michael Kors, we were talking about collaborating for something and she was like, 'oh my God, so you are the same as on your blog!' And I'm like 'yes, yes I am. The crazy never turns off.'" 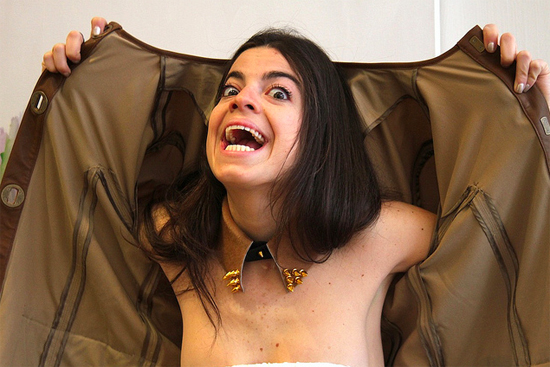 Whether or not you want to call her crazy, there's no denying that Medine is one smart man-repelling young woman. She was the first to articulate a major trend in fashion and has hit such a nerve that "man-repelling" is a bonafide phrase in the fashion industry lexicon. She has been featured in many of the world's most respected and widely read publications, and has enough business acumen at 21 to collaborate with others and monetize her site in a way that doesn't turn off readers. I ask her what we can expect from her in the future and besides more collaborations that are "brewing" but which she can't speak about, she does tell me to "look out for my thick eyebrows on the cover of a book." Success aside, she remains realistic about her future in fashion. "I'm not sure this blog could be profitable enough for it to be full time," says Medine seriously now. "After I graduate college I'm definitely going to start looking for proper 9-5 jobs, probably still in the realm of web, editorial, social media, fashion, things like that." I ask if a new job will mean the end of The Man Repeller. "No, of course not! The Man Repeller will never die. Unless of course, I die."

In this digital age, when even 15 minutes of fame seems a generous allowance, Medine appears poised to translate her blog's success into a promising career with legs. Lime green, harem pant-wearing legs perhaps, but legs nonetheless.

Want to know what the top 3 man-repelling pieces in Medine's closet are? Her favorite magazines and blogs? Her picks for best spring/summer trends? Click here to find out.


All photos courtesy of The Man Repeller.

Marissa Bronfman writes about style, entertainment and travel from around the world. Find more from her on www.marissabronfman.com and her blog.