In case anyone hasn't noticed, Arizona Senator John McCain has been making a fool of himself lately, on a weekly if not daily basis, his rants seeming to be fueled by an unhealthy mix of anger and envy, with not insignificant hints of racism and misogyny thrown in for good measure. The direct, and at times indirect, object of his rage has been President Barack Obama, who beat McCain substantially in the 2008 presidential election and who had the gall to be reelected by a significant electoral margin again this month--much, apparently, to McCain's chagrin. 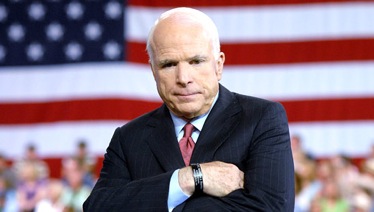 McCain has never liked Obama. Ever. Their feud goes back to Obama's first years in the U.S. Senate, when McCain felt that Obama betrayed him over lobbying reform legislation. It resulted in a scathing letter issued to Obama (and reportedly drafted by McCain's then alter-ego Mark Salter) in February of 2006:

I'm embarrassed to admit that after all these years in politics, I failed to interpret your previous assurances as typical rhetorical gloss routinely used in politics to make self-interested partisan posturing appear more noble...I understand how important the opportunity to lead your party's efforts to exploit this issue must seem to a freshman senator, and I hold no hard feelings over your earlier disingenuousness.

Their relationship--as became clear during the 2008 presidential contest--has been icy ever since. Last month McCain angrily accused Obama on "Fox and Friends" of taking "snarky cheap shots" at Mitt Romney during their third presidential debate over foreign policy issues. " I never did that to the community organizer about his experience back in 2008," McCain declared. "Maybe I should've, although I never would've."

Aha, the "community organizer." Apparently Senator McCain would like us to forget that in his first debate with his Democratic opponent, in Oxford Mississippi, he refused even to look at Obama. And that at the second debate, in Nashville, Tennessee, he indignantly referred to Obama as "that one!"--pointing at him derisively. It was, to put it mildly, issued in an ugly and thoroughly disrespectful tone. More to the point, McCain very clearly stated that:

Obama was wrong about Iraq and the surge. He was wrong about Russia when they committed aggression against Georgia. And in his short career, he does not understand our national security challenges. We don't have time for on-the-job training, my friends.

He did precisely what he said he didn't do. And of course that series of presidential debates took place while McCain's running mate was charging that Obama was "pallin' around with terrorists" and that he "is not a man who sees America the way you and I see America."

But because McCain was pontificating inside the Fox echo chamber, no one called him on his staggering distortions and duplicities.

Moreover, since his contentious 2010 campaign for reelection in Arizona, McCain has headed on a decidedly starboard tack, and an erratic and bitter course at that. As Joe Hagan noted in a superb profile of McCain two years ago, his persona has become that of a "grenade about to detonate."

McCain's more recent attacks on the Obama Administration's response to the September 11 attack on the U.S. diplomatic facility Benghazi, in general--and on United Nations Ambassador Susan Rice, in particular--have taken him to the dark edge once again. On Fox News, McCain angrily attacked Rice and even threatened to thwart her possible appointment as Secretary of State:

Susan Rice should have known better and if she didn't know better, she is not qualified. She should have known better. I will do everything in my power to block her from being the United States secretary of state. She has proven that she either doesn't understand or she is not willing to accept evidence on its face....She went out and told the American people something that was patently false and defied common sense.

The assault on the American diplomatic facility in Benghazi was a complicated affair. In spite of McCain's unqualified assertions, all of the facts are not yet in, and were not in when Rice made her remarks on the Sunday morning talk shows five days after the tragedy in Benghazi. The Washington Post's "Fact Checker" Glenn Kessler has done an admirable job of sorting out those facts, at least as they are now reported, and placing them in a comprehensible timeframe. He has come to the conclusion that Rice was simply restating CIA talking points in her comments on the attack. Moreover, he issued McCain "two Pinnochios" for his volatile "mischaracterization" of Rice's remarks.

Then, of course, McCain missed a congressional briefing on Benghazi in favor of holding a press conference in which he called for a Watergate-styled Senate "select committee," bashing Obama at every turn. It was nothing more than a publicity stunt; his select committee recommendation is going nowhere. Not even his closest friend in the Senate, Joe Lieberman, bought McCain's recommendation, stating that the situation didn't "rise to the level" of McCain's assertions.

Indeed, the false equivalency of McCain's Watergate comparison borders on the criminal. And when a CNN reporter asked McCain why he missed the congressional inquiry on Benghazi, McCain angrily lashed back at him that he's not "going to comment on how I spend my time to the media" and "who the hell are you to tell me" how to respond to such questioning.

Congressional women lawmakers have rightfully circled their wagons around Rice. Representative Marcia Fudge (D-Ohio), the incoming chairwoman of the Congressional Black Caucus, pointed out that conservative critics of the Obama administration "have never called a male unqualified, not bright, not trustworthy. There is a clear sexism and racism that goes with these comments being made by...Senator McCain and others."

Representative Gwen Moore (D-Wisconsin) added: "To batter this woman because they don't feel they have the ability to batter President Obama is something we the women are not going to stand by and watch. Their feckless and reckless speculation is unworthy of their offices as senators."

At his press conference last week, Obama was even more direct, characterizing McCain's effort to "besmirch [Rice's] reputation" as "outrageous."

Not deterred by the growing criticism, yesterday McCain doubled-down on his assault on Rice, this time on CBS's "Face the Nation," stating that Rice needs to "[come] back on this show and [say], 'I was wrong. I gave the wrong information on your show some several weeks ago.' .... [S]he has a lot of explaining to do, and I'm curious why she has not repudiated those remarks."

McCain's call for an "apology" doesn't pass the straight-face test, especially coming from someone who has rarely admitted he was wrong during a long and checkered political career (from his role in the Keating Five scandal onward)--and for which he has never issued the slightest mea culpa about his vice-presidential selection four years ago.

That there are significant questions that still need to be answered in respect to the Benghazi attack goes without saying. But McCain's anger-driven grandstanding brings us no closer to the light.

As McCain insiders have noted for some time--and, for my book, The Lies of Sarah Palin, I interviewed many of his longtime associates, both on and off the record--there have always been two John McCains. One is the avuncular, fun-loving McCain who guided the Straight-Talk Express with a pirate's patch over one eye in the 2000 Republican presidential primary; the other is the brooding, mean-spirited curmudgeon who has come to define his persona ever since his loss to Obama in 2008. Think Ahab in an ill-fitting suit. "McCain can be an absolute asshole," one of his advisers told me two years ago. "There's no escaping that."

Given his profound antipathy toward Obama, it's the latter John McCain that has dominated what will surely be his final term in the U.S. Senate. He's become a bitter, petulant bully, with nothing left to lose, except, apparently his personal dignity and what is left of his political reputation. Which is too bad. It was the bipartisan, independent maverick that first catapulted McCain to national prominence. Today, it is the ever more conservative and impulsive party hack that promises to stain his legacy permanently.

Unfortunately, this is also the same John McCain who appears virtually every Sunday morning on the network talk-show circuit, launching attacks on President Obama and his associates. It's a poor choice by the networks for a dance partner. McCain's anger-driven, personalized, caustic, and often fact-free ramblings do little to advance this country's cause, either at home or around the world.