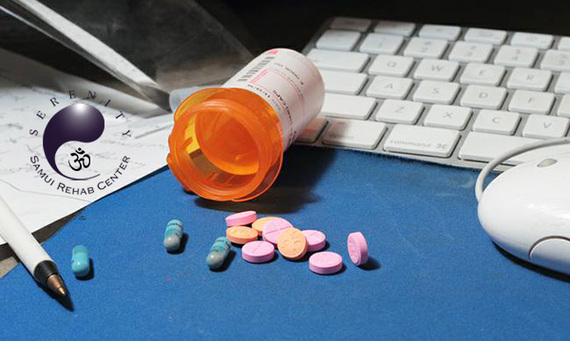 Amber was out of control. She knew she should stop. But her intense lows -- after that feeling of invincibility wore off -- made her feel like she was being slowly crushed by a truck. And the promise of her highs was so great that it didn't matter how many times she'd told herself she was done for good. Sitting at her dorm-room desk yet again, she placed three round pills on a fresh piece of white computer paper. She used the flat bottom of a lighter to smash them into a candy-blue powder. With her ATM card, she pushed the fine dust into a straight line. Then, in one inhalation through a snipped plastic straw, she snorted 60 milligrams of Adderall up her nose.

Amber (a fictional composite of several people) is never what I envisioned when I started prescribing stimulant drugs like Adderall and Ritalin to treat attention-deficit/hyperactivity disorder (ADHD) in kids more than 37 years ago. I am a pediatrician and family therapist, specializing in development and behavior. I have worked with more than 3,500 children and their families in my private practice in Walnut Creek, California, a middle and upper-middle class suburb, 24 miles due east of San Francisco.

I wrote my first prescriptions for stimulants in 1978, when ADHD was still called hyperkinetic reaction of childhood -- a disorder confined, at the time, only to children. And for years, I had to practically beg parents and teachers to even consider using amphetamine and related drugs for children whom I believed would greatly benefit from the drugs. My feelings started to change in the early 1990s, when I noticed a shift in the kinds of patients showing up in my office for appointments. In addition to the usual elementary-school boys who were struggling with impulsivity and hyperactivity in class, I was now getting visits from children younger than 6, teenagers, more girls and kids with far less impairment in general. Then, parents of the children I was seeing began asking me if they, too, had ADHD.

The notion that adults could even have the disorder was still very new. It had also been decades since doctors had prescribed stimulants to adults, and because that diet-driven trend had caused its own wave of addiction in the 1970s, older doctors who remembered that troubled period wanted nothing to do with the drugs. This time, it instead fell to behavioral/developmental pediatricians and child psychiatrists like myself to tentatively begin to treat adults with medication for attention problems.

I was part of the first group of doctors to prescribe to adults, but I was never completely comfortable with my role. After I published an article in a bioethics journal in 1996 about an alarmingly rapid rise in Ritalin use, the New York Times cited my work in a story about the growing use of medication to boost performance, even in children who met a greatly broadened set of criteria for ADHD. My book Running on Ritalin followed in 1998.

Although Running on Ritalin focused on children's behavior and performance, it included a chapter about the very first crop of adults then considering ADHD as a diagnosis and Ritalin as a treatment. The first chapter of Running on Ritalin closed with what would prove to be an ominous prediction:

"As competition on every level intensifies, our preoccupations as a culture increasingly center on performance. And our children, whether we realize it or not, have been serving as a proving ground for the premise of medicating to enhance performance. Are we likely to see a time in the not-so-distant future when a large part of America will be running on Ritalin?"

That time has come. Today's ADHD drug of choice is Adderall, not Ritalin. And it's no longer just kids with a behavioral disorder using these drugs to function in society. Now, it's older teens and adults who are fueling an emerging epidemic of abuse and addiction. The not-so-distant future is here: We are living in the United States of Adderall.

Amber knew before she even started college that she wanted to be a doctor, and she was working hard in her pre-med classes at Santa Clara University. But the course load was challenging for her, and by her second semester, she was struggling. She'd scored a B- on her first organic chemistry test, despite pulling several all-nighters to prepare. So, when a friend offered her one of his Adderall pills during a late-night studying session, she didn't hesitate. "That night, I took it for the first time to study for exams, and man, I remember feeling like I've never felt before," says Amber, now 21 and in her fourth year of college but still technically a junior, given all the failing grades and dropped classes. "Just feeling fucking amazing, flying high as a kite. So from then on, I would take it only on occasions where I really needed to study for exams."

At first, Amber was swallowing one 20-mg pill, once every week or two -- far less frequently than what a typical prescription dosage would be for a young adult being treated for ADHD. It didn't take long for her to feel like she needed the drug -- and not just to study.

"About a semester later, I got my hands on some Adderall from a friend of a friend," she says, looking at the floor, speaking quickly, barely pausing to take a breath. Sitting across from me with lean arms folded across her chest, she crosses one leg over the other. Her dangling foot fidgets, up and down, up and down.

"I found myself popping it more frequently for school. It became a crutch. Then I would pop some before work. Then, after work. Then, when I went to hang out with my friends. Next thing you know, I'm literally popping up to 120 mg in a day to chase that Adderall high that I love more than anything, even more than myself. I now have to take high doses every day just to feel normal. My boyfriend has to put up with my irritability, my close-to-nothing appetite, everything that this drug is sucking out of me. Yet I can't stop. I don't care to stop. And I don't want to stop."

No one knows exactly how many people there are like Amber, but accumulating evidence suggests that she is one of millions of Americans engaging in the unsupervised and illegal use of Adderall and other prescription stimulants, including Ritalin and Concerta, and one of hundreds of thousands who are misusing, abusing and becoming addicted to these drugs. And their ranks appear to be growing -- alongside an explosion in diagnoses for ADHD in the U.S. over the last 20 years. It's a tenuous correlation, as most addicts like Amber never would have met the diagnostic criteria for ADHD in the first place. Nevertheless, today's epidemic of Adderall addiction began -- or at least began to escalate -- around 1996 with a boom in prescriptions for people who were long past the sitting-still-in-school stage. From there, ADHD rapidly transitioned from a disorder of children to an affliction applicable to all. By 2012, doctors were, for the first time, writing more stimulant prescriptions for adults than for kids.