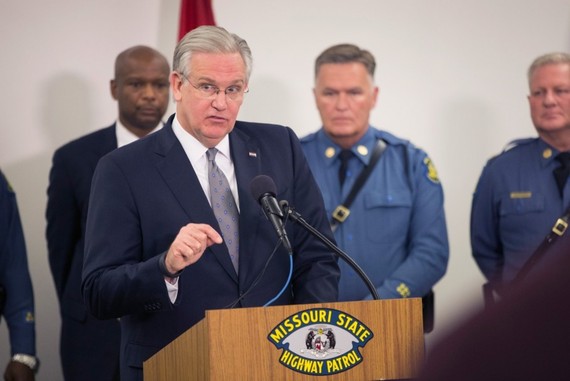 If the life, death, burial, and resurrection of Jesus Christ does anything, it brings shaky, fearful, immoral leadership into sharp relief. Just after his birth, a “frightened" King Herod searches for the child in order to "pay him homage." The narrative later reveals that the puppet king simply wanted to murder the baby in order to make sure there was no competition for the title of "King of Israel." The Magi, in their wisdom, pick up on Herod’s power-induced paranoia and do not return to Jerusalem after offering Jesus their gifts of gold, frankincense, and myrrh. Upon the Magi’s departure, a messenger of God warns Joseph to take his fledgling family and flee to Egypt until Herod’s reign comes to an end. Subverting the powers that be, the holy family departs for Egypt, remaining their until Herod’s death.

In our own time, we are learning more and more about the desperate, paranoid tactics of the Federal Bureau of Investigation. Just last week, The New York Times released an uncensored letter from the F.B.I. to Martin Luther King, Jr. encouraging the civil-rights prophet to do the “one thing left for you to do. You know what it is.” The Georgia-born pastor did not do that &ldquoone thing” and ended up spending the next three years of his life continuing to advocate for the social transformation that threatened the national status quo. Shaky, fearful, immoral federal leadership did not work then and will not work now.

Just this week, on Nov. 17, 2014, Jay Nixon, Governor of Missouri, declared a state of emergency ahead of the impending grand jury announcement regarding whether Officer Darren Wilson will be indicted for the shooting death of Michael Brown, an unarmed black teenager, in Ferguson. Citing the “possibility of expanded unrest,” Governor Nixon has joined the likes of King Herod, William Sullivan, and J. Edgar Hoover in the tradition of exhibiting shaky, fearful, and immoral leadership in the face of magnified social pressure. In declaring a state of emergency before any actual announcement by the grand jury, Nixon is shedding a valuable light on what happens when a culture of fearful white supremacy can’t tolerate dissent, disorder, or difference. In declaring a state of emergency, Nixon is adding himself to the ranks of incompetent leaders who find solace not in bringing justice to the masses but in furthering division and suspicion.

In declaring a state of emergency, Nixon is saying, once again, that the lives of black people are expendable, dispensable, and disposable. Deeper than Gov. Nixon’s declaration, though, are forms of American Christianity that have championed the dehumanization of black lives. During and before the Civil War, ministers of varying denominational affiliations used the Bible to justify the institution of chattel slavery. During the 1950s, similar arguments were used to promote segregation. And so, in this vein, Gov. Nixon has, in effect, declared that the prospect of black people protesting on the streets of Missouri is more dangerous than the prospect of an unarmed teenager being killed by the very ones who have vowed to protect and keep the peace. What will the church do in the days, weeks, months, and years to come? Will we sit idly by while modern-day Herods use totalitarian tactics to prevent nonviolent demonstrations? Will we place our lives on the line in order to show solidarity with society’s most vulnerable? Will we, empowered by the Spirit, go to the lynching tree with Jesus, receiving the execution prepared for those who love justice? We must resolve, in these United States of Emergency, to announce, with loud voices, “The only emergency is the rate at which black lives are being lost to bloodthirsty police.”