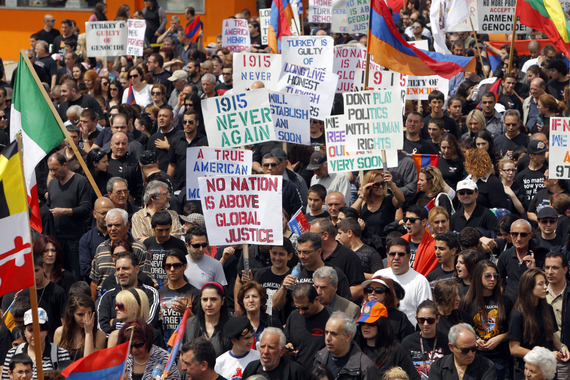 A bipartisan resolution calling for the United States to formally recognize the Armenian genocide was introduced in Congress on March 18, 2015. The following Congressional press release highlights the urgent call for America to finally use the word "genocide":

This year, 2015, marks the 100th anniversary of the Armenian genocide - a systematic and deliberate annihilation campaign launched by the government of the Ottoman Empire against its Armenian population which left 1.5 million Armenians dead and millions more displaced. While the Armenian genocide has been recognized by more than twenty nations including Canada, Italy, Sweden, France, Argentina and Russia, as well as the European Parliament, it has not been formally recognized by the U.S. Congress in decades and has not been recognized by President Barack Obama.

"As we recognize the 100th Anniversary of the Armenian genocide, we remember the one and a half million Armenians who were slaughtered by Ottoman Turks," said Rep. Frank Pallone. "Now is the time for the United States government to do the moral thing and recognize these atrocities for what they are--genocide..."

Like clockwork, Turkey threatened serious repercussions to its military and political relationship with the U.S. if the resolution was adopted by Congress.

As a result, the United States has officially refrained from using the word "genocide." While Pope Francis recently referred to the slaughter as "the first genocide of the 20th Century" and U.S. Ambassador to the UN Samantha Power wrote a landmark book on the subject titled A Problem From Hell (chronicling America's response to the Armenian genocide, the Holocaust, and other 20th Century genocides), the U.S. federal government has yet to officially use the term. This state of affairs runs contrary to the U.S. Holocaust Museum's reference of Adolf Hitler's infamous quote, "Who, after all, speaks today of the annihilation of the Armenians?"

Ultimately, the current political turmoil directly contradicts the words of Dr. Raphael Lemkin, the man who created the word "genocide." If anyone ever doubts whether the slaughter of Armenians constitutes genocide, Raphael Lemkin can be seen in a legendary television appearance describing his desire to create a new word defining the planned annihilation of an entire nation. As stated in a New York Times review of a documentary on the subject, Lemkin's words in his 1949 CBS appearance highlight the link between the murder of Armenians in WWI and Jews during WWII:

The film includes a clip from a 1949 CBS interview with Raphael Lemkin, a law professor who in 1943 coined the term genocide. "I became interested in genocide because it happened so many times," he tells the CBS commentator Quincy Howe. "First to the Armenians, then after the Armenians, Hitler took action."

Lemkin states clearly in the interview that genocides "happened so many times" and specifically "to the Armenians, then after the Armenians, Hitler took action."

Therefore, if the man who coined the term "genocide" is on tape stating verbatim that it happened "to the Armenians," why on Earth can't the United States formally recognize the Armenian Genocide?

U.S. Ambassador to the UN Samantha Power and many others have chronicled the life of Raphael Lemkin in order to gain a better understanding of why he felt compelled to coin the phrase. Whether it's the British historian Sir Martin Gilbert in America and the Armenian Genocide in 1915, Israeli historian Yehuda Bauer in On the Holocaust and other Genocides, or a recent documentary titled Watchers of the Sky, historians around the world acknowledge the legitimacy of both the Armenian genocide and Raphael Lemkin's link to the Armenian experience. According to Duke University in The Man Who Criminalized Genocide, Lemkin was deeply moved by the Armenian experience:

As a twenty-one-year old linguistics student at the University of Lvov, Lemkin learned of the case of a young Armenian. The Armenian had been charged with assassinating a former Turkish interior minister, an official who had set out to rid Turkey of its Armenian "problem," igniting a campaign that reportedly brought the deaths of a million people. Lemkin asked his professor why the larger crime had gone unpunished. The professor said there was no law under which the chief perpetrator could be arrested...

A decade later, in 1933, Lemkin, by then a public prosecutor in Warsaw, wrote a paper for an international criminal-law conference to be held in Madrid, drawing attention both to Hitler's ascent and to the slaughter of the Armenians. If it happened once, he argued, it would happen again. If it happened there, it could happen here.


Lemkin used his knowledge of the slaughter of the Armenians to warn Europe about the impending Holocaust. After World War Two, he worked tirelessly to implement the UN's first human rights treaty: The Convention on the Prevention and Punishment of the Crime of Genocide.

While some might try to promote a revisionist history stating it was simply a massacre, nobody doubts that Raphael Lemkin viewed the murder of Armenians as a genocide.

Finally, a 1948 lecture by Dr. Lemkin at the United Nations highlights a gruesome summary of peoples who experienced genocide, including the Armenians:

Whether the victims were called Huguenots, Waldenses, early Christians, Jews, Christian Assyrians, Armenians, Poles, Gypsies, Slavs of different nationalities, whether the attack was directed in the dark Middle Ages or in our own enlightened times, there have always been two tragic questions. Are these people crying for help entitled to international protection, and, if such protection comes, does it interfere with the right of a state to do whatever it pleases with its own citizens?

Thus, Lemkin was always the most vocal figure of his era regarding the issue of genocide, and the slaughter of the Armenians was always at the forefront of his memory. Those who advocate a "debate" in regards to the legitimacy of the Armenian genocide ignore the fact that there was never a debate in Lemkin's mind. He created the word "genocide" because of the Armenians and the many others who were victims of humanity's greatest crime.

As English journalist Robert Fisk writes in The Independent, there's "living proof" of the Armenian genocide ignored by President Obama and former Secretary of State Hillary Clinton. Today, the world is still engulfed in this unimaginable evil primarily because politics has come before our value system. While we rightfully condemn the genocidal acts of groups like ISIS, the United States should never refrain from correctly acknowledging historical record; even at the expense of a geopolitical relationship. One hundred years ago, the murder of Armenians influenced a young Polish Jew named Lemkin to create a new word in the English language. America should not only honor the memory of the one and a half million Armenians murdered, but also the legacy of a man who championed an issue faced by many even today.

This word should be used by President Obama to describe the slaughter of Armenians under the Ottoman Empire, regardless of the eventual threats by Turkey, or the political repercussions from the simple act of acknowledging genocide. Once the phrase "Armenian genocide" is used by our president and Congress, the world will know that America has put cherished values above political expediency. Our friends and enemies too will know that we've turned a page in our history, and learn that genocide will never be accepted by the United States of America, regardless of any geopolitical concerns or strategic relationships.