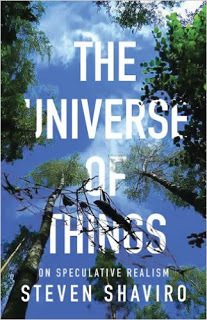 Eric Schliesser quotes from the book he is reviewing, Steven Shaviro's The Universe of Things: On Speculative Realism ("Throwing caution to the wind," TLS, 6/26/15) thusly, "our very experience of the world can take place only under conditions of our own making."

The quote refers to a philosophical theory called "correlationism." But no matter. Every once in a while a concept in philosophy whether it's analytic or metaphysical can catch you up short. You think you know what it means and yet you don't. However, you still can't get the phrase out of your mind. It's like being punched in the stomach. The lack of comprehension winds you in a good way and makes you want to fill in the blanks. If one were an academic philosopher rather than just an itinerant reader of the TLS which regularly covers tomes of philosophy in way that comparable journals in America (The New York Times Book Review, The New York Review of Books) don't then one would know where the sentence is coming from and naturally be able to look at the whole thing contextually. Yet a little bit of knowledge can be a dangerous thing and in the case at hand ignorance may turn out to be bliss since it leaves one haunted by the mysterious line with its dauntingly poetic epistemology. You can just see a seminar table full of Oxford dons smiling indulgently at the cave dweller trying to parse the shadows of ideas he knows little about as they flit across the scrim of consciousness. You might be tempted to call up your grad student friend at NYU and get the real deal. However sometimes a rose is just a rose. It's almost nicer to relish the world of implications and irresolution that reside in Shaviro's uncanny proposition.