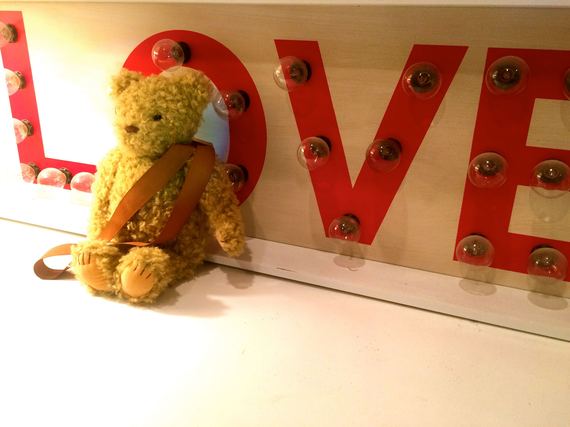 Our Moldovan boy's Teddy Bear surfaces periodically. This week I found it lying on the playroom floor among our daughters' dress up costumes.

Years ago, my husband, Mark, and I were trying to adopt a child from Moldova and our adoption agency told us to buy a transitional object for the three year old boy living in an orphanage, who was likely to become our son. I chose this particular teddy bear because it had a pocket on its back, where a laminated photograph of Mark and I could be stowed. The bear had straps and I imagined that it would be worn across the little boy's chest in the orphanage. I had hoped he would wear it like a talisman against despair.

The bear was to let him know that we were coming soon to bring him home to the United States of America. One day the teddy bear would lie under the covers of our son's bed, in the bedroom we had already decorated in New Jersey, becoming more grubby and treasured as each year passed.

That was more than a decade ago. That Moldovan boy that we dreamed of is a teenager now, if he is still alive, but he never got to hold this bear.

We were never actually matched with a particular child in Moldova, but I felt we were destined for a boy who grew clearer in my imagination, like a photograph coming to life in a dark room. I scrolled through many pictures of children in orphanages in Moldova. I prepared myself for a small, skinny, sallow skinned child, possibly with knock knees, whom I would love back to health.

We waited for almost four years. Frequently we were told we were about to be matched with a child, and that we would be sent a picture of our three year old son soon. But then we would discover that something had inexplicably gone wrong, such as the Moldovan adoption committee dissolving, and we would have to wait for a new committee to be formed, while our lives remained in a sort of twilight zone.

Outdated laws, bureaucracy, corruption and carelessness, leaves millions of children stranded in neglect and squalor in orphanages while thousands of parents like us wait with our hearts breaking like rafts at sea, barely held together with irrational hope and fear. We lived for years waiting for phone calls and e-mail updates as if they were lifesavers, only to wind up often sinking in a sobbing heap. I pictured the lonely child, with yet another night with no one to tuck him in to bed, hug and kiss him, and whisper "I love you". Every day, I railed against a world that created such cruelty, poverty, war and misery that allowed for orphanages, where daily the children became more at risk of irreparable damage.

There are over seven million children stuck in orphanages worldwide, which is why I volunteer now with Kidsave International, a non-profit that works to help these forgotten children find loving families.

In the end, we were too broken and exhausted to continue waiting for our Moldovan boy. I often wonder though, where he is now, and what became of him. Statistically, due to neglect and institutional living in Moldova, one of the poorest countries in Europe, he has suffered a lack of brain development, serious health issues -- psychological, emotional and physical. When he ages out of his institution in the next couple of years at 16, he will be at high risk of becoming a slave in sex trafficking, or hopelessly involved in crime, addiction, homelessness or prison.

He may never have felt love, or even imagined the warm furry bear pocket with the picture inside of his waiting parents.

We finally adopted two of our children from New York when they were infants, and our third daughter came home from Colombia when she was thirteen. We painted the green walls of our Moldovan boy's bedroom pink, and our daughters are blissfully unaware of his unfulfilled life with us.

Our daughters have never been all that interested in this bear. It simply exists among the many toys my children have, a silent reminder for me of that little boy.

No child has ever played with it.

Perhaps the Moldovan boy's Teddy Bear carries some sadness, or possibly I didn't choose the perfect bear after all. Today, I'll put him in a drawer again, because despite the terrible weight of this small bear's baggage, I can never bring myself to throw him away.

Voting Made Easy
Register to vote and apply for an absentee ballot today
Register now
More:
ParentsAdoptionorphanagesParenting
Newsletter Sign Up
Raise the kind of person you'd like to know
Subscribe to our parenting newsletter.
Successfully Subscribed!
Realness delivered to your inbox