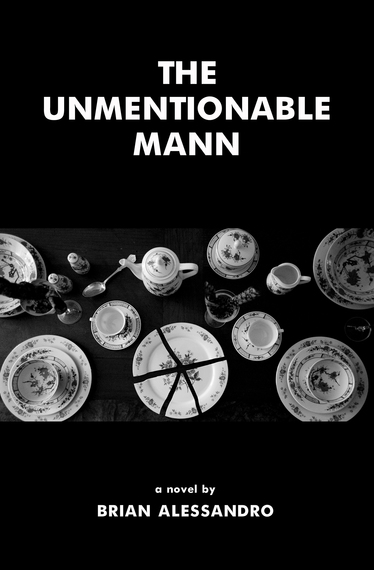 The Unmentionable Mann by Brian Alessandro is a psychoanalyst's vision realized. It's the story of the deluded, affluent, white supremacist Mann-Schiller family, who engage in incest to protect their bloodline. You can tell that Alessandro cares a great deal about his characters, even if they are themselves sometimes lacking in empathy. Perhaps it's best to start with what this novel is not. It is not a novel for the squeamish -- there are scenes involving incest, coprophilia, extreme sexual violence and torture. It's also not the kind of book you want to read if you're looking for a pleasurable escape. The dramatic action is often difficult to stomach, and the symbolism is of an unusually grimy variety.

Nevertheless, the writing has a way of ensnaring the gay male reader as it probes the darkness of the gay world, "a place full of shame and pain." The narrative revolves around the fantasies, pathologies and hopes of Zachary Mann, the adolescent son of Katherine and Victor Mann and a victim of the latter's brutal experiments designed to eradicate their child's unmentionable desires. Yet it is Zachary's lover, Anand, who earns the reader's full empathy, and one only wishes that Alessandro had made the Indian-American teenager the centerpiece of the story. Anand, like Zachary, is a victim of his family's desperate effort to exorcize him of his homosexuality. Both suffer from the pain of abandonment, sadomasochistic tendencies, the psychosis of racism and the shame of aberration. Both desire a deep love and intimacy to salve the wounds of childhood traumas. And both continuously project their fears and hatreds onto one another. Yet Anand proves to be the more empathetic of the two, a considerable achievement in a world where too many gay men have descended into nihilism, seeking -- as Zachary does -- to destroy "precious things" and people. Here God doesn't exist, nature is valueless and morality a mere "matter of opinion," as the Manns' sage West Indian butler observes. Where Zachary delights in objectifying, abusing, humiliating, orientalizing and vanquishing other men, Anand experiences a pang of conscience after lashing out at his oppressors. He searches for the transcendent and true love at the same time he resists the shallowness, pessimism and predatory habits of the community. Where the Manns can only ever characterize compassion in a self-interested way, Anand ultimately finds a way to forgive his parents.

There are times when Alessandro's storytelling feels disjointed, his adolescent characters' manner of speech too stylized and his own portrayal of people of color too exoticized. But his keen insights into the many neuroses of gay male urban culture invite the reader to reflect on its darker aspects, the things we instinctively cover up to appear respectable in the eyes of heterosexual society. The storytelling challenges, illuminates and tantalizes all at once, which is what good storytelling is meant to do.