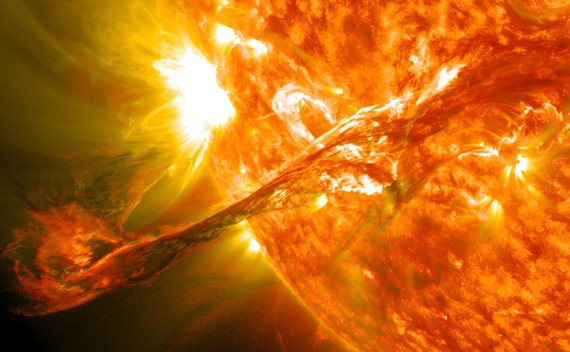 Many people think of space as a silent, empty void and the Sun as only a distant source of light and heat. Not true. The Sun and the Earth are connected in more complex, intimate, and sometimes dangerous ways.

The Sun continually ejects high-energy electrons, protons, and other nuclei that bombard the Earth, producing space-weather effects such as the beautiful northern lights but also others that can destroy satellites and disrupt our lives here on Earth.

The particles flowing from the Sun to the Earth make up the "solar wind," which sometimes blows as a gentle breeze and sometimes rages like a hurricane. The Earth's magnetic field captures and traps some of the solar wind in a region encircling our planet called the Van Allen radiation belts--a region where almost all of our satellites operate. During bad space-weather conditions those satellites are at risk.

For years, space scientists have portrayed the radiation belts as two distinct donut-shaped regions in space--a small, quiet belt 400 to 6,000 miles above Earth and a larger belt at about 8,500 to 36,000 miles. Only the outer belt was believed to be affected by all but the most intense space storms. Recent research by several of us here at Los Alamos National Laboratory, as well as NASA, the New Mexico Consortium, and others, however, has painted a new picture, with important implications for everyday life and national security--but more on that in a minute. First it's important to understand the threat posed by the Van Allen belts and the storms in space launched by the Sun.

The Van Allen belts are composed mostly of electrons with such high energy that they penetrate the outer skin of a satellite the way X-rays penetrate your skin and, like too high a dose of X-rays, they can deposit dangerous levels of radiation inside. Huge explosions on the surface of the Sun can hurl solar wind at the Earth at speeds over two million miles per hour. The resulting space storms here at Earth swell and intensify the Van Allen belts. Those storms have effects on the surface of the Earth, too, interfering with GPS-based applications, military navigation systems, shortwave radio signals, and radar, and also by inducing destructive electric current in pipelines and power lines.

One such storm shut down the electric grid in Quebec, Canada, in 1989, turning out the lights on millions of people. Electric utilities across the U.S. Northeast lost power and struggled to keep the blackout from spreading, drawing on electricity from across the country. In Europe, radio signals were jammed. In space, high-energy electrons rocked satellites as their sensitive electronics reeled under the onslaught and the space shuttle Discovery experienced anomalies with its fuel cells.

Vulnerability to space weather isn't just inconvenient. It is so serious that the White House recently issued a strategy and action plan to address the threat. Current precautions include building satellites with heavy shielding and other protective measures and taking them off-line entirely in anticipation of a storm, without knowing if that storm will be truly harmful. These measures are both inefficient and sometimes ineffective.

As we rely on satellites more and more for everything from Google Earth to the internet itself, we need more capable, more "weather-resistant" satellites. We also need better space-weather forecasts.

Space weather plays a role in national security too. If something goes wrong with a satellite, we need to determine whether natural causes or a hostile act caused the problem. Knowing more about the weather in space helps us make that call. For decades Los Alamos has designed and built space-based sensors to detect emissions from potential nuclear events here on Earth and to study natural and man-made radiation in space. The Lab's experience made us a natural partner with NASA on the recent Van Allen Probes mission, which launched two Los Alamos-designed instruments on two NASA satellites to study space weather and the Van Allen radiation belts.

Past studies of the Van Allen belts focused on electrons at only a few energy levels. But we've now discovered, by studying a broad range of energies, that the Van Allen belts vary in size and configuration depending on their electron energies. The inner belt--smaller in the classic view--appears much larger than the outer belt at low-energies. Meanwhile, the outer belt is larger at higher electron energies. At the very highest energies, the inner belt structure appears to vanish. 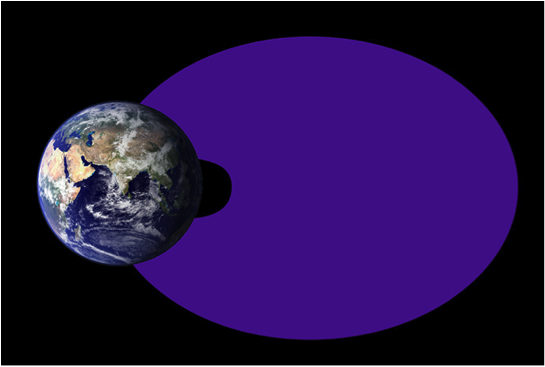 For years, space scientists thought the empty region between the two Van Allen belts filled in only during only the most extreme, once-a-decade geomagnetic storms. New research shows that lower-energy electrons fill this space during almost all such storms. Image courtesy NASA Goddard/Duberstein.

This new information gives insight into which type of geomagnetic storms are likely to zap satellites or ground-based infrastructure. Knowing that, we'll be able to create space-weather forecasts to guide the people who manage satellites, communications networks, electric utilities, and other assets during a storm. Operators can then batten down the hatches as necessary. Satellites will no longer have to be over-designed with extreme space-weatherproofing measures or shut down unnecessarily for every threatening storm.

As space gets more crowded and countries vie for dominance, understanding space weather becomes even more important. Just as better atmospheric weather forecasting helps everyone prepare for hurricanes, blizzards, and droughts, better space-weather prediction promises the timely "heads up" needed to fend off the worst of what the Sun throws at us.