Once the home to archive driven, heavily narrated non-fiction shows featuring Nazis, sharks and WWII airplanes, a large part of cable television has opened its arms to truck drivers, crab fishermen, pawnshop owners and the denizens of Louisiana swamps as the siren song of the duck call has demonstrated that there are ratings and heaps of ad dollars in them-thar bands of working class heroes. 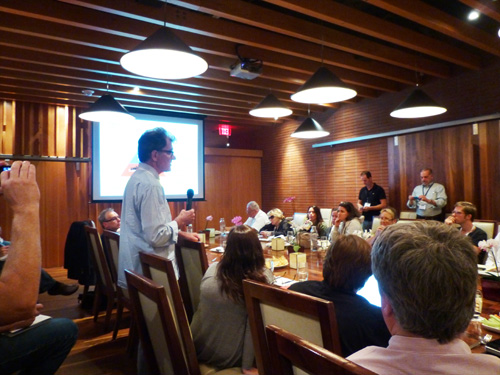 The fight to entice the hordes of cubicle-dwelling, working males to tune in every week to programs portraying lives they don't lead has become a blood sport among executives of rival networks.

"It's a viciously competitive cycle," said Peter Hamilton, programming consultant and publisher of DocumentaryTelevision.com, while speaking last week at the documentary and reality conference Westdoc. "Network executives are given less and less time to move the needle, and they're fired if they don't."

The success or failure of a show or series to deliver just the right audience in the right quantity is constantly under a microscope. "All networks parse their audience by the minute," said Hamilton.

As the pressure has mounted to deliver eyeballs, "they've moved from what used to be hits for them to wanting new, game changing programs to fuel their expansion," said Ed Hersh, a co-presenter with Hamilton. As a long time programming executive with Discovery Communications (Investigation Discovery, the Military Channel), Court TV and A&E Networks, Hersh knows what it's like to be sitting in the decision maker's chair. He's now sharing that experience as a consultant under the banner of StoryCentric.

In search of those game changers, channels are under increasing pressure to produce big results, which also encourages "networks to work with producers who have created hits for others," said Hersh.

If "Ice Road Truckers" is a hit on one network you can be sure that a rival channel will be seeking a meeting with the producers to get trucking with them.

The fear factor in programming means that even as they search for the next big thing, networks will be bringing in the clones and avoiding things that have never been done. There's just too much money riding on every decision.

Non-fiction television's value has skyrocketed from its early days in the 1980s when it inherited a business based on documentaries originally produced to service the needs of "libraries and news executives," said Hamilton. The size of that business worldwide may have been about $100 million.

As the first non-fiction channels, A&E and Discovery came on the scene this business grew by the end of the 80s to $500 million fueled partly by the popularity of home video as well as the cable fees paid to the channels and advertising revenue.

This success spawned imitators and convinced the existing channels to create additional outlets based on subjects that had proven successful on their original channels. A&E spawned The History Channel and Discovery acquired TLC (the Learning Channel), Travel and more as these companies clamored for space in the cable pipelines snaking into our homes. They also launched channels around the world. These metastasizing entities exploded in value to around $30 billion. It was a boom time. All of these channels were "commissioning original programming," said Hamilton.

But they were only getting started. The real growth has occurred in the last ten years as reality programming fueled revenue has goosed the asset value of the sector up to $120 billion. The channels have become darlings of Wall Street and the producers who churn out the hits like Pawn Stars, Duck Dynasty, Cupcake Wars, Gold Rush Alaska, Deadliest Catch, Storage Wars and more are being rewarded for their success.

"Discovery alone spent an astounding $1.2 billion on programming in 2013," said Hamilton.
This is a far cry from the college AV department resources that John Hendricks the originator of Discovery relied on when he was making the move from his duties at the University of Maryland to launch his crazy idea of a channel that would be dedicated to the PBS documentaries he loved.

A few niches remain for those who still crave those programs. Along with PBS and HBO, "the last bastion" in the United States is the Smithsonian Channel "which invests more and more each year on high-quality, entertaining non-fiction," said Hamilton.

In addition to consulting, Hamilton is co-executive producer of A Shot to Save the World a Smithsonian special on Jonas Salk and the race to develop the polio vaccine. He and his co-EP, Steeltown Entertainment's Stephanie Dangel, created a traditional documentary film that tells an important story and features a rare interview with Bill Gates, whose foundation's priority is to eradicate polio. If you've overdosed on The Kardashians and Cupcake Wars the cure may be A Shot which premieres on the Smithsonian Channel on Thursday, October 24, which is World Polio Day.

This noble and compelling offering is the exception to the standard cable programming diet. The success of the monoculture of reality shows is prompting some documentary producers to look outside of the United States to find the money they need to make their films and to find audiences.

"The Europeans are still making lots of historical programming," said Hersh.
Hamilton agreed. "There's still an appetite for these docs in Europe and Japan. Don't be a parochial producer," he said.

Westdoc offered a few glimmers of hope for those pining for the glory days of doc centric cable. Belisa Balaban, the head of unscripted programming for Pivot TV, explained how this just launched channel will deliver entertaining non-fiction with a "socially relevant" side. Balaban said she wants to "weave in relevant stories to create important conversations" without being preachy. She was joined on a panel by Kathy Davidov, the executive producer for documentaries at the new Al Jazeera America. Davidov, who's a fan of classic cinema verite documentaries, is looking to fill her Sunday evening doc slot with limited series and feature length docs that relate to the "American audience" and give a "voice to the voiceless."

These new outlets and the opportunity to create so-called "blue chip" programs for the major channels as well as the aforementioned PBS, HBO and Smithsonian are clear signs that docs are not dead on domestic television. They've just been overtaken by the reality of the business of reality TV.

The good news "even as the definition of non-fiction is changing and expanding, there seems to be more demand for it than ever before," said Hersh.